Things We Love to Hate

Hate speech has become a divisive issue in order to exploit social prejudices for electoral gains. The Supreme Court has come down heavily on TV channels promoting and fanning religious and sectarian hatred as a means of increasing their ratings. Will anything change? 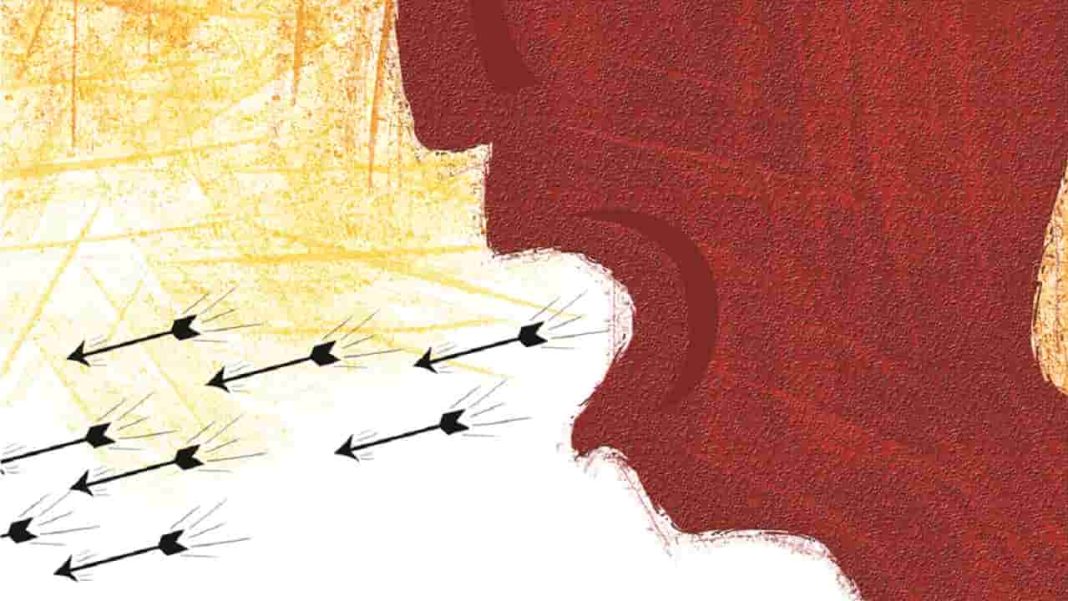 Calling the “visual media” the “chief medium of hate speech”, and questioning the government why it is “standing by as a mute witness when all this is happening” and treating it as “a trivial matter”, the Supreme Court came down heavy on the various TV channels pointing out that “hate speech can be in different forms… sort of ridicule a community” and its spread through the visual media can have a “devastating effect”. The comments were made by the bench of Justices KM Joseph and Hrishikesh Roy, who also asked the centre to state whether it proposed to come up with any law on the subject. It was also clarified by the judges that “we made the reference to this (visual media) because the chief medium of hate speech is apparently through the visual media. In a paper, somebody writes something, nobody reads…. Nobody has the time. But visual media has got a power which has been recognised by this court right from the case relating to censorship. The difference between visual media and print media is so clear—that it has got a devastating effect.”

Asking the government to submit its response within two week’s time, the apex court also said that as they can’t be taking over the powers of the legislature it was best to take up the Vishakha model and lay down some guidelines which will hold the field until the legislature comes up with a law on the matter.

In a democratic country like India, the line separating free speech and hate speech is indeed very fine. While free speech encourages free thinking and debate, hate speech suppresses thought and incites violence. As Martin Luther King Jr has rightly said: “Like an unchecked cancer, hate corrodes the personality and eats away its vital unity. Hate destroys a man’s sense of values and his objectivity. It causes him to describe the beautiful as ugly and the ugly as beautiful, and to confuse the true with the false and the false with the true.”

Even though hate speech has not been defined under any existing law in India, it has been described as “any kind of communication in speech, writing or behaviour, that attacks or uses pejorative or discriminatory language with reference to a person or a group on the basis of who they are, in other words, based on their religion, ethnicity, nationality, race, colour, descent, gender or other identity factor” by the United Nations Strategy and Plan of Action on Hate Speech.

1. Hate speech can be conveyed through any form of expression, including images, cartoons, memes, objects, gestures and symbols and it can be disseminated offline or online.

2. Hate speech is “discriminatory”—biased, bigoted, intolerant or “pejorative”—in other words, prejudiced, contemptuous or demeaning—of an individual or group.

3. Hate speech makes reference to real, purported or imputed “identity factors” of an individual or a group in a broad sense: “religion, ethnicity, nationality, race, colour, descent, gender,” but also any other characteristics conveying identity, such as language, economic or social origin, disability, health status, or sexual orientation, among many others.

Here are some examples:

During elections, in the absence of any specific law governing hate speech and rumour-mongering, the Election Commission of India employs various provisions of the Indian Penal Code and the Representation of People Act, 1951, to ensure that members of political parties or other persons do not make statements to the effect of creating disharmony between different sections of society. Political speeches during election season often assume a divisive tone in order to exploit social prejudices for electoral gains. However, this discourse must take place in an environment that does not foster abusive or hateful sentiments. Though political rivalry might encourage the use of unwarranted language, it is unwise to restrict speech that merely showcases the tendency to evoke unwanted circumstances without intention. In order to promote robust and healthy debate, it is important that a fine balance is struck between freedom and restrictions.

Even though the concept of free speech in India is still in its nascent stage, legally speaking, Section 295A of the Indian Penal Code punishes hurting the sentiments of religious believers through offensive or insulting speech. This is an anti-blasphemy law that was introduced as far back as 100 years ago in order to combat communal tension brewing between Hindus and Muslims. The same law is being used even today to punish any critique of religion, religious jokes or even at times statements of facts. The Section is basically a sword that is wielded by some to shut down the power of free speech not only for themselves, but also for everyone else.

In a democratic country like India, which is known for its unity in diversity, it is imperative that free speech is what it is claimed to be—Free. The citizens must be given the freedom to put forward their opinions on all subjects, including religion. Such opinion that proves to be distasteful has to be countered not by suppressing it, but by the force of moral and ethical criticism.

A stark contrast to the freedom of speech is the concept of hate speech. Hate speech is not speech that targets a religion or a religious figure per se, but a speech that targets a group of citizens by virtue of their (e.g., religious) affiliation and calls for discrimination against that group, or their exclusion from mainstream social life (for example, through boycotts).

Various judgments have been passed in this area in an effort to codify some law regarding the code of conduct of the political parties with special reference to the speeches given by them during the election season.

In the case of Pravasai Bhilai Sanghatan vs Union of India (2014), the Supreme Court referred to the Law Commission of India the question of whether the Election Commission of India should be given the power to de-recognize a political party, disqualifying it or its members, if the party or its members indulge in hate speech. The Law Commission of India’s 267th Report, however, neither answered the Court’s question nor made any explicit recommendations to Parliament to strengthen the Election Commission of India to curb this menace; it only recommended that the Indian Penal Code and the Code of Criminal Procedure be amended. The said report was submitted in 2017 wherein the committee had suggested various amendments. The experts, however, always have the same concerns—adding to the list of laws will not make any difference till the time the existing laws are implemented properly. Till the time the black letter law is implemented properly, grey areas shall continue to exist and the problems will persist.

The Indian Penal Code has made special provision for combating hate speech u/s 153A and 153B. While Section 153A talks about prohibiting “disharmony” or “enmity” between different sections of society, it can be clearly seen that it is not so much concerned about guaranteeing equal respect and concern to all members of society, but rather focuses on preventing group outrage. Again, the biggest shortcoming of this Section seems to be that the entire focus is put on “how” the individual or group feels about the speech.

Earlier, hate speech would usually rise in the run-up to elections. But now, with our changed media landscape, politicians have realised that something offensive said in one state could be magnified for direct political benefit in another state immediately.

Even though India has enough laws in place to check hate speech, something seems to be amiss. Hate speech laws in India require the executive to enforce them. And most times, it doesn’t want to act. Even though hate speech has not been defined in any law in India, legal provisions in certain legislations prohibit select forms of speech as an exception to freedom of speech. Apart from Sections 124A, 153A, 153B, 295A, 298 and 505(1) and (2) of the Indian Penal Code; Sections 8, 123(3A) and Section 125 of the Representation of the People Act, 1951, and Sections 95, 107 and 144 of the Code of Criminal Procedure also pertain to the act of hate speech to some extent.

The courts have time and again held that: “Our commitment to freedom of expression demands that it cannot be suppressed unless the situations created by allowing the freedom are pressing and the community interest is endangered. The anticipated danger should not be remote, conjectural or far fetched. It should have a proximate and direct nexus with the expression. The expression of thought should be intrinsically dangerous to the public interest. In other words, the expression should be inseparably locked up with the action contemplated like the equivalent of a ‘spark in a powder keg’.”

The reason that the courts have been reluctant to address the issue of hate speech is because it becomes akin to putting a control on the freedom of speech. The right to freedom of speech and expression is one of the most essential liberties recognized by democratic states. The concept of liberty has been primarily influenced by the principle of individual autonomy. The objective of free speech in a democracy is to promote multiplicity of opinions and to discourage herd mentality.

Looking at the international arena, the analysis of hate speech in different countries suggests that despite not having a general definition, it has been recognised as an exception to free speech by international institutions and municipal courts. The courts themselves have also developed certain tests to determine whether a particular statement will be covered within the ambit of hate speech or not. Once it has been established that there has been an interference with freedom of expression, the courts resort to a three-fold analysis to determine the legitimacy of such interference:

Furthermore, the courts must also see if the speech is offensive and projects extreme forms of emotion as every offensive statement does not amount to hate speech. The speech must also amount to incitement in order to be restricted. The status of the author of the speech is also of extreme importance. Thus interferences with the freedom of expression of a politician … calls for the closest scrutiny on the court’s part. On the other hand, the status of the targeted audience is also important in determining whether a speech can be limited. The potential impact of the speech has to be viewed to determine the speaker’s state of mind at the time the speech was rendered. And finally, every seemingly hateful speech may not be termed as a hate speech. The context in which the speech was made is essential in determining its permissibility.

In the words of Lord Reid: “…[T]hat the law shall be certain, and that it shall be just and shall move with the times.”

The need of the hour demands that careful circumspection needs to be undertaken regarding the laws on hate speech else India is in danger of becoming a regressive state with all its laws going back in time rather than forging ahead and creating history.