India’s long held position is that country specific resolutions are never helpful and dialogue is the way forward. Does its surprising abstention from voting on human rights in China serve its national interest? 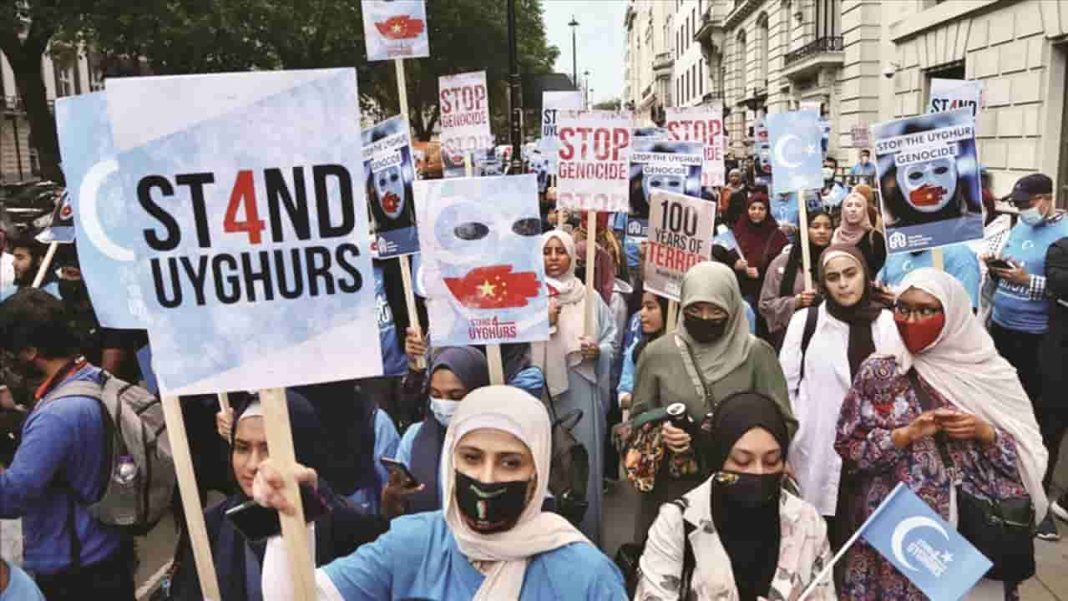 India’s abstention from voting on a draft resolution at the UN Human Rights Council (UNHRC) to debate on the human rights situation in China’s Xinjiang Uygur Autonomous Region (XUAR) on October 6, has surprised many at home and abroad. The draft resolution, moved by a core group of eight nations—Canada, Denmark, Finland, Iceland, Norway, Sweden, the UK and the US—could find support from only 17 members in the 47-strong Council. Nineteen others, led by China and most of the Islamic countries, including Pakistan, voted against it, confirming our neighbour’s clout in the UN body.

Since 2017, international civil society organisations and media have been highlighting China’s increasing rights violations to systematically brainwash and subjugate the Uygur people. Former UN High Commissioner for Human Rights Michelle Bachelet had recently submitted a scathing report on China’s coercive conduct against Uygur in XUAR. Had the resolution been voted, China would have been hauled up for the first time in the history of UNHRC to account for its terrible human rights record in XUAR.

It was reasonable to expect that India would vote for the draft resolution, particularly as China’s conduct at the UN had been hurting its interests on several issues relating to Pakistan’s support to jihadi terrorist operations. This has been going on for quite some time to suit China’s emerging strategic interests in the Af-Pak region.

Two years ago on January 20, at the behest of Pakistan, China tried to revive the Kashmir issue for “closed-door consultation” under “AOB” (Any Other Business) at the United Nations Security Council (UNSC). Its attempt miserably failed after all the other 14 members of this Council rejected it. That is a small consolation for India as China has also been repeatedly blocking the UN listing of jihadi terrorists based in Pakistan as global terrorists under the UNSC 1267 Al Qaeda Sanctions Committee. China had been placing them on “technical hold” without giving specific reasons for its action.

Last month, China had blocked for the third time in four months, a proposal by India and the US at the UN to blacklist Sajid Mir, a mastermind of Lashkar-e-Taiba in the 26/11 Mumbai attacks in 2008. The UN listing of Mir as a global terrorist would have led to the freezing of all his assets and subjected him to travel ban and arms embargo. Mir was the most wanted 26/11 terrorist in India. He also figures in the FBI’s list of most wanted terrorists and carries a bounty of $5 million for his capture and arrest. As early as August 2012, the US Treasury Department had designated Mir as a Specially Designated Global Terrorist, freezing all his property in the US.

In August, China blocked yet another proposal by the US and India at the UNSC to blacklist Abdul Rauf Azhar, the brother of Jaish-e-Mohammed (JeM) chief Masood Azhar and a senior leader in the terrorist organisation. He had carried out the attack in Pulwama on February 14, 2019, killing 40 CRPF personnel. For long, China had blocked the listing of Masood Azhar as a global terrorist by the UNSC, though he was the chief of JeM, which is listed by the UN as a global terrorist organisation. After blocking similar moves in 2016, 2017 and 2019, China relented only in May 2019 for the UN to declare Azhar as a global terrorist.

Some reports claimed the reason for China’s change of mind was “new factual evidence” of Masood Azhar’s activities provided by some countries. However, its action was probably prompted to help Pakistan’s case for removal from the “grey list” of the Paris-based international terror-financing watch dog—the Financial Action Task Force. This was evident from the alacrity with which Pakistani authorities issued orders to freeze assets of Azhar and slapped a travel ban immediately after the UNSC ruling.

After Pakistan became a key member of President Xi Jinping’s Belt and Road Initiative (BRI), China’s strategic interests in the region have become multifaceted. First and foremost is to protect China’s growing investments in BRI projects in Pakistan. The other is to ensure the safety of an increasing number of Chinese ex­patriates working in Pakistan. According to a Geo-TV report on September 22, 2021, over five million Chinese are expected to be working in Pakistan by 2025 under various development, industrial and other projects, according to a senior public health expert. Their security has become a major concern for China, particularly after targeted attacks against them in Balochistan.

China would also like to strengthen its strategic links with the Taliban after it came to power in Afghanistan. It has been maintaining contact with the Taliban all along to prevent any support to the Uygurs’ anti-China agitation in Xinjiang. In fact, China’s ambassador to Pakistan Lu Shulin was the first senior diplomat of any non-Islamic country to meet Taliban leader Mullah Omar in 2000. Omar is said to have assured him that the Taliban will not allow Uygurs in its ranks to launch attacks inside Xinjiang. It is significant that there have been no major attacks by Uygurs against the Chinese in Xinjiang in recent times.

Taliban’s rival Salafist outfit, the Islamic State-Khorasan (ISIS-K), has become active once again after the Taliban subdued it in and around Kabul and Nangarhar province in 2021. On August 19, ISIS-K claimed responsibility for a bomb blast in a mosque in Kabul which killed 21 worshippers, including Rahimullah Haqqani, an influential Taliban-linked cleric. The ISIS-K is said to enjoy financial and political backing from the parent organisation. This must be worrying for China because the members of the outfit have the ability to operate across the borders in Xinjiang.

China’s crackdown against the Uygurs, Kazakhs, and other predominantly Muslim ethnic minorities in Xinjiang, carried out in the name of fighting terrorism since 2017, is well documented. Given this background, why did India abstain when the UNHRC debated China’s human rights violations against Uygurs in Xinjiang?

Answering the question at a press briefing, Ministry of External Affairs (MEA) spokesperson Arindam Bagchi said: “India remains committed to upholding all human rights. India’s vote is in line with its long held position that country specific resolutions are never helpful. India favours a dialogue to deal with such issues.”

“We have taken note of the OHCHR (Office of the United Nations High Commissioner for Human Rights) Assessment of human rights concerns in the Xinjiang Uygur Autonomous Region, People’s Republic of China. The human rights of the people of Xinjiang Uygur Autonomous Region should be respected and guaranteed. We hope that the relevant party will address the situation objectively and properly,” he added.

The MEA explanation may sound Machiavellian. But India has traditionally voted against or abstained on such country specific resolutions at the UNHRC. Generally, India’s stand at the UN is nuanced to serve its national interest while maintaining its focus on core issues. In other words, it is an expression of realpolitik.

A recent example was India’s abstention on the resolution on “Promoting reconciliation, accountability and human rights in Sri Lanka”, adopted by the UNHRC at the 51st Session in Geneva. Twenty of the 47 members voted for the resolution, seven against, including China and Pakistan and 20 abstentions including India, Japan, Nepal and Qatar.

In a statement during the adoption of the resolution, India’s representative Indra Mani Pandey said that while India has taken note of the commitments by Sri Lanka on implementation of the measures in the spirit of the 13th Constitutional Amendment and the early conduct of provincial elections, “we believe that the progress towards the same remains inadequate.” In other words, while India stood for the promotion of reconciliation, accountability and human rights in Sri Lanka, it would like the island nation to fulfil its commitments to India as per the 13th Constitutional Amendment and conduct the much-delayed provincial elections.

This is amply borne out by India’s stand on a spate of resolutions at the UNSC, UN General Assembly and UNHRC relating to Russia’s war in Ukraine that started in February. It took India six months before it voted against its trusted friend Russia for the first time during a “procedural vote” at the UNSC. It was in favour of inviting Ukrainian President Volodymyr Zelenskyy to address a meeting of the UNSC through a video-conference; Russia cast the lone vote against it.

A few days ago, for the third time in the past few months, India voted against Russia when it wanted a secret ballot on a draft resolution to condemn its “annexation” of four regions of Ukraine at the UN General Assembly. The resolution will be coming up for voting during the week. External Affairs Minister S Jaishankar was asked at an interaction in Lowy Institute in Canberra about how India would vote on the resolution? He replied: “Nobody puts their decision to vote out in front. You take the call when you have to…A large part of the world today is hurting because of this conflict…because their lives are impacted in a very damaging manner.”

Jaishankar in his book “The India Way: Strategies for an Uncertain World”, written after his retirement from the MEA and before he became a minister, explains the essence of foreign policy making by the present government. It calls for realism in terms of a policy which is not idealistic. A policy that does not believe achieving peace is easy and cheap. And a policy which perceives national security as a key component of foreign policy. This forms the backdrop of India’s stand on various issues in international relations.