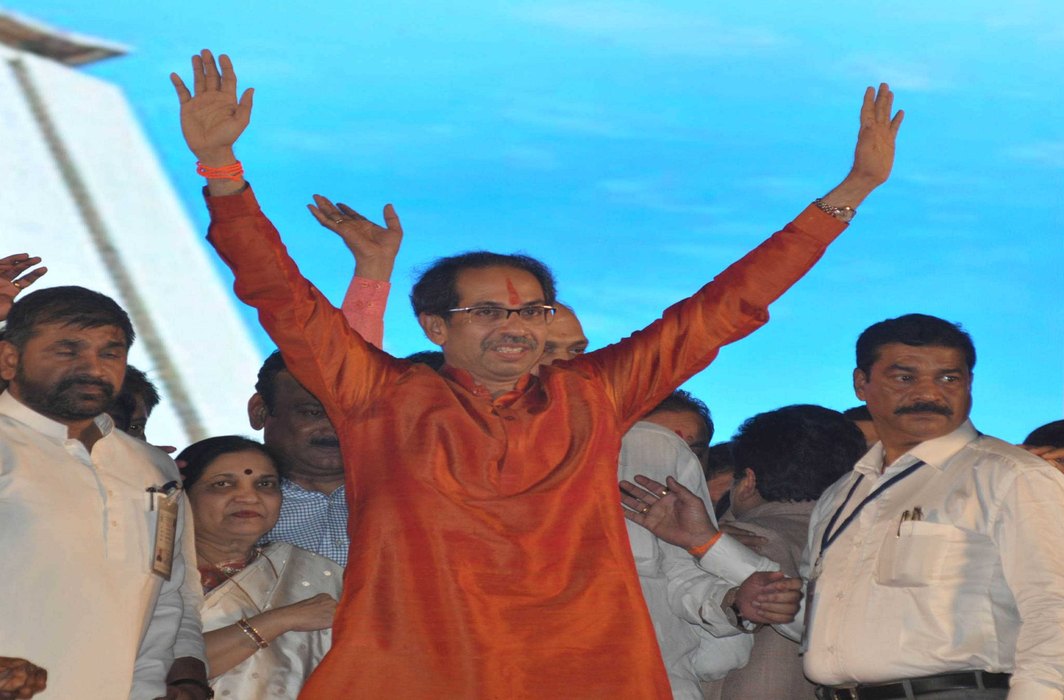 Above: Shiv Sena President Uddhav Thackeray greeting supporters after being sworn in as the CM of Maharashtra at Shivaji Park in Mumbai/Photo: UNI

Startling developments, where democratic norms were thrown to the winds, have brought into focus the sterling role of the apex court as the sentinel of the Constitution and the questionable one of the governor

The dramatic events in Maharashtra have finally ended with the Shiv Sena-NCP-Congress combine firmly in the saddle. History has repeated itself uncannily. Last year in Karnataka, the assembly elections saw the BJP with 104 seats fall tantalisingly short of the majority (113), but emerging as the single largest party. In Maharashtra recently, the BJP with 105 seats was not that close to the majority (145), but still emerged as the single largest party. In both cases, the Supreme Court ordered a floor test under the Pro-tem Speaker within 24 hours, but the concerned chief minister-designate resigned ahead of it. The BS Yediyurappa government in Karnataka lasted two days, while the Devendra Fadnavis government in Maharashtra, three days. The tactics of the BJP failed in Karnataka initially, but worked in the long run. In Maharashtra, it may not be that easy because of the larger gap between the strength of the party and the crossing line.

Of course, there were some differences in the details in both states. A major difference was the number of MLAs ostensibly attempting to desert the party/coalition. While in Karnataka, it was less than a score, in Maharashtra, a whole party was endeavoured to be hijacked. The question being asked was that with two leaders (Ajit Pawar and Jayant Patil), whose whip would NCP MLAs be obliged to follow while voting during the floor test. A whip is a matter of internal discipline of political parties and comes into the picture in the application of the anti-defection law (the Tenth Schedule). It is not part of the rules of procedure and conduct of business in legislative bodies and has no relevance as far as the floor test is concerned.

Be that as it may, the Karnataka precedent made decision-making for the Supreme Court easy. In order to curtail unlawful practices, to avoid uncertainty and ensure the smooth running of democracy, the Court passed an interim order directing that the following procedure be followed for conducting the floor test:

The interim order of the Supreme Court was also facilitated by several previous pronouncements, led by the landmark and seminal judgment of the nine-judge Constitutional Bench in SR Bommai vs Union of India (1994), which, among other things, ruled that the majority of the government can only be tested on the floor of the House. It cannot be decided by the governor applying his discretion. The judgment also gave the governor the power to direct a government to prove its majority within a given timeframe in the legislative assembly. However, it held that the Speaker enjoyed overwhelming powers in running the business of the assembly. The judgment further stated that the court cannot decide or give direction on matters of resignation or disqualification of MLAs or MPs till the Speaker has decided the matter. The courts only have the power of judicial review. This judgment has stood the test of time.

The Court also referred to several of its previous pronouncements, beginning with the case of Shrimanth Balasaheb Patil v. Hon’ble Speaker, Karnataka Legislative Assembly and Others of 2019, wherein it had emphasised the requirement of imbibing constitutional morality by constitutional functionaries. Further in Union of India v. Shri Harish Chandra Singh Rawat, (2016) the Court had held that being the sentinel of the Constitution, it is under the obligation to see that democracy prevails.

As far as convening a special session to conduct the floor test, the Court said that nearly two decades back in Jagdambika Pal v. Union of India, (1999), it had passed an order that a special session of the Uttar Pradesh assembly will be summoned after two days and the only agenda in it would be to have a composite floor test between the contending parties to see which one of them had a majority in the House. Similarly, ten years later, in Union of India v. Sh. Harish Chandra Singh Rawat (2016), again an interim order was passed to observe that the floor test should be conducted during a special session of the Uttarakhand legislative assembly summoned with the only agenda to seek a vote of confidence by the first respondent.

Further, in respect of giving a short notice to hold the floor test, the Court referred to Chandrakant Kavlekar v. Union of India (2017), in which, by an order on March 14, 2017, the governor of Goa was requested to ensure that a floor test be held two days later. Similarly, in G. Parmeshwara v. Union of India (2018), identical directions were issued in respect of the formation of government in Karnataka to test whether the chief minister so appointed enjoyed the majority support of the House, with the direction that the floor test be conducted immediately the next day.

Fortified with these precedents, the Supreme Court had no hesitation in ordering the floor test in Maharashtra the very next day, immediately after completion of the swearing-in of the newly elected members of the legislative assembly on November 27, 2019. This, however, is the interim order of the Court, which observed that having heard the submissions of the counsel on the issues of maintainability, extent of judicial review and validity of the governor’s satisfaction, it was of the opinion that they can be adjudicated at an appropriate time. For this purpose, eight weeks time has been granted to the counsel for the respondents to file their respective counter affidavits. A rejoinder affidavit, if any, has to be filed within four weeks after that.  The matter would be listed after 12 weeks.

Thus, the final verdict of the Supreme Court on the earlier midnight decision of the governor to recommend revocation of President’s Rule to invite Fadnavis to form the government and to administer the oath of office to him and Ajit Pawar is yet to come. The governor’s move had come within hours of the declaration that the three parties had worked out a common minimum programme and would stake a claim to form the government. Democracy’s dark hour in Karnataka was followed by a midnight raid on the Constitution in Maharashtra.

On November 26, 2019, which was Constitution Day, President Ram Nath Kovind gave a call in Parliament for observance of constitutional morality among all organs of the state and persons holding constitutional posts. There is a need, therefore, to define, in clearer terms, the boundaries of the governor’s use of discretion in inviting a party or alliance to form a government.

After all, with great power comes great responsibility.