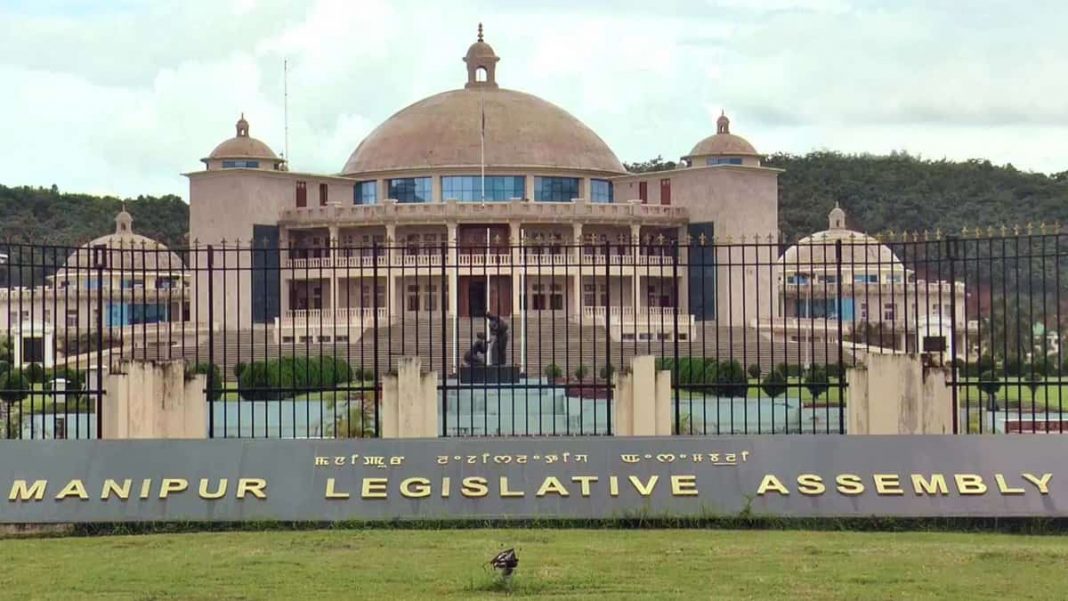 The BJP led coalition government won the recent confidence motion after high drama which showed the incredible ease with which MLAs manoeuvred themselves in a spirit of accommodation.

Who would have thought that the small yet beautiful state of Manipur would set an example worthy of emulation by legislators of other states in order to fur­ther expose the inadequacies of the anti-defection law?

The BJP’s win in Manipur in 2017 was historic. With no footprint in the largely tribal north-eastern states, the election marked the party’s entry there by toppling a 15-year-old strong Congress rule. The election itself was the most closely contested, with many MLAs from both the Congress and the BJP winning with narrow margins.

The Congress, led by Okram Ibobi Singh, with 28 MLAs emerged as the single largest party as opposed to 21 of the BJP. However, the BJP under the leadership of Nongthombam Biren Singh cobbled together a government by securing alliances with four MLAs of the Naga People’s Front (NPF), four of National People’s Party (NPP) and one each of the LJP and the TMC. Congress MLA Thounaojam Shyamkumar Singh also jumped ship to join the BJP. After the BJP assumed power, seven more Congress MLAs defected to it, bringing the total number of defectors to eight, all liable to be proceeded against under the anti-defection law (Tenth Schedule of the Constitution of India).

In the first instance, a petition for disqualification of T Shyamkumar was promptly filed with the Speaker, who chose not to take any serious action on it for close to three years. The Supreme Court put an end to the deliberate inaction of the Presiding Officer (Keisham Meghachandra Singh vs The Hon’ble Speaker Manipur) on January 21, 2020 and fixed a time limit of four weeks for disposal of the petition by the Speaker.

When the Speaker failed to comply, the Supreme Court in a landmark judgment stripped T Shyamkumar, who was the minister of town planning, forest and environment, of his office and barred him from entering the assembly, invoking its extraordinary powers under Article 142 of the Constitution (Keisham Meghachandra Singh vs The Hon’ble Speaker Manipur; March 18, 2020). The Speaker ultimately disqualified T Shyamkumar on March 28, 2020. Taking a cue from the Supreme Court order, on June 8, 2020, the Manipur High Court restrained the remaining seven defecting Congress MLAs too from entering the assembly until further orders.

With only 12 ministerial positions available and a large segment of that having been dispensed to the defectors, rumblings in the ruling coalition were inevitable. In June 2019, Singh divested Deputy CM and NPP MLA Yumnam Joykumar Singh of his finance portfolio, as well as the portfolios of BJP MLA Thongam Biswajit Singh. In April 2020, Joykumar was once again divested of his portfolios this time environment, forests and climate change. Ironically, under the Ibobi Singh administration, these two rivals were once the Congress chief minister’s closest aides. The two often worked together on issues that Ibobi Singh wanted “handled”.

Matters came to a head politically in June 2020. The BJP led coalition government in Manipur plunged into a crisis after six MLAs withdrew their support and three BJP MLAs quit the party and joined the Congress. However, four NPP MLAs returned to the coalition later after intervention by top BJP leaders and Meghalaya Chief Minister Conrad K Sangma, who is also the NPP supremo.

Though the government’s victory in the vote of confidence was a foregone conclusion, the absence of eight Congress MLAs from the crucial session showed some astute political manoeuvring by the chief minister. The BJP led government won the trust vote on August 10 after eight opposition Congress MLAs skipped the one day session defying the party whip. With this victory, N Biren Singh, earlier jolted by a string of desertions in the party, appears to have consolidated his grip on the ruling coalition.

Like all models, the Manipur one is still evolving. The Congress party in Opposition has demanded a fresh trust vote in the assembly on the ground that the previous one was inconclusive and procedurally illegal. In a memorandum presented to Governor Najma Heptullah on August 14, former chief minister and leader of the Congress party Okram Ibobi Singh cited violation of two rules (311 and 360) in the Rules of Procedure and Conduct of Business of the Manipur Assembly and two Supreme Court judgments—Union of India vs Harish Rawat (2016) and Shivraj Singh Chouhan vs Speaker of MP (2020).

According to the memorandum, soon after the debate and when the voting on the motion was to be taken up by the Speaker, the whip of Indian National Congress, Konthoujam Govindas, MLA, and leader of the Opposition, Okram Ibobi Singh, MLA, requested the Speaker to decide the motion of confidence by a division under Rule 360 of the Rules of Procedure and Conduct of Business in the Manipur Legislative Assembly as a whip had been issued to the Congress MLAs for the duration of the session. However, the Speaker, disregarding the request for a division in the House for the purpose of counting the votes of MLAs present in the House, used a voice vote to decide on the vote of confidence.

The memorandum further stated that the Speaker also violated Rule 311 of the Business of the House by not including Congress’ demand for a no-confidence motion first by Ibobi Singh on July 27 and later by two other MLAs, Khumuk cham Joykishan Singh and Meghachandra Singh, separately, on July 30 in the meeting of the Business Advisory Committee on July 31.

The memorandum also cited Supreme Court judgments in Union of India vs Harish Rawat and another and Shivraj Singh Chouhan & Ors. vs Speaker Madhya Pradesh in support of their request for a fresh floor test.

In Union of India vs Harish Rawat and another, the Supreme Court had inter alia directed that on the confidence motion, a division of the House shall take place and the members who are inclined to vote in favour of the motion shall sit on one wing/side and the others on the other wing/side. In Shivraj Singh Chouhan & Ors. vs Speaker Madhya Pradesh Legislative Assembly & Ors, the Supreme Court inter alia held that in directing a trust vote, the governor does not favour a particular political party. It is inevitable that the specific timing of a trust vote may tilt the balance towards the party possessing a majority at the time the trust vote is directed. The governor and the court must take measures to ensure that the sanctity of the trust vote is maintained.

What is special about this convoluted saga of the Manipur assembly’s manipulations, amputations and mutations (one may call it “maniputation” too) is the relative ease with which the members negotiated the sharp twists and turns of political manoeuvres in an incredible spirit of accommodation, which is the hallmark of the Indian political psyche. Granville Austin, in his book, The Indian Constitution: Cornerstone of a Nation, paid glowing tribute to the principle of accommodation which, according to him, is India’s original contribution to constitution-making in a federal context. It is the ability to reconcile and harmonise, without changing their content, apparently incompatible concepts, which are made to work simultaneously at different levels.