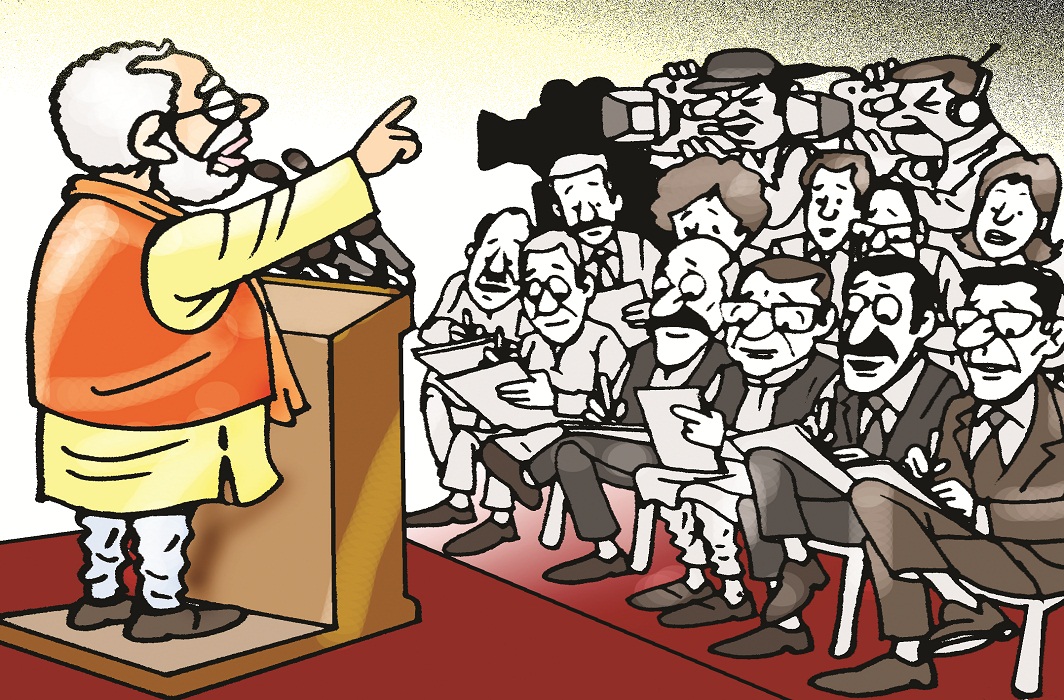 It has been a hugely significant year for the media, as it struggles to come to terms with its bipolar disorder, swinging from one extreme to another over the course of 2016

History will record 2016 as the year the media in India rediscovered itself and its primary role. It took 11 long and painful months to reach that understanding, and acceptance, but it just may have been worth the wait. The word of the year was declared as “post-truth” and it described the Indian media with embarrassing accuracy. Just as AD, or Anno Domini, was replaced by after Demonetisation in the records of contemporary India, it also proved a turning point for the press. Post-truth was a phrase that became legal tender after Brexit and the US elections. It referred to the trend in which journalists abandoned their traditional world of facts and entered one of smoke and mirrors. There was one man responsible for that in America—Donald Trump. One man was also responsible for its transference to the Indian context— Narendra Modi. Larger than life, bombastic, boastful, innovative, entertaining, charismatic and authoritarian in equal measure, the master salesman parlayed his vision of utopia to a people desperate for change and a position at the global high table. If they bought it in full measure, so too, in varying degrees, did the Indian media.

Never has India been so bedazzled by a leader who pledged, over and over again, to lead them out of darkness into empowering light, and to break free from the constraining cycles of history. Mrs Gandhi used the Emergency, the family name and a military victory in 1971 to rally the masses behind her and in the process, manacle or manage the media. Modi has used his charisma, thumping his 56 inch chest, a storm of slogans, surgical strikes, messianic zeal and an audacious power play to appeal directly to the sweating masses, in the process turning objectivity into awe and even idolatry. The media was not immune thanks to fawning corporate owners and political reporters and editors who wear their proximity to power like a badge of honour and came under his spell. The paradox was evident; his disdain for the media was evident in that he gave no interviews except to the converted and banned them from travelling with him on Air India One, and yet, vast sections of the media lost sight of their traditional role—to inform, educate and act as a bridge between the ruler and the ruled. Instead, in their eagerness to explain the Modi phenomenon, they actually became part of the narrative.

2016 introduced us to some more, led by Arnab Goswami and his bully pulpit at Times Now. Adopting the Sangh Parivar’s mantra—aggressive nationalism at every opportunity—India’s most divisive and deafening news anchor became a flag bearer for the Modi dispensation, even attacking his own tribe in the media for taking a critical stand.

The BJP had its supporters in the media but these were well known thanks to their regular appearance on news television panels. 2016 introduced us to some more, led by Arnab Goswami and his bully pulpit at Times Now. Adopting the Sangh Parivar’s mantra—aggressive nationalism at every opportunity—India’s most divisive and deafening news anchor became a flag bearer for the Modi dispensation, even attacking his own tribe in the media for taking a critical stand. He was not alone. Subhash Chandra’s Zee News was not far behind in their pro-establishment coverage, even fudging a video of Kanhaiya Kumar at JNU to “prove” his anti-nationalism. Just as in a Trump-obsessed America, the so-called ‘Alt Right’ media emerged from the fringes and into the mainstream, much the same was happening in India, complete with trolls and fake news. Other independent media outlets, with some notable exceptions, were “accommodating” to use a bureaucratic euphemism. Modi had introduced them to a brave new world and most of the media fell in line, more in hope than conviction.

Even in Opposition-ruled states, there were warning signs that taking on the powers-that-be would be detrimental to financial health. Aveek Sarkar, the legendary owner of the Kolkata-based Anandabazar Group, took on chief minister Mamata Banerjee in a no-holds barred attack through his newspapers and TV channel, with no pretence of objectivity, leading up to state elections. She won, he lost. He was replaced by his brother and the media house is still licking its wounds, financial and editorially.

Indeed, in subtle and not so subtle ways, the Modi government did much the same with media houses which showed independence. NDTV’s Hindi channel was given a farcical one-day ban, revoked after angry protests from the Editor’s Guild. The editor and his senior colleagues at Outlook were asked to leave after a cover story embarrassed the RSS.

During the Emergency, journalists had been asked to bend but crawled, as LK Advani famously put it. Under Modi, paper tigers became purring kittens and objectivity became an inevitable casualty

Intimidation was one method but generally the media coverage was positive, almost as if self-censorship had been imposed. It was the Modi Effect in action. The media failed to fully grasp the hollowness of the populism that Modi was peddling and its wider ramifications. During the Emergency, they had been asked to bend but crawled, as Advani famously put it. Under Modi, paper tigers became purring kittens and objectivity became an inevitable casualty. The ones who stood firm, resisting pressure and financial scrutiny, were becoming rarer to spot. Many of the “resisters” were in the online space which was still to pose a challenge to mainstream media outlets. The biggest casualty was credibility. At no time since the Emergency in 1975 has the media in India lost the trust of the public as much as it did in 2016.

Then a strange thing happened on the way to the bank. November 8, arguably as significant a date as 15/8 (Independence Day) or 25/6 (The Emergency), would prove a major turning point for the media. Hailed at first as a bold, even brilliant move, demonetisation became the litmus test for the media as its negative impact started to far outweigh the positive. The press, for the first time since Modi’s ascension, started to question and criticise, and became what it was always intended to be—society’s watchdog. Also for the first time, the criticism became personal and directed at the man who had amassed a level of popularity unmatched in contemporary Indian history, a demagogue. Even the pink papers, moonstruck by his huge leaps of imagination and promise of an economic nirvana, became his harshest critics.

The ultimate turnaround came with Firstpost, the online news site owned by Modi fan and loyal supporter, Mukesh Ambani, hitting out at the move and directly attacking Modi. It was, for the media, nothing short of a catharsis. By the end of the year, objectivity had returned. The media had rediscovered its raison d’être and its voice. The crucial pillar of democracy has been shored up but, ironically enough, because of another leap of the imagination by Modi. It is, for the media, like being back from the brink. The Modi spell has been broken. Now, they face another challenge—to regain the public trust.