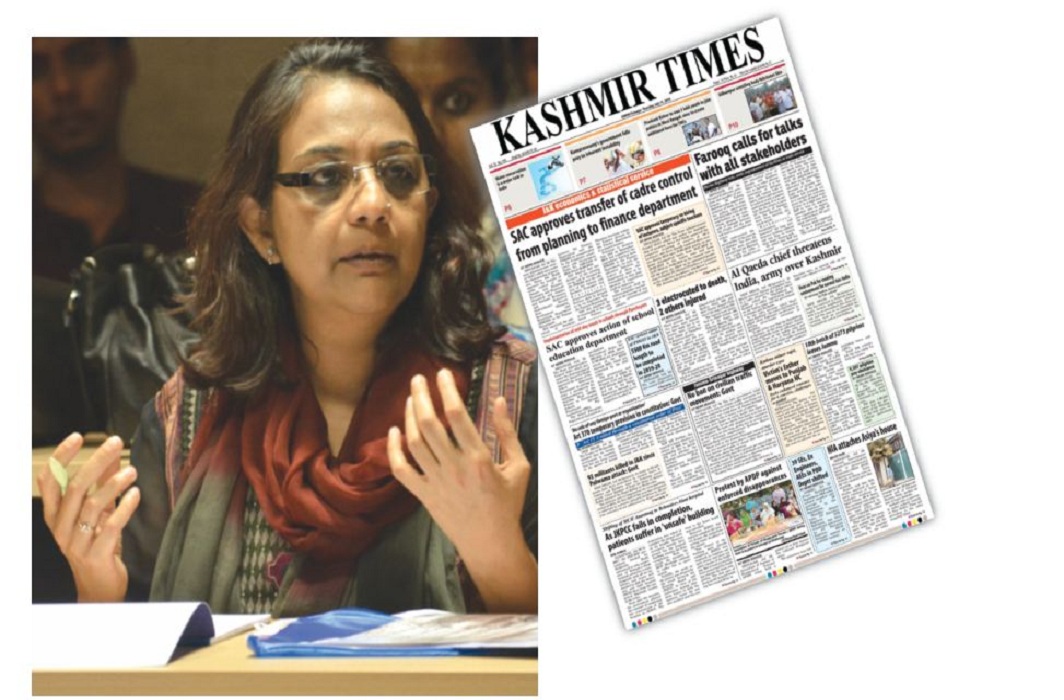 It is unusual to see a Hindu name, that too of a woman, featuring on the masthead as editor of a newspaper in Kashmir, but Anuradha Bhasin is the executive editor of Kashmir Times, a leading English daily in J&K. She has the lineage and power of her pen and conviction to stand tall amongst all her male contemporaries.

Bhasin is now making headlines after she filed a petition in the Supreme Court recently, seeking removal of restrictions imposed on the functioning of journalists in the region after the revocation of Article 370. She called for restoration of communication services and freedom of movement for journalists in Kashmir.

The Supreme Court passed the petition on to the registrar but Bhasin, a peace activist and daughter of Ved Bhasin, popularly called the “Grand Old Man of English Journalism in J&K”, who founded Kashmir’s oldest daily, is a fighter as is her lawyer Vrinda Grover.

Anuradha said: “We had adapted ourselves to the crisis. But this time it is worse than a crisis… We were actually dependent on the news coming out from New Delhi. Can you believe it!” The Delhi-based Editors Guild of India has also urged the government to take immediate steps to restore normalcy for the media’s communication links.

Author and columnist Shobhaa De is never far from controversy, largely thanks to her outspoken nature and the habit of shooting from the hip. She’s back in the limelight again after former Pakistan High Commissioner to India Abdul Basit claimed that in 2016 he had influenced one of her articles on the Jammu and Kashmir dispute asking for a plebiscite to resolve the crisis.

De has come out all guns blazing in calling Basit’s version “dangerous, malicious and unfair to anybody who believes in the truth” and says she met him once briefly at the Jaipur Literature Festival when she was with a group of people at a publishing reception.

However, the truth is that she did write with some passion and feeling on Kashmir in the wake of the death of Hizbul Mujahideen commander Burhan Wani in 2016. In her regular column in The Times of India, titled “Burhan Wani is dead but he’ll live on till we find out what Kashmir really wants,” her final paragraph said this: “Kashmir is a love story. A dream. A fantasy. Kashmir is a poem… an elegy. Why shatter its pristine beauty with ugly politics? Why not display enough moral courage and talk? Let sane voices prevail over lethal bullets. Tough. But not impossible. Let’s see if the present government has the guts to go ahead with a referendum to resolve the Kashmir crisis once and for all. Let’s end the lingering pain in the region and allow Kashmiris to live in peace, with the dignity and harmony they are entitled to.”

De now defends her article as the voice of a true patriot and slams Pakistan for fuelling the fire at an epochal time in the history of Kashmir.

The Karnataka-based Deccan Herald newspaper with seven editions and an influential voice in the region, has opted for a major makeover. It’s latest edition sports a new masthead in aqua blue, a colour intended to attract younger readers.

It is the first major re-design in the newspaper’s 70-year-old existence and no expense was spared. The new layout has been designed by Edinburgh-based Palmer Watson Words and Pictures design agency. As part of the redesign, a new weekly business section has been introduced along with a new Sunday opinion page and a supplement called “Showtime” that focuses on showbiz. The paper is also planning a new tagline to replace the existing “The Power of Good”.