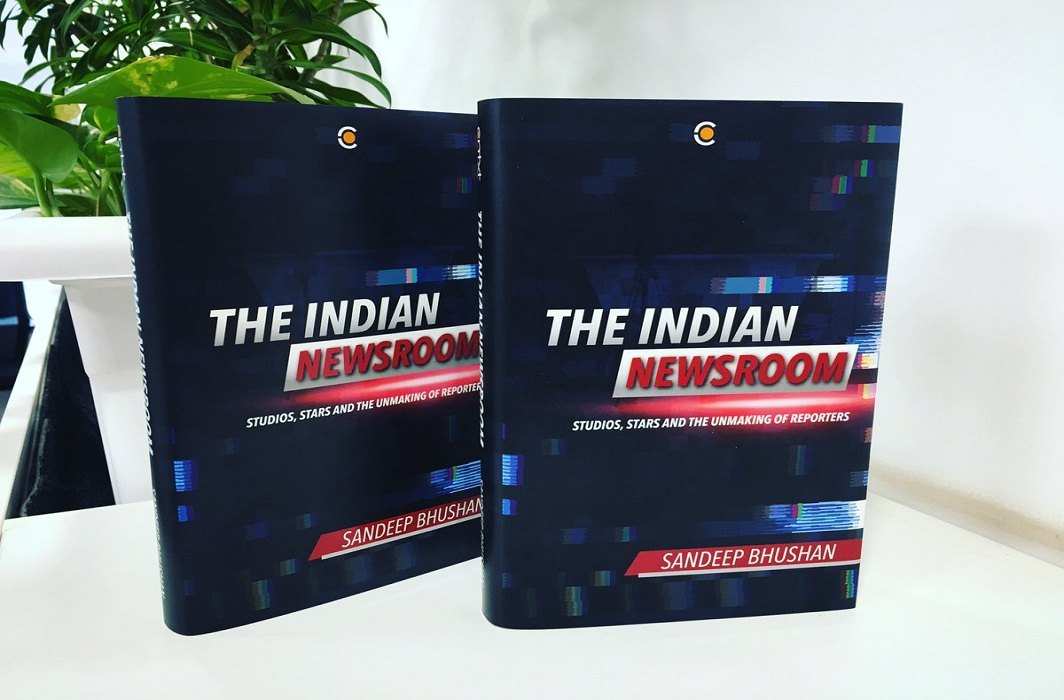 Television news is now an agenda-driven profession purveyed by corporate ownership with the editorial control and content decided by star anchors. So says a new book, The Indian Newsroom, authored by senior television journalist Sandeep Bhushan. The book illustrates some disturbing aspects of the Indian television news scene, including “access” journalism (people hired purely because they have access to the Modi apparatus), marginalisation of reporters, power games in the newsrooms and the rise of the “star system”. Bhushan calls upon his 20 years of experience as a TV journalist (NDTV, Headlines Today) to lay bare some uncomfortable truths about the TV news business. What is most disturbing, according to Bhushan, is the discreditation of the liberal media and the parallel rise of a powerful right-wing ideological movement among journalists.

He lists cases where journalists have been fired for reporting against the Modi government. The establishment, he says, arm-twists promoters, arm-twists editors, and in turn the reporter gets arm-twisted. This has resulted in genuine news content being driven out. Stars, he adds, are the ones who know everything and the anchor becomes a brand, deciding and manipulating news and eliminating the role of reporting.

It’s now become a popular series on television entertainment channels to have kids as young as four or five doing Bollywood-type gyrations on dance shows. The parents seem to love it but it is definitely vulgar and inappropriate: so believes the Ministry of Information and Broadcasting which has now issued an advisory to all private satellite television channels asking them to exercise restraint and display sensitivity and caution while showing reality shows and programmes that feature children. The advisory was issued after it was noticed that several dance-based reality television shows portray young children performing dance moves that were originally performed by adults in movies and other popular modes of entertainment. “These moves are often suggestive and age-inappropriate. Such acts may also have a distressing impact on children, impacting them at a young and impressionable age,” the official statement said. Some of the popular dance reality shows for children on private channels include Dance India, Dance Little Masters, Super Dancer and Dance L’il Masters besides other popular formats like Sa Re Ga Ma Pa L’il Champs, Indian Idol Junior, and Sabse Bada Kalakar. Last year, the video of playback singer Papon kissing a minor participant on music reality show The Voice India Kids 2 had sparked a discussion on the dark side of reality TV shows featuring children.

Star Sports, aiming to make a killing with its exclusive rights to broadcasting the 2019 Cricket World Cup, could be revising its estimated revenue thanks to the number of games that have been washed out. Even the India-Pakistan game, for which Star Sports hiked its regular advertising fee by charging a premium—a 10-second spot cost Rs 25 lakh—had estimated a total inventory of 5,500 seconds. The inventory couldn’t be met as rain regularly interrupted the match. The channel is currently compensating the free time commercial (FTC) on washout games by offering “make-goods”, wherein advertisers earn credit and the particular ad is run or re-run. With the tournament reaching a crucial stage, any more washouts means Star India could be looking at huge losses. Star India sells ad spots in different packages—the full series, select India matches and standalone India-Pakistan matches. Originally, the way to offset losses because of rain was to get insurance but now, with the weather becoming such a factor in almost every match, even insurers are backing out or raising their rates to exorbitant levels.