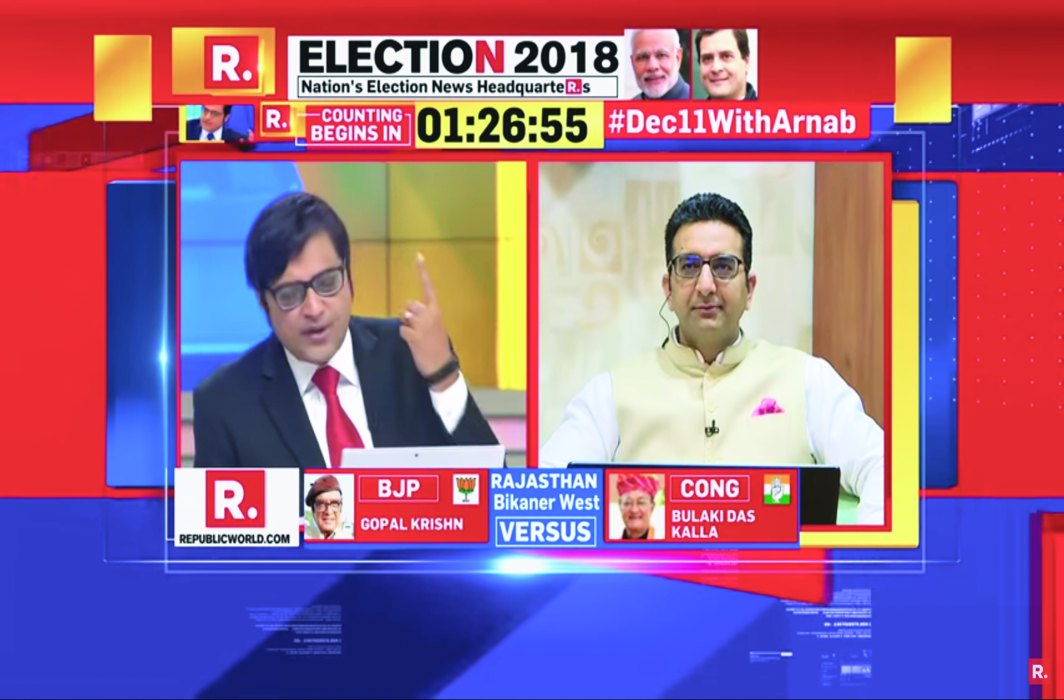 His Master’s Voice, which is now the commonly used nickname to describe Arnab Goswami’s  Republic TV which out-foxes America’s  Fox TV in its  display of sycophancy in the garb of journalism, was at its irresponsible best during the telecast of the recent assembly poll results. At the drop of a hat Goswami would feature a standard press release from BJP headquarters as an “exclusive news break”. One example was his sudden announcement of a “major news development”. He jumped out of his chair at the anchor desk and rushed towards a reporter holding a piece of paper in her hands, screaming that she had just scooped a major earth-shattering development. The “scoop” was the official tally of how many rallies Prime Minister Modi had addressed in Rajasthan during the campaign.

One of the more intriguing exchanges recently on TV channels was on NDTV when the studio panel was grilling Congress wunderkind Sachin Pilot via video link from Jaipur. The panel included veteran politician Farooq Abdullah, who is also Pilot’s father-in-law—his daughter, Sara, is married to him. When his turn came to ask questions (Pilot was apparently not told that Abdullah was on the panel), Abdullah said: “Congratulations, what we will see is how you people perform in 2019…On you, a nation is looking, therefore don’t beat drums of victory as yet. Work as hard, remain united. What is your answer?” Pilot replied: “The real challenge is four months later, but the party and all of us in Rajasthan are prepared to give the BJP a defeat.” Abdullah then asked: “Are you going to get young people in?” Pilot responded: “People who have worked 30 to 40 years have a lot to offer. It has to be a symbiotic relationship.” The 81-year-old Abdullah said: “I also believe you have to blend old and young”. Pilot cut in, grinning: “I may become old one day, but Dr Abdullah will not become old at any point.”

A familiar face has been missing from TV screens—veteran anchor Vinod Dua whose video show Jan Gan Man ki Baat was yanked from The Wire last October following accusations of sexual harassment by filmmaker Nishtha Jain. The Wire’s editors set up a five-member panel to look into the allegations and the probe is still on. Dua, however, has literally switched channels and will now be seen on HW News, run by former advertising professional Sujit Nair. The HW News Twitter handle has put out a promo where Dua says that a large section of the media has become sarkari or darbari. He says that there is one voice that is fearless (bekhauf) and unstoppable (bebaak), presumably his, and it ends with him announcing that he will be appearing on HW Hindi from Monday through Thursday, every night at 9 pm.

What goes up must come down, goes the old saying. That’s what happened to Janam TV, a BJP sponsored Malayalam channel. Launched in 2015, Janam languished among the also-rans in an already crowded news TV space in Malayalam that included established players like Asianet, Manorama, Mathrubhumi, News18 Kerala, Jaihind, People TV and Reporter TV. And then came September 29 and the Supreme Court verdict on Sabarimala that allowed women of all ages to enter the Lord Ayyappa temple. The channel’s hardline editorial stance during coverage of the standoff between the pro-women’s entry and the anti-entry groups saw its ratings soar over three times in less than a month. It was unabashed, unapologetic and provocative in its backing of the anti-women’s entry groups spearheaded by the BJP, RSS and lesser-known Hindu zealot groups. Though it was pilloried for its reportage, the channel made a point. TV viewership data showed that while Janam TV’s impressions in the standard regional news target group for October averaged 7,500 immediately after the court verdict, it had grown to over 25,000 by November when Sabarimala resembled a war zone as the two groups readied for an eyeball to eyeball confrontation. After two months of tension, Sabarimala has showed signs of returning to normalcy. While that is good news for all stakeholders, it certainly has not been for the right wing channel which is back to where it was—in the company of the also-rans.