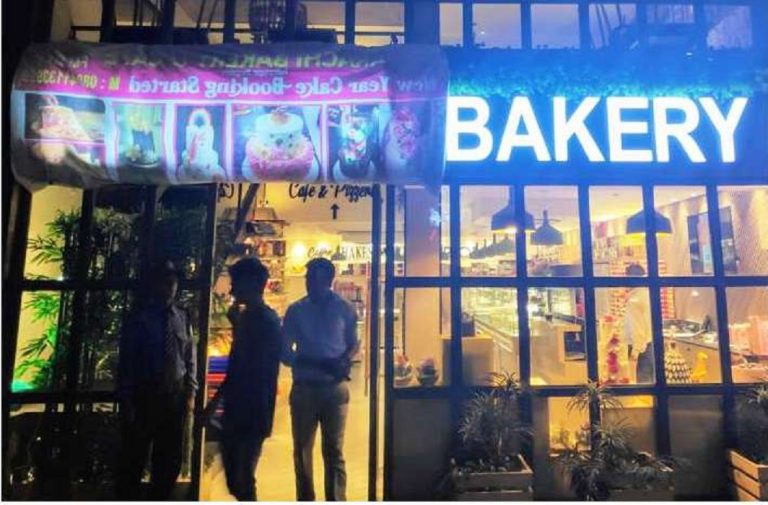 What’s in a name?

Mumbai’s iconic Karachi Bakery has not changed its name to “Prayag Raj Mithai Shop”, as was widely rumoured after a hostile Hindutva mob—opposing the name “Karachi” in the aftermath of the Indo-Pak hostilities—gathered last week outside the popular establishment.

Speaking to The News Minute, the manager of the Karachi Bakery outlet said: “The mob stayed for about half an hour. They demanded us to change the name. The men claimed to know people in the army. They thought we are from Pakistan. But we have been using this name for the last 53 years. The owners are Hindus. Only the name is Karachi Bakery. To satisfy them, we put up the Indian flag.” The name “Karachi” was covered with a hastily procured cloth screen.

Karachi Bakery was founded by Khanchand Ramnani, who migrated to India during Partition in 1947. Following the protest, Pakistan’s Twitterati shared photos of a popular bakery on their side of the border: “Bombay Bakery”. The word “Bombay” remains untouched. Responded writer and former LK Advani aide Sudheendra Kulkarni: “Fake patriots…By the way, I’ve founded #Mumbai-#Karachi Friendship Forum. Not very active for obvious reasons. But I’ll re-activate it!”

Pakistani Senator Sherry Rehman also pitched in: “Bombay Bakery is thriving in Hyderabad (Pakistan Sindh). Nobody wants to even think of changing their name. Erasing our past or diversity will only lead to myopic exclusions.”

Whose money is it, anyway?

After having splurged on the Kumbh Mela which gave BJP leaders, including Narendra Modi PR photo-ops for the coming elections, Chief Minister Yogi Adityanath is still on a spending binge. Money is being showered on political advertising to try and counter the impact of the Samajwadi-Bahujan Samaj Party alliance and the advent of Priyanka Gandhi Vadra in national politics.

During the last month, the state government spent some Rs 150 crore in media advertising, including print, TV, and outdoors. The money was spent in two phases, according to exchange4media. Providing details given by reliable sources, the website reported that the first tranche of Rs 90 crore went on Kumbh Mela-related advertising, starting January 15.

“It has been the most expensive Kumbh the world has ever seen with a budget of Rs 4,200 crore, which is more than three times the budget of the last Kumbh that was held in 2013. So the investment in advertisement was also huge. Adityanath started prepping for Kumbh soon after taking charge and all this requires publicity, especially because it’s a religious event which is every voter’s weak nerve. It was only viable to spend that much money because close to 150 million people were expected to be part of the festival this season,” an insider told the website.

Priyanka’s road show in Lucknow on February 11 received unprecedented national attention. The Yogi government’s reaction bordered on panic. “In a late-night development the same day,” exchange4media reported, the Uttar Pradesh government decided to buy front-page jackets of all editions of newspapers printed in the state for the next day to ensure their welfare programme advertisements would be on top of the front-page coverage of Priyanka’s rally.

This shows that Priyanka means business—especially for the media.

International opinion, on-and-off campus, has not taken kindly to the recent hysterical warmongering in the sub-continent’s media outlets. “Unfortunately mainstream media organisations, both in India and Pakistan, have failed to play their roles responsibly. They have been playing to galleries, giving information from dubious social media accounts and also actively using ultra-nationalistic rhetoric,” Ashok Swain, professor of peace and conflict research at Sweden’s Uppsala University, told Quartz. “On Tuesday, it was Indian media which went for over-the-top reporting of the highly doubtful success of Indian Air Force attacks on Pakistan’s terror training camp, and on Wednesday, it was the Pakistan media’s turn to pay it back over the reporting of arrest of the Indian pilot.”

But there’s also a cruel irony in this. Quartz quoted Sadanand Dhume, a resident fellow at the prestigious American Enterprise Institute, as saying: “But there may yet be an upside to the polarisation in media coverage. Paradoxically, the over-zealous Indian media and cowed Pakistani media may help prevent escalation of conflict …Indian TV is happy to run giddy stories about ‘hundreds’ of terrorists killed. Pakistani journalists won’t question their army’s claim that nothing much was hit. Everyone gets to save face, and in south Asia face matters—a lot.”

Once a celebrated activist, Madhu Purnima Kishwar’s transformation into a rabid right-wing troll and BJP sycophant has been appalling. The founder editor of Manushi, a venerable journal that advocated women’s empowerment and human rights, Kishwar has in recent years been in the news largely for her acerbic attacks against the Congress party, spirited and shrill defence of Narendra Modi’s alleged role in the Gujarat riots and for spreading fake news through her Twitter handle.

Recently Kishwar posted a tweet, conveniently qualifying it as information she got from a senior journalist, claiming that senior journalist and political commentator Arati Jerath was “gifted a luxury apartment” by real estate giant DLF “for appearing on every TV channel to defend (Robert) Vadra-DLF deal in 2012 after (Arvind) Kejriwal blasted Congress over it”. Her comment was made in response to one of her Twitter followers claiming that Jerath was gifted a penthouse by Vadra, the controversial husband of Congress general secretary Priyanka Gandhi, who is facing investigations for alleged money laundering and fraudulent real estate deals with the DLF group.

Kishwar’s comment against Jerath came days after the two had a heated exchange on a Republic TV debate anchored by the other BJP propagandist, Arnab Goswami. Several journalists who have known Jerath through her over three-decade-long journalistic career have dubbed Kishwar’s claim as a “blatant lie” and “smear campaign typical of BJP sympathisers”.

That Times Now and Republic TV spend much of their air time slamming the Congress party and its first family while singing paeans of Prime Minister Narendra Modi and the BJP is widely acknowledged. Celebrity editors of the channels, Navika Kumar and Arnab Goswami, who once formed the Congress-bashing pair at Times Now, have often made news themselves for their unambiguously biased reportage against the Nehru-Gandhi family.

According to industry reports the total number of satellite TV channels allowed by the Ministry of Information and Broadcasting (MIB) also saw a noticeable growth, from 524 in 2010 to 875 in 2018. The previous year, however, saw better numbers, a total of 888. DTH now has a subscriber base of roughly 67.53 million. There were six pay DTH service providers in 2016-17, “but after the merger of Videocon D2H with Dish TV India Limited, the number rests at five pay SD channels,” industry journals reported.