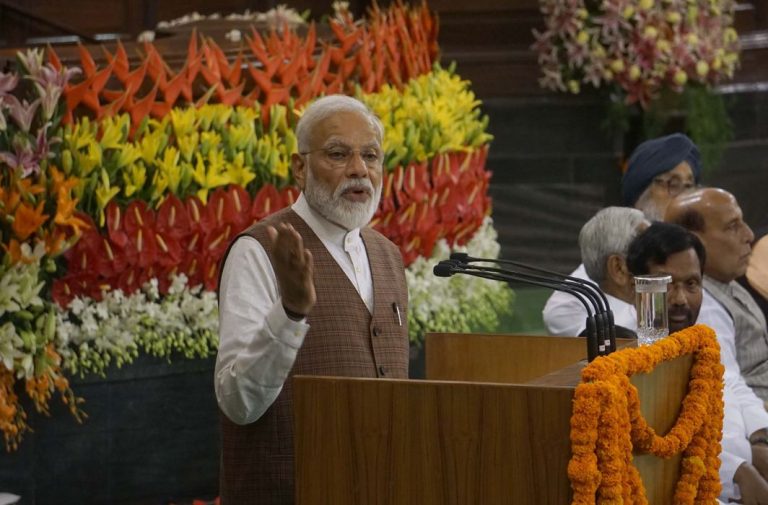 Modi on the Media

What was lost amidst the lofty sentiments and advice given by Prime Minister Narendra Modi during his address last week to over 300 BJP MPs in Parliament’s central hall were his warnings about dealing with the media. Whenever the subject came up, it was clear that he considers the media an obstacle in the path of the government. Despite the fact that a majority of the conventional media was overtly pro-Modi, he warned first-time MPs about the booby traps laid by the media. He said that often, while questioning MPs and politicians, it performs the role of a destabiliser by blowing up remarks or quoting them out of context. His advice to all MPs was to steer clear of controversies and not allow themselves to be “seduced” by media.

His exact words were: “God knows what magic lies in the TV boom that mouths open on their own, and words pour out that keeps their (media’s) business thriving and puts the party in trouble.” He could have been referring to Pragya Singh Thakur’s controversial remarks on Nathuram Godse, or Maneka Gandhi’s statement to those who would not vote for her. Modi’s favourite label for the media was “seductress”. Modi also warned MPs about falling for the “off-the-record” interview ploy. He emphasised that nothing spoken to the media ever remains “off the record”. He also warned about technology and hidden devices that could record private conversations. The message clearly explains why his shunning of the media continues—even during a press conference.

It’s time for the other Doval, National Security Adviser Ajit Doval’s son, Vivek, to come under the spotlight. He is currently at the Patiala House Courts, fighting a defamation case he filed against Congress leader Jairam Ramesh, The Caravan magazine and journalist Kaushal Shroff. The magazine had published an article provocatively titled “The D Companies” which was later quoted in a press conference by Ramesh.

The article says that Vivek’s business is linked inextricably to businesses run by his brother, Shaurya Doval, a BJP politician who heads India Foundation, a think-tank enjoying close proximity to the Modi government. It also pointed out that Vivek runs an offshore hedge fund based out of a tax haven and this is notable in the light of the established public position taken by his father. In 2011, Ajit authored a report that advocated a strict crackdown on tax havens and offshore entities. Vivek, a chartered financial analyst and citizen of the UK who resides in Singapore, is the director of the hedge fund, named GNY Asia Fund.

In his deposition before the court, Vivek said that “what really disturbed me was the title of the article ‘The D Companies’.” He revealed that the article had damaged his professional reputation. He told the court that he was “shocked how random facts, incorrect facts, insinuations, innuendos had been pieced together to give an exceptionally misleading picture about myself and my family,” and mentioned that in India, ‘D Companies’ refers to the Dawood companies, whose protagonist is an international terrorist. The article also mentioned the coincidence between the registration of his hedge fund 13 days after demonetisation—the fund was registered in the Cayman Islands on November 21, 2016. Vivek added that his father has no relationship with any of the companies he set up. The case is ongoing.

It’s become normal practice for governments to unleash their attack dog—the Enforcement Directorate—on media houses that write critically on any aspect of governance. It started with NDTV and the latest is Raghav Bahl, co-founder of the news portal The Quint. The issue, which has been highlighted by one particular business news channel, BTVI, concerns a property Bahl purchased in London. Bahl says that “Every transaction has been fully disclosed and assessed to tax, fully financed through legitimate LRS payments via banking channels, along with permitted mortgage funds overseas.”

What is intriguing about the case is that without having received any summons or notice from the Income Tax Department, two prosecution cases have been registered against Bahl in the court of the Chief Judicial Magistrate in Meerut. These cases were filed and registered on May 3, 2019, and Bahl is still to receive any notification on the cases. He says he did receive a showcause notice which seeks information with regard to a property in London worth £2.73 lakh (Rs 2.45 crore approximately). He says the entire funds invested in that property have been remitted through banking channels under the scheme approved by the Reserve Bank of India.

Bahl’s Quint is a highly credible portal which also has a section that exposes fake news, and being a respected financial journalist, he is often critical of the government’s economic policies.