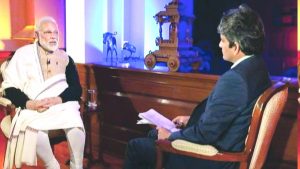 After much criticism of his reluctance to have any press conferences or interviews with the media in the last three years, the Prime Minister finally obliged on the eve of his trip to Davos. The two news channels chosen for the honour are known for attacking all those who oppose any aspect of the government’s functioning—usually dubbing them anti-national. The two channels, Times Now and Zee News, were asked to submit the questions in advance. The questions were like friendly lobs and included some on how he manages to make friends so easily and where he gets his energy from. Both those questions came from Zee News anchor Sudhir Chaudhary, who is more aggressive in his nightly defence of the BJP than many BJP ministers. The only newsworthy point Modi made was to Times Now when he admitted that farmers were in distress and his government had not been able to tackle the issue. Maybe these are the only news channels he watches! 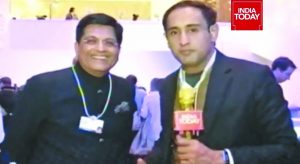 The Indian journos, led by those from TV channels, make a beeline to Davos every year, bundled up in their warmest jackets and thermals, to cover proceedings of the week-long jamboree. Some are regulars, as much as Mukesh Ambani, Sunil Mittal or Anand Mahindra, but here’s the conundrum. They travel all the way to the mountain resort where the rich, famous and powerful from all over the world gather every January, and wind up interviewing only Indians, from corporate leaders to ministers and chief ministers, usually, for atmospheric effect, standing in the freezing cold with snow and ice as a backdrop. The problem is that these are all people they could have easily interviewed back home. Check out the BBC and CNN—they do a range of interviews with people from various countries to get a feel of the global mood. This year, all our channels had interviews in which everyone spoke of what a great speech Narendra Modi made, and how India’s economy was poised for take-off. Expensive sound bites with little value for the intelligent viewer seeking a broader perspective.

The Power of Print 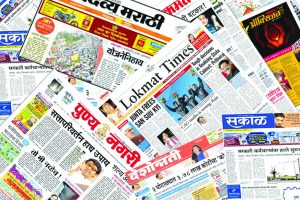 The latest Indian Readership Survey (IRS) 2017 has shown that the Indian media market is bucking the global trend. The survey shows a 9 percent growth in total newspaper readership in the last four years (IRS had stopped its annual survey due to questions over its methodology and only resumed last year). The biggest takeaway is that  the rural market is fuelling growth in print, for both English and Hindi publications—Hindi readership was up 45 percent from IRS 2014. The increase in readership in rural areas is reflective of the rising literacy rates in these regions. Hindi dailies saw a huge spurt in readership–they saw a 45 percent surge in readership to reach 176 million. English dailies saw a 12 percent increase in readership from 25 million in 2014 to 28 million in 2017.

Last year was not a good year for journalism in India According to the annual Freedom Report compiled by the online media site, The Hoot, reporters, photographers and editors faced attacks, threats, and cases filed for defamation, sedition, and even murder! It was a year, says the report, in which two journalists were shot at point blank range and killed, and one was hacked to death as police stood by. The statistics are chilling:

The report says that the climate for journalism in India grew steadily adverse in 2017. Reporters, photographers and editors were attacked, threatened and cases filed against them for defamation, sedition, and internet-related offences. One editor, Gauri Lankesh, was murdered close to her home.