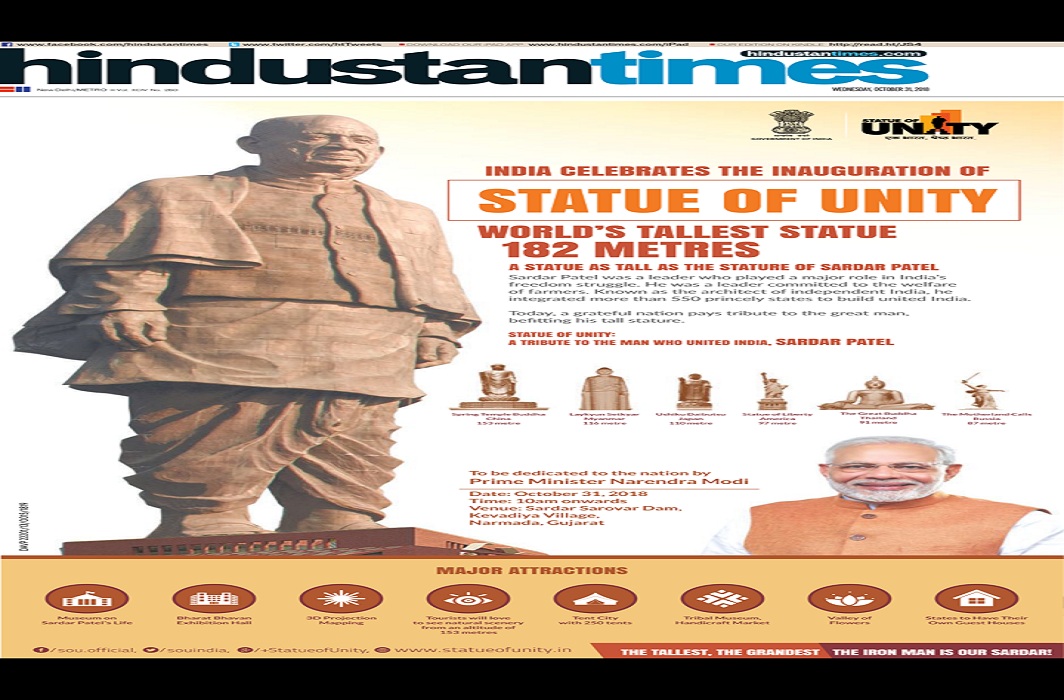 The huge publicity blitz over the approximately Rs 3,000 crore statue of Sardar Patel in Gujarat which was unveiled by the Prime Minister, proved a huge bonus for the print industry as well, in fact a double bonus. Apart from the front-page colour advertisements in all leading dailies, newspapers were also obliged to carry an article by Modi extolling the virtues of India’s first Home Minister. All national newspapers, including The Times Of India, The Indian Express and Hindustan Times (The Hindu had to settle for a similar article by Vice-President Venkaiah Naidu), and selected regional ones, carried the piece prominently, on the op-ed page, with varying headlines. All carried a line at the bottom saying the author/writer was the prime minister of India, except for Hindustan Times which goofed up badly—it has a standard format for contributors to the op-ed page which adds, “Views expressed are personal.” That is like suggesting the paper’s editorial stance may not agree with the writer’s! Considering that it was Modi who got the paper’s owner, Shobhana Bhartia, to sack its former editor, Bobby Ghosh, that was the unkindest cut. An apology will be forthcoming.

The massive marketing exercise by the BJP to project Narendra Modi, at the cost of ignoring others, is reflected in the government arm that is in charge of publicity. The Press Information Bureau, between January 1 and September 23 this year, issued 542 press releases relating to the PM. Releases relating to the high-profile ministry of external affairs added up to just nine over the same period. Which makes minister Sushma Swaraj qualify as the Invisible Woman. A total of 4,067 photographs of the PM were released by the PIB, and over the same period, 42 photographs were released on the foreign ministry, with Swaraj, the external affairs minister, featuring in only four. These statistics are part of a research conducted by the Media Studies Group. The PIB releases videos, but the research shows that not a single video was released on Swaraj or her ministry, over the past two years. Other ministries with a lower profile and importance but greater insights into PIB’s random methodology, fared better.

Congress leader Shashi Tharoor’s new book, The Para­doxical Prime Minister, where he quotes an unnamed RSS leader comparing Modi to a scorpion sitting on a shivling, has snowballed into a major political battle with heated TV debates and BJP leaders and supporters attacking the book and its author. What was missed in the din was that it was not an original quote—Tharoor was quoting from an article in Caravan magazine published in 2012 when Modi was the chief minister of Gujarat. The original article appeared in the magazine’s March 1, 2012 issue and was written by the magazine’s Executive Editor, Vinod K Jose. The quote appears as: “Shortly before I left Gujarat, one RSS leader described his own feelings in a bitter sigh: ‘Shivling mein bichhu baitha hai. Na usko haath se utaar sakte ho, na usko joota maar sakte ho.(A scorpion is sitting on Shivling, the holy phallus of Lord Shiva. It can neither be removed by hand nor slapped with a shoe.)’.” Following the uproar against Tharoor, Jose took to social media and said: “For Modi’s profile I had interviewed 105 people…Then or now, people don’t want to know who the RSS leader was? Instead of looking inward who the RSS guy was, why go for a tertiary source (Tharoor) in this?”