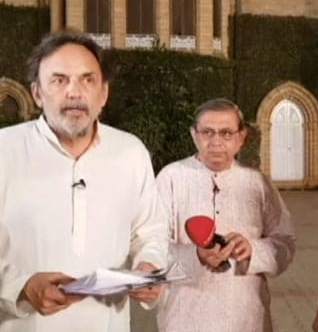 Writing on the Wall

These days, NDTV boss Prannoy Roy, accompanied by election gurus psephologist Dorab Sopariwala (above right) and veteran journalist Shekhar Gupta, is touring the states going for assembly elections. It’s a familiar sight whenever key elections are due but now Roy plans to take it a step further. As a prelude to the 2019 Lok Sabha polls, he is currently hard at work on a book commissioned by Penguin and co-auhored by Sopariwala, in which they will attempt to demystify Indian elections and electoral politics. The book, due to be out in February-March 2019, will be based on psephology, original research and some exclusive material uncovered in their travels. It will have a special chapter on the issues, key players and prospects of the 2019 elections. In a statement, Roy says: “There’s nothing more exciting than Indian elections. We look at what they mean to everybody, how they are different and what the underlying trends and forces are that determine the outcome.” The publishers, Penguin Random House India, see this as one of their landmark releases in 2019. The book, as yet untitled, will go as far back as 1952, India’s first general election, to track trends and voting patterns.  In a typically self-effacing tweet, Roy said: “I have never worked harder in my life.”  With his background, experience and knowledge regarding elections (his channel’s tagline is “The Channel for Elections”), it should be a collector’s item.

No other city has more English newspapers than Delhi. Last week, The Morning Standard, a newspaper from the Chennai-based New Indian Express Group, was launched by former president Pranab Mukherjee. Under the agreement when Ramnath Goenka’s Indian Express was split territorially between adopted son Viveck Goenka and daughter-in-law Saroj Goenka, The Indian Express would distribute in north India, while Saroj Goenka’s New Indian Express would operate in the south. The Morning Standard and The Sunday Standard were two defunct papers which were revived with the intention of gaining a foothold in the north, without violating the agreement. At the launch, it was clear that the paper did not want to be a mass market player, and it shows—the design is amateurish, with a three-line logo, and the lead page is followed by a two-page Leisure section, which is even more odd. The staff is clearly skeletal, local reporters get multiple bylines and lead items are sent from Chennai, so it appears that there is some other reason behind the launch. Sources say that when the original pact was signed, web and online content were not even thought of. The idea seems to be to establish New Indian Express’s online presence in the north, and that is where the focus will be for editorial director Prabhu Chawla and resident editor Khogen Singh. Already, social media is seeing a lot of activity with the news content branded as #NewIndianExpress and #MorningStandard both.

It seems no coincidence that exactly a day after The Morning Standard was launched, Delhi-based The Indian Express redesigned its daily newspaper and heavily reinforced and reworked its online content. The paper now sports an Explained sidebar on major stories, like a mini editorial, but the main tweaking affects the online division—clearly the paper’s owners and editors had some insight into the reasons behind the launch of The Morning Standard. There seem to be heavy investments in the online sections, with extra photography, lengthier video content, and more variety in the Opinion section. The paper claims that it will carry fewer ads and the navigation system has undergone an overhaul. On the front page of the new look paper, there was a long sidebar addressed to “Dear Reader” which explained the changes and why they were necessary. There was, obviously, no mention of its rival, but clearly this had been in the works for some time so it had advance knowledge of The Morning Standard ploy. The fact that Khogen Singh was appointed editor in Delhi more than a year ago, would have offered some clue.