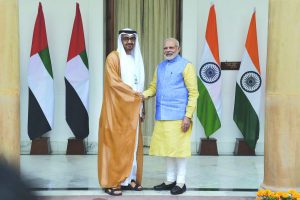 India and the External Affairs Ministry are hugely embarrassed thanks to over-enthusiastic anchors from Times Now and Zee TV who gleefully aired a video the day Prime Minister Modi arrived in the UAE claiming that Crown Prince of Abu Dhabi Shaikh Mohammed Bin Zayed Al Nayhan had chanted “Jai Shri Ram” during an event connected to Modi’s visit. The man in the video, shot two years earlier, is not the Crown Prince but a local Arab journalist speaking at an event for NRIs.

It was left to the English daily, Gulf News, to point out the gaffe in a scathing report which said that Indian media groups were incapable of “responsible journalism”. The report also pointed out that the Crown Prince was Chief Guest for India’s Republic Day parade in 2017, an event covered extensively by the same two channels, adding: “The pattern of a known fake and out-of-context video being deliberately re-circulated multiple times by a selected section of the Indian media is a clear pointer that the objective of the exercise is to spread malicious and false propaganda.”

The UAE Embassy in New Delhi did not issue a statement but its official handle on Twitter shared the Gulf News report, leading to many red faces in South Block. 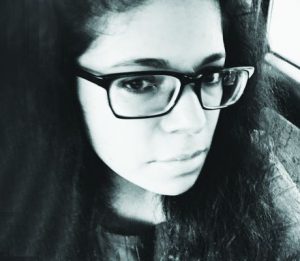 The India Today Group has shot itself in the foot—by shooting the messenger. Last week, it terminated the contract of the political editor of its opinion platform, DailyO, Angshukanta Chakraborty, when she refused to delete a tweet from her personal account. The Tweet was a comment on media ethics but seemed to be critical of her employers. “Promoters turning a blind eye to hate-mongering, fake news spreading anchors, editors and reporters and writers, or hiring them in the first place, must be tried in courts as hate speech enablers-profiteers.” Recently, an anchor from India Today’s Hindi channel, had been called out on social media for inflammatory, tendentious reports on Kasganj. Then the editor of Mail Today had added his own communally charged fake news. No action was taken against them but Chakraborty was asked to delete her tweet. When she refused, her contract was terminated. She has now put out a tweet addressed to her ex-employers. “This is to give you notice that I will take such action against you as advised to vindicate my fundamental right to free speech and expression and my integrity as a journalist.” 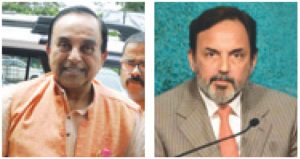 In an unusual gesture, NDTV founder Prannoy Roy has been forced to write a letter to the Prime Minister regarding Subramanian Swamy’s attacks on the channel. The letter says: “I write to you in the context of the barrage of letters about NDTV addressed to you (and simultaneously released to the press/social media) by Mr Subramanian Swamy. While his letters are a litany of falsehoods—aimed at muzzling and silencing NDTV with an underlying warning to all free and independent media in India—what is equally important is the damage to India that Mr Swamy and his loyalists are inflicting.

“I feel it is my duty to bring this to your attention. Mr Swamy, through various unethical and dubious methods has ensured that the finest US corporations—GE and NBC (America’s most-respected media organisation)—are being accused of ‘money laundering’ and indulging in ‘sham transactions’ with NDTV. These outrageous accusations are being made by India’s Enforcement Directorate and Income Tax department…..

“I have met both Mr Immelt and Mr Zucker on several occasions when their organisations invested in NDTV. Mr Prime Minister, you too have met Mr Immelt a number of times after you became PM. You will agree with me that these are industry leaders full of integrity and vision. For the ED and the IT department (where the officers are under relentless pressure from Mr Swamy and his cohorts), to accuse these two leaders of being involved in money-laundering with NDTV is a shame on our nation.”