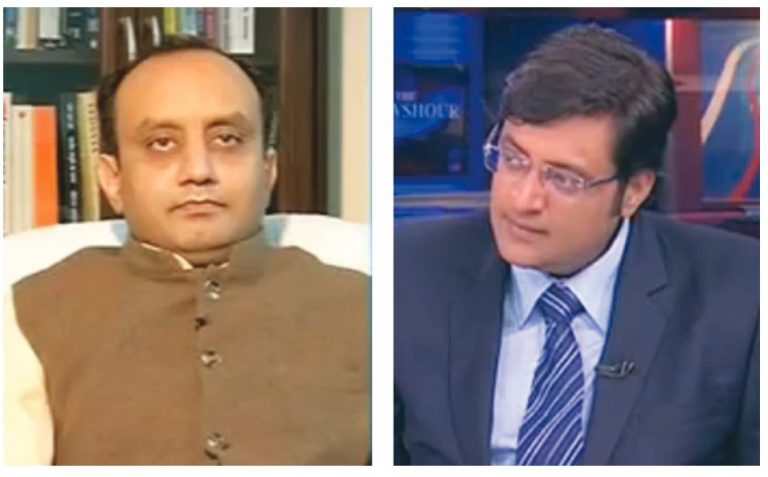 Is there something about the outcome of the 2019 Lok Sabha polls that Republic TV’s Arnab Goswami knows that no one else has an inkling of? There is no denying that as far as the BJP’s cheerleaders in the media are concerned, Goswami tops the list—hosting his deafening, venom-spewing panel discussions each day to lampoon the Opposition and sing paeans to Narendra Modi and his regime.

But, on January 7, something in the bumptious Goswami seemed to have snapped. The celebrity anchor hosted a panel discussion titled #JhootPolitics that stunned his critics and fans alike. The discussion saw Goswami thundering in his characteristic monologue against (now hold your breath!!) BJP spokesperson Sudhanshu Trivedi, declaring that the BJP’s politics was all about selling lies to the people.

The many accusations, some even factually correct—possibly another first for Goswami—that the channel’s editor-in-chief made against the saffron party, included the slew of custodial deaths in prisons across Uttar Pradesh ever since Yogi Adityanath became the chief minister and, believe it or not, “peddling the lie” that the party will have a “magnificent Sri Ram Mandir” built in Ayodhya.

As a visibly shaken Trivedi stuttered and stammered, Goswami continued reading out the long list of “lies regularly spread by the BJP and its IT cell”. His performance instantly triggered a Twitter storm with many expressing their disbelief at what they were witnessing.

With even the highest echelons of the Narendra Modi government struggling to find a plausible defence of the controversial Rafale deal, the state of BJP spokespersons trying to do the same on television debates has begun to leave viewers more amused than angry.

The latest in the series of bumbling rebuttals from BJP spokes­persons against the Congress-led Opposition’s charges on the Rafale deal, and the consequent mess it has left Hindustan Aeronautics Limited’s (HAL) finances in, came from Shahnawaz Hussain during a television debate on Aaj Tak channel.

Hussain was asked to respond to charges that the fiscal health of HAL—supposed to be Dassault Aviation’s original offset partner in the Rafale deal before Anil Ambani’s Reliance Defence gate-crashed the party—had become worrisome under the current regime.

The channel’s anchor, Nishant Chaturvedi, quoted HAL boss R Madhavan as having said that the PSU’s “cash-in-hand is negative” and that it has been forced to draw an overdraft of “Rs 1,000 crore” to pay salaries. Hussain’s mind-boggling reply was that the country was moving towards a “cashless economy” and so HAL should not be seeking cash-in-hand!

Flummoxed, Chaturvedi said that he was trying to have a “serious debate” but Hussain’s lack of knowledge of the accounting term, cash-in-hand, was apparent when he replied: “Yes, this is a serious discussion and I want to know why they need cash in hand…we have a cashless economy now, there is no need for cash in hand.”

The Indian cricket team’s historic and emphatic Test match victory Down Under was a cause of celebration not only in this country but also in neighbouring Pakistan—India’s arch rival in the gentleman’s game and in geopolitics. Much of the applause came on social media, but the appreciation that caught the most attention, and drew affectionate praise in Bharat came from ace cricketer tur­ned politician Prime Minister Imran Khan. He tweeted: “@ImranKhanPTI Congratulations to Virat Kohli and the Indian cricket team for the first ever win by a subcontinent team in a test series in Australia.”

Geologist Arshu Khosla is at the receiving end of online bashing since his recent assertion that the extinct dinosaur was discovered by the Hindu god, Lord Brahma. Khosla is an associate professor at Panjab University. He declared that, according to the Vedas, Brahma had early familiarity with this ancient creature.

Speaking at the Indian Science Congress (ISC), Khosla asserted that etymologically “dinosaur” had a Sanskrit lineage: “…‘dino’ means terrible, it translates to ‘daayan’ (witch) and ‘saur’, which otherwise means lizard, is related to ‘asur’ (demons)….”

According to a prominent newspaper, the Indian scientific community distanced itself from these assertions. Indian social media users were alternately amused and concerned by this and other similar statements issued at the ISC. Some of the prominent statements that caused outcry included an attempt to discredit Einstein’s Theory of Relativity by physicist Kannan Krishnan and another attempt to rename gravitational waves as ‘Modi waves’”.

Andhra University Vice Chancellor G Nageswara Rao, at the same event, claimed that the Kauravas were early examples of test-tube babies and the products of stem cell research in India. Netizen Tweep @Neurophysik posted: “Okay, even if I believe 100 Kauravas were fertilised as eggs in earthen pots (‘test tubes’), did Gandhari [the mother of the Kauravas] not go through a post-fertilisation gestation for 100 babies? Or did that happen through artificial wombs, too?”

@debasishborah tweeted: “Oh no. What a shame! It seems the Indian Science Congress has made it a tradition to have at least one talk/event which makes us a laughing stock of the world!” News outlets like the BBC and The Guardian had a blast reporting the public outcry against what one critic dubbed the ISC, “The Indian Superstition Congress.”

Did the maverick, outspoken Hyderabad MP, Asaduddin Owaisi, write a letter to the UN saying Muslims are not safe in Hindustan, and the UN replied, “Please go wherever you are safe”? This message along with a picture of AIMIM chief  Owaisi has been posted by a Facebook page, Acche Din. It was shared a few days ago over 16,000 times. “The page Acche Din has a following of over 13 million. The message has also been shared by individual users on Facebook. It also found its way to Twitter,” reports watchdog portal Alt News.

In conversation with Alt News, Owaisi said: “This is an absolute lie. It is the work of trolls. You may refer to my response to (SP leader) Azam Khan over the Dadri issue, when I had raised objection over him taking the issue to the United Nations. I have recently criticised (Pakistan PM) Imran Khan over his statement on minorities in India. There is no question of my having written such a letter to the UN.”

Alt News found that in 2015, Owaisi had lashed out at SP leader Azam Khan after the latter had written a letter to the then UN Secretary General, Ban Ki Moon, seeking UN intervention after the Dadri lynching episode in which Mohammad Akhlaq was killed on suspicion of having consumed beef. Owaisi had reportedly said: “Azam has committed a blunder by taking up India’s internal issue with the UN. It is supposed to be solved within the country.”