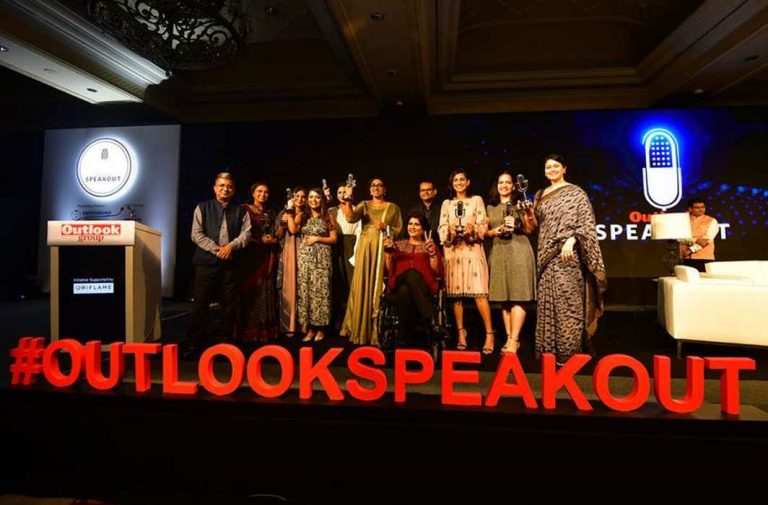 These days, media houses are piggybacking on events as revenue spinners, regardless of the theme. In that sense, Outlook has done a sterling job by launching an annual event called “Outlook Speakout” two years ago. The focus is entirely on women who deserve recognition and the event gives them an opportunity to speak out in areas of their accomplishments and activism.

This year’s line-up, like earlier, was quite eclectic and showcased women fighting odds and male privilege to raise issues pertinent to women—and children. One of the awardees was a nine-year-old girl from Manipur, Elangbam Valentina Devi, known as Manipur’s green ambassador, who fights for climate change a la Greta Thunberg.

The evening honoured 25 women, including Dr Priyanjali Datta, founder of Aaroogya, who goes door-to-door with her team to educate rural women on how to self-examine for breast cancer. There was also Shehi Shafi, a Dubai-based artist who uses her creative expression to mobilise social change. Jagi Mangat Panda has been largely overshadowed by her politician husband, but she is a hugely successful entrepreneur as managing director of Ortel Communications, a broadcast and broadband company that she built from scratch. Deepa Malik has transcended her disability to become the first Indian woman to win a medal in the Paralympic Games.

There was also a glamour quotient with Shefali Shah, who featured in the Netflix original, Delhi Crimes, based on the Nirbhaya case, Kirti Kulhari, famous for her role in Pink, and Kubbra Sait, who quit her corporate career in Dubai to play the character of a transgender in the popular web series, Sacred Games. It was an evening to celebrate women’s empowerment.

For the first time, news broadcasters are actually offering their subscribers a Diwali discount. It is a sign of the downturn in the economy, but most major broadcasters, including Sony Networks, Star TV, Zee and Viacom 18 have reduced the a la carte prices of some of their channels by nearly 37 percent to customers. The basic idea is to bring in long-term gains but the move will lead to a hefty loss in subscription revenue. Experts estimate the revenue loss could be close to Rs 250 crore.

This comes just when the Telecom Regulatory Authority of India has announced that it will review the current tariff order, and most broadcasters have gone ahead and dropped the subscription prices. What it also means is that the subscription model based on the a la carte model is under review. Broadcasters are already facing a loss of ad revenue and many channels still have unsold ad inventory. The price drops as part of festival deals is seen as a desperate measure to try and increase the secondary source of income—subscriptions.

Today’s television news is like a vast echo chamber with every anchor (minus some rare and brave exceptions) acting like government spokespersons—forget credibility and logic. Nothing illustrated this better than the debate on the possible Ayodhya verdict. Despite the News Broadcasting Standards Authority’s advisory that news channels should not speculate on the verdict or show bias, most channels ignored it and blatantly took sides.

Aaj Tak’s anchor proudly declared: “Birthplace ours, Ram ours, where have these mosque people emerged from?” News 18’s Amish Devgan was equally one-sided: “A few days of waiting (the verdict is expected on November 17) followed by good news?” Rubika Liyaquat of ABP News went a step further by walking prime-time viewers through a model of the Ram temple that was going to be built on the site. This was an issue made for Republic TV’s Arnab Goswami who launched an unprovoked attack on Rajeev Dhavan, the lawyer for the Sunni Waqf Board, and declared he was going to “expose” him.

Where Republic TV is, Times Now can’t be far behind, and we had Rahul Shivshankar declaring that it was “time to separate facts from rhetoric”. If only they would.