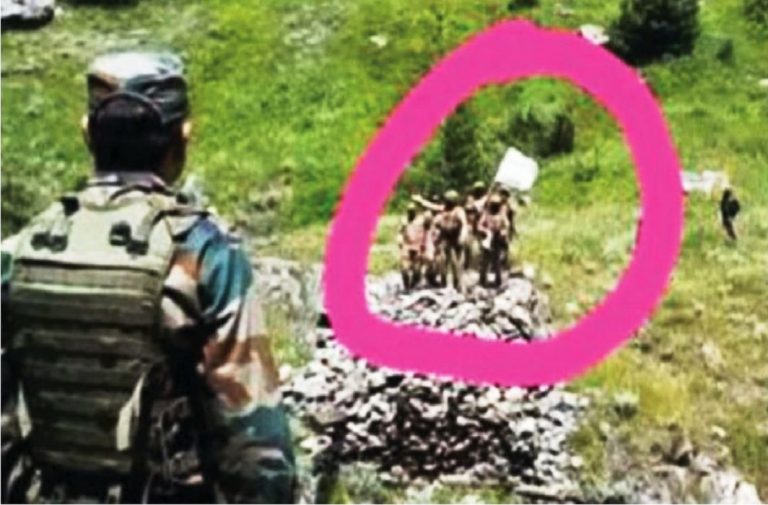 Inevitably, the dramatic developments involving Jammu and Kashmir have given rise to a flood of rumours and fake news on social media, fuelled by BJP/RSS-inspired nationalism and chest-thumping. The most bizarre of these is a Facebook post by one Rajdeep Roy who posted a photo purportedly of Pakistani Rangers waving a white flag while Indian soldiers look on.

Roy’s post says the photo is of Pakistan army personnel and his caption claims they are seeking surrender after the latest government move on Jammu and Kashmir. He goes on to praise Prime Minister Narendra Modi and Home Minister Amit Shah, crediting them with having scared Pakistan army regulars into seeking a truce.

The post garnered a huge number of likes on Facebook till a website devoted to exposing fake news revealed that the photo was actually shot last month when Indian soldiers handed over the body of a seven-year-old boy who was swept away in a river from Pakistan-occupied Kashmir and washed ashore on the Indian side in the Gurez valley. The photo shows the formal exchange process with the Pakistani army during which a white flag is raised to denote a temporary ceasefire.

Social media is creating new monsters every day as right-wing supporters discover its power as a propaganda platform.

There’s a vacancy at Rashtrapati Bhavan for the post of Press Secretary to the President, recently vacated by pro-BJP journalist Ashok Malik. He completed his two-year term as the first person from outside the civil services to be appointed to the post. As of now, there is no news of his replacement and Malik has returned to his earlier avatar, at the Observer Research Foundation.

However, the Lutyens buzz is that he is likely to join the government, probably in a top position in the BJP’s social media set-up. The current head, Amit Malviya, is a close friend of Malik.

Taking Trust to the Bank

Frequently voted the Most Trusted Media brand, NDTV seems to have turned a crucial corner. After years of losses, for the first time in its history, NDTV’s television business (NDTV Limited) has recorded five consecutive profitable quarters, which includes its best quarter in six years, recording a profit of Rs 15.2 crore; the company’s television business has earned a profit of Rs 9 crore. At the group level, this translates into a turnaround of Rs 25.3 crore for the television business, an improvement of Rs 8.4 crore over the same time last year. This is also partly to do with a persistent focus on reducing operating costs, a process the media company began some three years ago. Meanwhile, NDTV Convergence, the online section of the company, has recorded its highest-ever revenue in the last quarter.

Whether in television news or print, female journalists seem to be the most visible or widely read, which is why it is a bit of a surprise to see the latest report by the UN titled “Gender Inequality in Indian Media”, which says that female journalists “continue to be denied their fair share” at major media organisations in India.

The report found that women were better represented online than in newspapers and TV. While 26.3 percent of top jobs were held by women at online portals, TV channels employed 20.9 percent and magazines 13.6 percent of women in leadership positions—defined as someone designated as editor-in-chief, managing editor, executive editor, bureau chief, or input/output editor. The report, which sampled 13 Indian newspapers, Hindi and English, found that only one had a female boss.

The newspapers were selected on the basis of their position in the Indian Readership Survey 2018. The report concludes: “The media today is largely male-dominated in India and across the world. Women are often assigned to cover ‘soft beats’ such as lifestyle and fashion while men predominate in the ‘hard beats’ of politics, economy and sports…. Men also occupy the majority of leadership positions.” Digital media was the only exception where women comprise over 35 percent of the writers who received bylines.