Not only did the British establish the framework for the modern Indian judicial system, but they were also instrumental in the creation of myth that dispute, resolution and justice requires black coats and gowns and elaborate arguments, Chief Justice of India NV Ramana said. 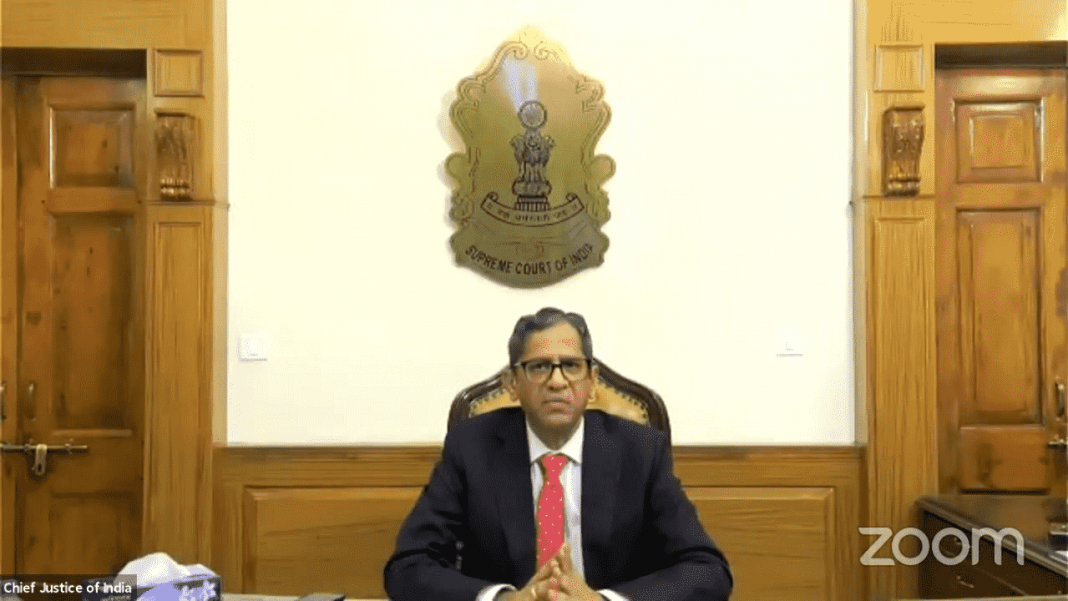 New Delhi, Jul 23 (ILNS) Mediation was a practice that was commonly followed in India prior to the arrival of the British, and their Court system. Not only did the British establish the framework for the modern Indian judicial system, but they were also instrumental in the creation of myth that dispute resolution, and justice requires black coats and gowns and elaborate arguments, Chief Justice of India NV Ramana said.

Speaking at the inauguration of the eight-day International Virtual Mediation Summer School, 2021 organised by Nivaaran-Mediators of Supreme Court of India on Thursday, the Chief Justice said mediation is one of the most important conflict resolution mechanisms currently, which will only continue to grow in relevance in the coming future.

“It is time to dispel the myths and notions that justice requires black coats and gowns and elaborate arguments. The reality is that most of the litigants in India suffer from many social and economic constraints. What they need is a quick, inexpensive and convenient method of dispute resolution. Mediation is one such mechanism available to parties to a dispute.

Apart from the fact that it is cost-effective, time saving and convenient to parties, there is another facet of mediation that marks it out as perhaps a better alternative for parties. Traditional litigation often leaves one of the parties to the proceedings dissatisfied with the result, which is why parties sometimes appeal decisions all the way to the Supreme Court. This often compounds the problem of judicial delays. This is an outcome of the “winner-takes-all” attitude that has come to affect the system, said Justice Ramana.

The CJI emphasized the role of training It must also be remembered, being a successful lawyer does not guarantee similar success in mediation. These two distinct roles require distinct characteristics. A mediator needs to be perceptive to the emotions of both the parties, as well as the underlying issues. Even, with the most stubborn parties, the mediator must guide parties with great optimism and patience to find a workable settlement. Mediation, as a tool of grievance redressal which is cheaper, faster and simpler, can ensure just and fair outcomes, he said.

Mediation signifies a shift from an adversarial attitude or position and creates an atmosphere that focusses on better outcomes for all parties. It enables parties to contemplate a continued relationship after the end of the resolution process.

Apart from this, the Supreme Court Mediation and Conciliation Project Committee, which was set up in 2005, has been integral when it comes to the training of Mediators in India. The first batch of mediators was trained nearly a decade ago and a fresh batch was trained in May 2019

Addressing the law students who participated in the 10 day Summer School for the training of skills of Mediation, the CJI said, I believe that education is one of the most important tools to not only empower people, but to effect change in the society. To this extent, organizing an event such as the present one where eminent mediators, lawyers, judges and jurists have the opportunity to speak their thoughts on various topics and impart information and knowledge to foster new understanding among students and practitioners is invaluable.

The future belongs to mediation. Law students and young lawyers need to learn the requisite skills and be at the forefront of creating the space for the establishment of Mediation, and Mediators, as a separate profession. The Court system needs full time, qualified mediators with necessary skills to convince parties to arrive at an amicable settlement.

The role of law schools and law school curriculum should also not be underplayed. While the Bar Council of India mandates a course on Alternate Dispute Resolution, more focus should be placed by law schools in the country on clinical education, with a focus on Mediation.

Justice Ramana said, I had flagged some issues during the India-Singapore Mediation Summit regarding the difficulties that mediators face during conflict resolution. The first issue related to the role of a Mediator- which is now shifting to a more active, engaged role as opposed to the facilitative role which was earlier envisaged, and how a Mediator must act in such situations. The second, relates to what a Mediator must do, or how “neutral” a Mediator must be, in the face of a patently unjust settlement reached between parties in unequal bargaining positions.

Such issues require a Mediator to be well trained and equipped to understand and be prepared to react to any situation that arises before him. This can only happen if there is a well-designed training programme for Mediators in place with a focus on situation recognition and the appropriate response. The Supreme Court Mediation and Project
Committee has already created a model Training Programme wherein 40 hours of training and participation and successful completion of a certain number of mediation is mandated for accreditation as a qualified mediator.

However, it is necessary for the training programme to be constantly updated and modified, to keep up with the best practices in the rest of the world. We should also be innovative and think of how new technologies, The CJI said.

The 8 Day Summer School will have eminent speakers and trainers including District Judges Sudhir Jain, Sunil Aggarwal and Eminent lawyers from, Delhi, Chennai, Bangalore and other places.