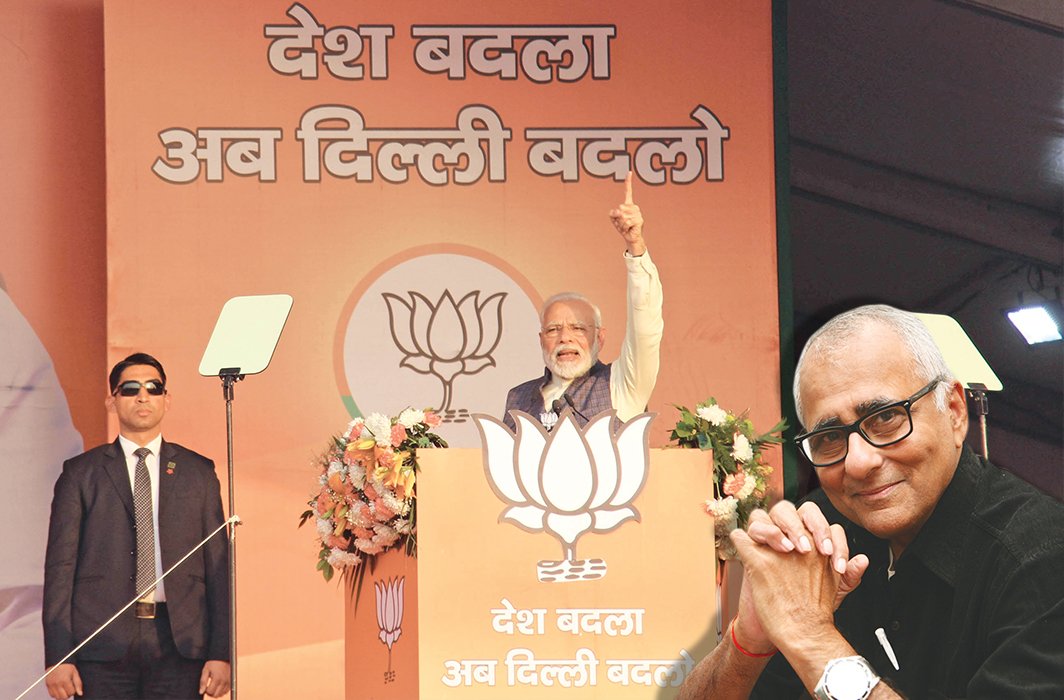 Since most of the national press has virtually stopped playing the role of critical watchdog, and the mainstream parties have been rendered politically impotent in mounting credible campaigns against misgovernance and malfeasance, the return to power of the Aam Aadmi Party under the leadership of Chief Minister Arvind Kejriwal in the February 2020 Delhi elections is a momentous event. It demonstrates that a leader who is perceived by the public as being the most capable of taking on the responsibility of ushering in reform, restoration and revival can still knock the living daylights out of a Goliathan political opponent in Indian politics.

Event management, the donning of fancy headgear, provocative, blood-thirsty harangues instigating majoritarian violence have often combined successfully to cast their spells. But how long can you keep a country beleaguered with crises and setbacks mesmerised by bread-and-circuses routines? For those who insist that Delhi does not represent the realities of the rest of India, I would simply respond that this megalopolis with a population about that of Sri Lanka or Australia or Canada or Belgium is possibly India’s most multi-lingual, multi-ethnic, multi-cultural, multi-religious, multicuisined, multi-caste pan-Indian habitat: A microcosm. Its elected chief minister may not have the same powers as that of a full state, but he or she still represents the people not just of a state but of India.

Post-independence India’s history is replete with examples of the political chickens coming home to roost at both the state and national levels. And Prime Minister Narendra Modi, more than most politicians, must surely be aware of this historical certitude. One major takeaway from this election which Modi’s own die-hard supporters admit is that at the national level, during his first term, he over-promised and under-delivered. Most of the welfare schemes he promised remained stuffed as paperwork in bureaucratic drawers and cabinets as the promotion of cultural nationalism took pride of place over rapid economic development and poverty alleviation.

Still, his supporters, and those whom he drew towards his political bosom through charisma, polarisation, electoral arithmetic and his largerthan-life all-India presence, appeared to believe that no other leader was more capable of solving India’s problems as decisively as Modi and therefore, in the 2019 general election, he must be given a second chance lest a hodge-podge alliance come into power and make things worse than they already are.

And herein lay Modi’s challenge and opportunity. In the months following his spectacular victory at the national hustings, would he ensure that things got better during his second coming or would he let matters slip, much to the disappointment of his supporters, among them the severest critics of his non-performance who still voted for him? The latter was a combination of those who really believed he would be a better leader than anybody in the Opposition, as well as those who believe that nationalism requires all other issues to be sacrificed at the altar of Hindu majoritarianism.

It was heartening to hear Modi, during his first post-election speech, swear his allegiance to the primacy of the Constitution. He raised the hope that after the heat and dust of communal campaigning and anti-minority dog whistles, this signalled a continuing adherence to the founding fathers’ vision of a multi-cultural, multi-religious nation. Was Modi, after his national electoral victory, also signalling a renewed commitment to help restore the credibility of institutions like the CBI, the Election Commission, the RBI, the CAG, as well as non-interference in the Judiciary? Would he stand by his commitment to disengage with those who had raised Nathuram Godse, the assassin of the Father of the Nation, to an iconic figure of worship?

In the past, the affairs of this nation have im – proved only when the leadership has publicly acknowledged and enunciated the issues. Nobody’s purpose is served by running away from them or arm-twisting government agencies to juggle statistics. The challenges were daunting. Modi’s economic advisers admitted that the nation may be slipping into a situation where middle class purchasing power, which stimulates the economy, had flattened out. The liquidity crunch and palpable economic slowdown because of de – mo netisation and uncertain indirect tax policies showed no signs of abatement. Rising unemployment, reverse migration and severe under-employment were breaking the backs of the rural poor. SMSEs and the unorganised sector stood reeling under the weight of increased petroleum prices which could damage India’s entire economic infrastructure in the face of the impending Iranian oil crisis caused by the US-Iran standoff.

The faith of the public in the banking system was eroding because of financial strains, the drying up of rural credit and the scandalous rise of NPAs. New investment in the manufacturing sector was at a standstill. Ease of doing business remained a slogan. Pledges to protect the environment and clean up our rivers remained hollow. There was total confusion on the issue of reservations across the board ever since the announcement of 10 percent quota for upper castes.

It was not as if the public was unaware of these problems. Nor did it ignore them. You don’t need the Opposition or the Congress party to tell a hungry, suicidal peasant that he needs a solid meal. The truth is that the voters believed that Modi would be better equipped and capable of solving these problems than any other leader competing with him. So they re-elected him. They put the burden back on his shoulders. And this needed solid performance. Not event management. Not long budget speeches without a long-term recovery plan.

Modi’s first five years were a trailer—a preview of attractive promises to be kept after the actual show begins. In that sense, the prime minister’s second term was the beginning of the real movie and, as the voting percentages and voter turn-outs indicated, it was housefull. There could be no more excuses now. Grave policy and administrative lapses would no longer meet with benevolent acceptance on the ground that a first-time prime minister with little experience of running anything larger than the state of Gujarat should at least be given a second chance in case, despite his best intentions, he goofs up.

But as the 2020 Delhi elections have shown, the cinema halls are emptying out at interval time. Housefulls can empty out pretty fast if the feature presentation doesn’t match the trailer. Remember, India is the biggest film-going nation in the world. All dishum-dishum and no credible plot or story make for a box-office disaster.