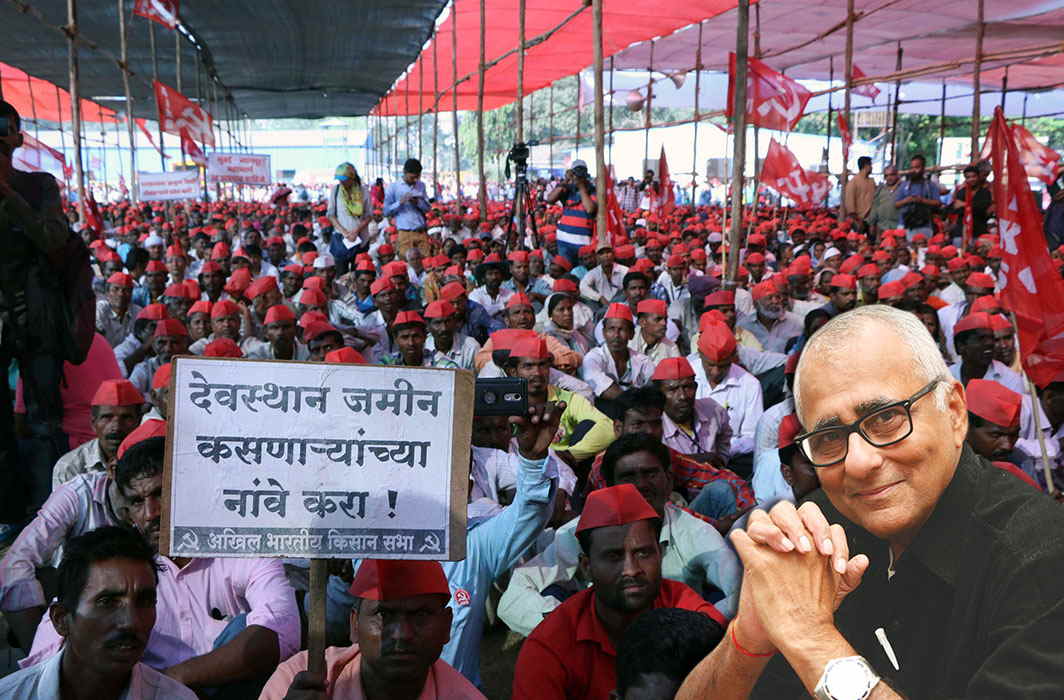 On June 1, 2018, a day after the BJP received a political drubbing in the bypolls across India, The Indian Express carried two headlines on its first page: “Opposition Parties Take 11 of 14 Assembly and Lok Sabha Seats.” Side by side, it ran a feel-good headline for the ruling party: “Good Rabi Crop, Uptick in Factory Output Lift GDP up to 7.7 Per Cent.”

Does it make any sense? The economy growing at about the fastest rate in the world, while the government receives a simultaneous thrashing at the hands of voters in what could be a prelude to the 2019 general elections? In Kairana, UP, which had become the riot-torn crucible for vote-catching Hindu-Muslim politics following bloody communal clashes and a religion-based exodus of population that swept the BJP and its majoritarian sabre-rattlers into power, “Jats and Muslims stepped over riot faultlines to vote together”, the Express said.

Actually, this is an  example of why statistics should be damned, and political parties should be careful of using “surging” GDP and related feel-good econometrics of the kind regurgitated by the likes of Surjit Bhalla as vote-catching electoral propaganda. It just doesn’t work.

When a voter is unemployed, his pockets empty, jobs shrinking, diesel and petrol prices skyrocketing, mandis in distress, prices soaring, GST raising the cost of anything you touch, markets shrinking, uncountable jobs sacrificed at the altar of economic adventurism like demonetisation which failed to distinguish between a “black economy” and a cash-based economy, he’s going to punch you right in the nose when you tell him you stand for the farmer and the working man.

Prof Arun Kumar bemoans the fact that “political parties are now bereft of ideology or principles—the aim is to get to power to serve the vested interests who fund them”.

He will see though this and dismiss your statistical grandstanding as b…s…. Columnist and editor Dilip Bobb is no economist. But in a  satire piece he wrote for this magazine over a year ago, he observed: “Jaitley and Economy: He is finance minister, so Arun Jaitley and the economy would have a valid connection but the twin strikes of demonetisation and GST have put him in the dock and the former legal eagle now resembles a lame duck. ‘It’s the economy stupid’ is a phrase that could haunt him forever.” Bingo! This was many, many months before the unprecedented march of nearly one lakh farmers from all parts of rural Maharashtra to Mumbai to demonstrate their growing economic misery. Couldn’t the government sense a massive crisis was at hand and address that head-on instead of talking bullet trains and sea planes and “collusion with Pakistan”?

According to Sujan Hajra, chief economist at Anand Rathi, a financial analysis firm, India has one of the world’s highest food spoilage rates; one of the world’s lowest per capita productivities and farmer incomes; poor rural roads affecting timely supply of inputs and transfer of outputs; inadequate irrigation systems; poor seed quality and inefficient farming practices and harvest spoilage causing over 30 percent of wastage; lack of organised retail and competing buyers.

Maharashtra’s brother farmers in UP had similar grievances about returns on investment, loans they couldn’t pay back, inadequate support prices, unrequited money from the sales of their cane, suicides, their kids dying in hospitals because of lack of oxygen… but their Executive Yogi was off in Karnataka preaching Hinduism-in-danger and down-with-Jinnah-portraits.

Glib national TV commentators and their talk show guests have suddenly awoken to what they called “farmers’ issues” as being important to the elections. The wisdom of morons! Like the economy, it IS the farmers. Stupid! Their “distress” is the country’s distress—yours and mine. These folks are not just another wrapped item in your shopping basket of goodies. They ARE the issue, and they are the force that combined under common banners cutting across caste and religious divides in the recent bypolls to give the ruling party the middle finger.

Farmers are part of India’s large unorganised sector. (There is abysmally low productivity in the farm quarter—50 percent workforce and just 16 percent GDP.) As Prof Arun Kumar, one of India’s best known international economists, notes, this (total unorganised sector) is 93 percent of total employment and 45 percent of total output. Data for this sector is not available in the routine because it is dispersed across the length and breadth of the country in tens of millions of small and cottage units which do not report their data to any agency. The largest component of the unorganised sector is agriculture constituting 45 percent of the workforce and 14 percent of the total output of the economy. Data for agriculture is collected for each of the growing seasons and becomes available with a short time lag, but it is not collected for each quarter.

The non-agriculture part of the unorganised sector constitutes 48 percent of the workforce and 31 percent  of the total output. It is the data for this part that is not available for some years, Prof Kumar explains.

And here comes the rub. The gloating GDP figures (I quoted the latest at the beginning of this essay) are misleading. They cannot reflect ground reality or sentiment. The government carries out surveys periodically for each component of the unorganised sector like trade, manufacturing and finance. Thus, this data is not available either for each quarter or for each year.

Says Prof Kumar: “For the period after Novem­ber 8, 2016, due to the two shocks—demonetisation and GST—the ratio calculated earlier was no longer valid. Fresh surveys were required to capture the impact. Since no surveys were carried out either post November 8, 2016, nor after July 1, 2017, one can safely argue that the data used for quarterly growth of the economy is not capturing the shock experienced by the unorganised sector. A rough calculation based on scattered evidence suggests that the current rate of growth of the economy is less than 1 percent and not 6.3 percent.

Farmers are part of India’s large unorganised sector. There is abysmally low productivity in the farm quarter—50 percent workforce and just 16 percent GDP.

Almost immediately after Prime Minister Modi announced the demonetisation of Rs 500 and Rs 1,000 notes on November 8, 2016, I carried an exclusive interview with Prof Arun Kumar, the noted author and international economist who is considered one of the world’s leading authorities on the impact and generation of black money. Kumar predicted that not only was demonetisation the wrong way of tackling tax evasion and recovering wealth, but also that the move would have adverse political consequences for Modi because the poor would be the worst sufferers. He called it a “foolish” step. The India Legal story went viral. It also generated a chorus of trolls against critics of the Modi initiative who were labeled as supporters of tax evaders and money launderers.

Immediate political results of the psychodrama seemed to favour Modi, specially in the Uttar Pradesh state elections. Initially, it was a brilliant political move in which, notwithstanding their suffering, the afflicted saw their torment as a temporary hardship inflicted on them by a Robin Hood figure who was punishing the rich to reward the poor, even if it meant waiting a while.

Initially, Modi won the throw of the dice. The courts did not interfere. Political opposition was virtually nonexistent. His party’s obvious preference for social and cultural transformation over economic reform and modernisation has paid political dividends. But for how long? His constituency is not very different from Indians who did not support him. The expectation of enhanced prosperity—the acche din pledge—still rings in all ears. If you create a good slogan you could well wind up being hoisted on your own petard. Catchy slogans, as all spin doctors will tell you, are a double-edged sword. People don’t forget them.

And the early chickens seem to be coming home to roost. The propaganda benefits of notebandi have lived their shelf life. The biggest dividend was UP. What counts now, as the euphoria wanes, following Karnataka, the crystallisation of a viable political opposition and the recent nationwide bypolls, is the ground reality and the longer-term economic consequences. Manufacturing and construction have slumped. Private investments in new projects are at a standstill. While gross domestic product (GDP) growth was 6.1 percent, gross value added (GVA) growth—a metric that more economists now favor as it excludes indirect tax collection—slowed even more sharply in the fourth quarter to 5.6 percent, compared to 6.7 percent in the third quarter, says another recent study.

These figures have not been conjured up by propagandists. These are the latest figures from no less a source than the Central Statistics Office which the prime minister and his team can scarcely afford to ignore.

And will Prof Arun Kumar have the last laugh on demonetisation? He insists that demonetisation has not only not dented the black economy, but has damaged the white economy, especially the unorganised sectors.

Add to these problems the thoughtless way in which the hastily drafted cattle-trading ban is being imposed and the government may be taking a swipe at one of the largest sectors of the economy of the poor. As Down To Earth puts it:

Prof Arun Kumar insists that demonetisation has not only not dented the black economy, but has damaged the white economy, especially the unorganised sectors.

“Forget about the loss of revenue from exporting buffalo meat after government’s ban on procuring animals from market place for slaughter, the real impact will be on India’s poorest farmers and the economy of livestock which is worth more than Rs 3 lakh crore. It is all set to kill an economy that India’s small and marginal farmers switched over to as adaptation to uncertain monsoon and dwindling income from regular crops.”

Arun Kumar bemoans the fact that “political parties are now bereft of ideology or principles—the aim is to get to power to serve the vested interests who fund them. Businessmen are scared of the government and do not wish to be seen as opposed to it. With the changes introduced in the recent Budget, the fear of a raid raj has only grown. The media has been adversely impacted”.

The critical decision Modi will have to make—and make very soon—is how far can he stretch the Cultural Raj at the expense of real economic growth in order to avoid the possibility of a popular backlash if acche din remains a chimera.

And herein lies a lesson for Modi’s opponents on the Right as well as the Left not to exult in haste in the celebration of the end of the Modi honeymoon. It is far from over. But there is a lot he has not done.  He has NOT: cleaned up the Ganga; restored 8 percent GDP growth; created 3 crore jobs as promised (instead unemployment is soaring in a phenomenon called “jobless growth”) introduced judicial reform; ended the rape and subjugation of women; rebuilt our cities or renewed urban India; accelerated farm production; introduced meaningful tax reform; introduced disinvestment plans; revamped Air India; cut down the bureaucracy; shut down terrorist camps in Pakistan, attracted make-in-India investment.

He would be courting national disaster and historical condemnation if he were to allow anything similar to the Gujarat communal riots happen again in India during his term. The test of his leadership as a no-nonsense pragmatist will lie in his political dexterity in sidelining the forces—including retrograde “Hinduism”—which interfere with his larger development vision. The alternative is to fester in the opprobrium of 2002.