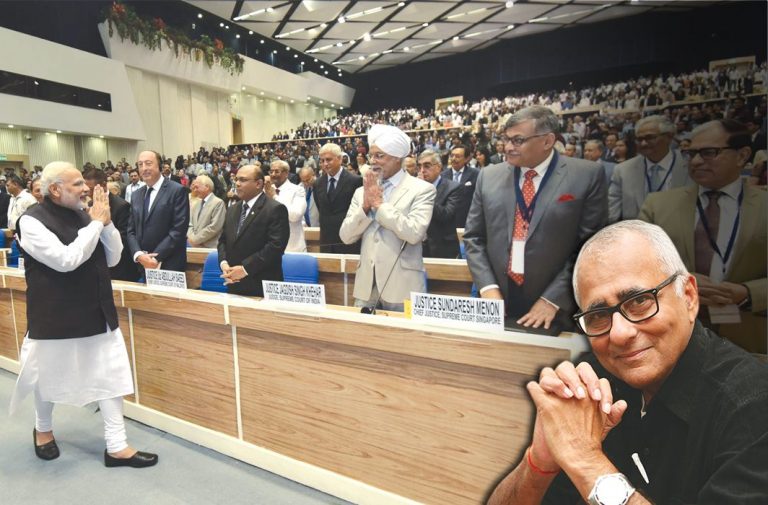 Above: PM Modi at the conference on National Initiative towards Strengthening Arbitration and Enforcement held in New Delhi in October 2016/Photo: UNI

Because there’s so much easily combustible fuel to stoke the fires of breast-beating about the failings in the Indian judicial system, we often miss many of the positive developments in all the smoke. In the midst of all the negative clutter emanating from the recent judges’ mutiny in the Supreme Court, mounting case pendency, the abysmal failure to fill vacancies in the benches, internecine quarrels and indiscipline in the higher judiciary, the stalemate over the Memo-randum of Procedure (MoP) with the Executive, an important, positive development last week went virtually unnoticed.

Prime Minister Narendra Modi’s cabinet gave an enthusiastic nod to a vital piece of legislation that could help India move more swiftly in the direction of becoming an important international hub in legal arbitration. This would not only bring foreign arbitration to India, help ease the case burden on the courts but benefit the country economically in the long run.

Advocate-writer Diljeet Titus, who has covered and analysed this cabinet decision for this issue of India Legal, makes a powerful point in his opening para. He notes that according to the World Bank’s Ease of Doing Business rankings for 2017, India comes out looking pretty wretched on enforcement of contracts, with an average of 1,420 days taken for enforcement. “A huge backlog of pending cases and endemic delays in Indian courts has acquired notoriety worldwide and it impedes economic growth and development as some investors have expressed serious concern in investing in India for this reason. It is therefore the need of the hour to have efficacious and viable alternatives to litigation,” he writes.

A widely acknowledged substitute is arbitration, also known as Alternative dispute resolution (ADR). According to an official spokesman for the Union government, the initiative is a part of the efforts of the government to encourage institutional arbitration for settlement of disputes and make India a centre of robust ADR mechanism.

In a continuing effort to improve and encourage the arbitration scenario in India, the original Arbitration and Conciliation Act, passed in 1996, was first amended in 2015 after the Modi government took office. The idea was to make the arbitration process user-friendly, cost-effective and ensure speedy disposal and neutrality of arbitrators. But this needed further tweaking in order to give a boost to institutional arbitration as against ad hoc arbitration as well as to remove snags.

The vital piece of legislation could help India move more swiftly towards becoming an important international hub in legal arbitration. The idea was to make the process user-friendly, cost-effective and ensure speedy disposal and neutrality of arbitrators

The government appointed a high-level committee (HLC) under the chairmanship of Justice BN Srikrishna, a retired Supreme Court judge, and it was given the mandate to devise a road map to promote institutionalised arbitration mechanisms in India and “evolve an effective and efficient arbitration eco-system for commercial dispute resolution”. The HLC submitted its report on July 30, 2017. Its main recommendation was to improve institutional arbitration by establishment of an independent body to lay down standards, make the arbitration process more party-friendly, cost-effective and ensure timely disposal of arbitration cases. This new body—the Arbitration Council of India (ACI)—will grade arbitral institutions and accredit arbitrators by laying down norms and “take all such steps as may be necessary to promote and encourage arbitration, conciliation, mediation and other ADR mechanisms”.

The creation of the ACI, as Titus points out, “is a positive and progressive step towards competing with other highly acclaimed international arbitrational institutions like SIAC, LCIA and HKIAC and will facilitate India’s emergence as one of the most effective and efficient arbitral seats around the globe”.

While the detailed bill is not yet available for public scrutiny, the government has made available a short summary:

There is little doubt that the government is serious about making arbitration a preferred mode for settlement of commercial disputes by making it more user-friendly and cost-effective. This will lead to expeditious disposal of cases. It is a positive step in the process of judicial reform and needs to be commended.