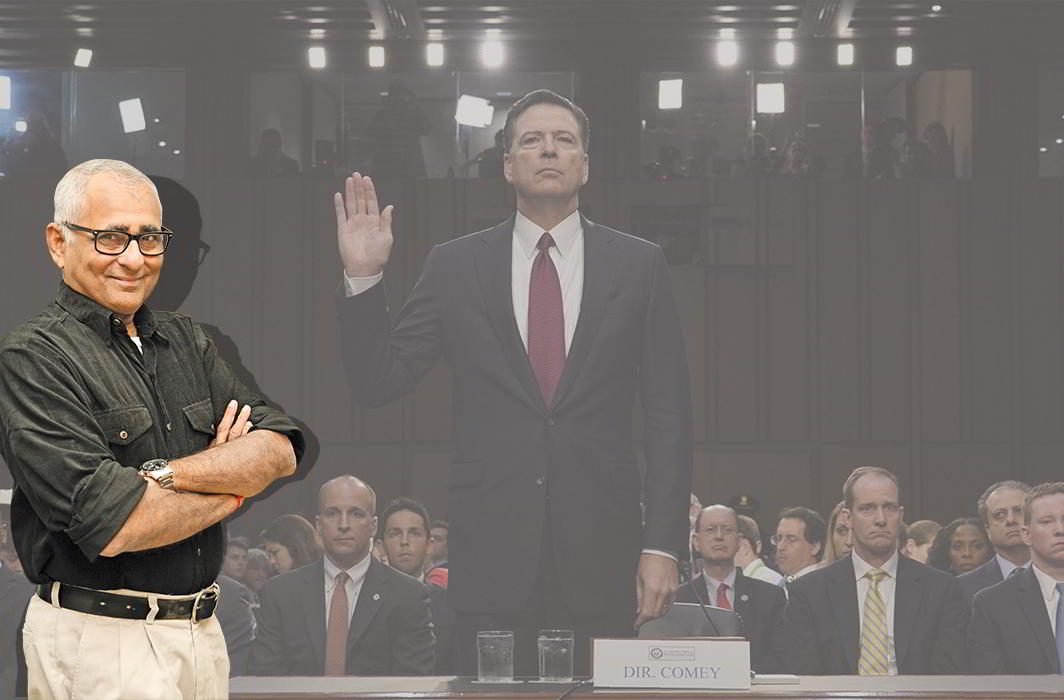 Given the nature of the Indian political system in which the doctrine of separation of powers—the cornerstone of accountable governance—lies supine at the altar of executive privilege, I doubt that we will ever see a televised session of parliament in which a top law enforcement officer openly calls a prime minister a liar and points the finger at him for trying to derail an investigation of collusion between his closest advisors and a hostile foreign power to influence the course of a general election.

In India’s Westminster-style democracy, the legislature, for all intents and purposes, is a slavish extension of the executive (members of parliament are also ministers) and the executive can hardly be expected to conduct an impartial investigation into its own wrongdoings. The accountability process is further stymied by ministerial control of the bureaucracy, particularly law enforcement.

In these circumstances, obstruction of justice, or targeted prosecution of political opponents, is the everyday rule.

Small wonder then that Indians were flabbergasted by the spectacular real-time reality TV show in which a sacked FBI director surgically rubbished the character and credibility of his former boss, the most powerful man in the world, no less than the President of America himself. And that too in testimony before the powerful 15-member US Senate Select Committee on Intelligence, comprising of Democrats and Republicans (the President’s own party).

Public investigations by bipartisan Congressional committees are de rigueur in the American system. Senior administration officials are regularly hauled up on Capitol Hill to testify under oath on the functioning of their departments and to answer charges of misfeasance or malfeasance. Not all of them attract a great deal of press. But former FBI Director James Comey’s broadside against President Trump was singular in that it evoked memories of Nixon and Watergate in which the issue of obstruction of justice caused the late president to resign in disgrace.

There is nothing remarkable about an FBI chief being fired by the president at whose pleasure he serves. President Bill Clinton also dismissed his FBI chief, William Sessions, in 1993 for proven misconduct.

A president can dump the FBI boss with or without giving any reason. But there are subtleties in the American system. The FBI chief reports directly to the attorney general and not to the president. And FBI directors keep presidents at arm’s length, scrupulously guarding their autonomy as the top federal law enforcement and domestic counter-terrorism and counter-espionage officers.

What is remarkable, however, is that Trump fired the man heading a criminal investigation into the president’s election campaign. “The FBI has gone after presidents before,” Tim Weiner, a Pulitzer Prize-winning journalist and historian told VOX, pointing to the Bureau’s probes of Richard Nixon during Watergate and Ronald Reagan during the Iran-Contra scandal. “But never has a president dismissed an FBI director when members of the president’s administration and members of the president’s campaign team were under investigation for colluding with a foreign power (Russia).”

Americans treat law enforcement as a religion. They also believe that public officials owe their loyalty to the constitution and not to their political bosses. And obstruction of justice, when proven at any level, receives zero tolerance, cutting across party lines. Did Comey accuse Trump of this? And did Trump obstruct justice? Did Trump demand personal loyalty over loyalty to the constitution? Those are the key questions being debated across America.

In a lukewarm attempt to shield Trump from this charge, Senator James Risch, a Republican from Idaho, zeroed in on this point during the Senate hearings at which Comey testified. He wanted to know whether Trump had “ordered” or “directed” Comey to drop the probe of Michael Flynn, his national security adviser, whom he was forced to fire barely three weeks after being sworn in because he had not revealed his secret contacts with the Russians.

This is how the exchange went:

SENATOR RISCH: There’s 28 words  (in your written statement) there that are in quotes, and it says, quote, “I hope”—this is the president speaking—“I hope you can see your way clear to letting this go, to letting Flynn go. He is a good guy. I hope you can let this go.” Now those are his (the president’s) exact words, is that correct?

RISCH: And you wrote them here, and you put them in quotes?

RISCH: Thank you for that. He did not direct you to let it go.

COMEY: Not in his words, no.

RISCH: He did not order you to let it go.

COMEY: Again, those words are not an order.

RISCH: He said, “I hope.” Now, like me, you probably did hundreds of cases, maybe thousands of cases charging people with criminal offenses. And, of course, you have knowledge of the thousands of cases out there that— where people have been charged. Do you know of any case where a person has been charged for obstruction of justice or, for that matter, any other criminal offense, where this — they said, or thought, they hoped for an outcome?

COMEY: I don’t know well enough to answer. And the reason I keep saying “his words” is I took it as a direction.

COMEY: I mean, this is the president of the United States, with me alone, saying, “I hope” this. I took it as, this is what he wants me to do.

RISCH: You—you may have taken it as a direction, but that’s not what he said.

COMEY: Those are exact words, correct.

RISCH: OK, do you—you don’t know of anyone that’s ever been charged for hoping something. Is that a fair statement?

Risch probably thought he had scored a point. Did he? Here’s the definition of Obstruction of Justice from the US Federal Legal Code:

That definition does not require that there be a direct order that would quash or affect the investigation. “The key question here is whether the president acted with corrupt intent,” Renato Mariotti, a former federal prosecutor, told CNN.

On a personal note, I covered the Watergate scandal as a reporter in Washington, and the present situation brings to mind a great American hero Senator Sam Ervin who chaired the Senate Select Committee on Watergate and brought down Nixon. I see analogies to the current Trump situation.

Ervin was an uncomplicated, strict constitutionalist who believed the Social Contract and Rule of Law to be living entities. He came finally to the conclusion that Nixon and his top aides resorted to dirty tricks to weaken the Democratic Presidential campaign and increase Nixon’s chances for winning in 1972. When information surfaced, Nixon and his cronies lied to investigators, resorted to cover-ups and got caught. Ervin opened his Committee’s hearings with these famous words still engraved in the minds of the reporters who covered that event:

“If the many allegations made to date are true, then the burglars who broke into the Democratic National Committee at the Watergate (apartment) were in fact breaking into the home of every American citizen…. And if these allegations prove true, what they were seeking to steal was not the jewels, money or other precious property, but something much more valuable: the right to vote in a free election.”

As Benjamin Wittes, editor-in-chief of Lawfare and a Senior Fellow in Governance Studies at the Brookings Institution, put it: “This is the Trump presidency. There is no evidence that any chains can bind this president: not lawyers, not norms, not procedures, not repeated screw-ups of the sort that educate other leaders, and certainly not the mere expectations of decent public servants. But the problem is that the United States is responsible for his actions—and we are paying daily the price for them, particularly in our international relations but also in our domestic governance. It simply will not do any more for politicians to shield their eyes and say the equivalent of “even if Trump did act inappropriately, and I’m not saying he did, it’s not my problem because he’s a beastly minotaur and no chains can bind him”.

Today there is no Sam Ervin or anybody of his stature in the American Senate. Both houses are controlled by Republicans, some of whom blindly support Trump and some who maintain a studied silence. But exceptional circumstances give birth to exceptional heroes.