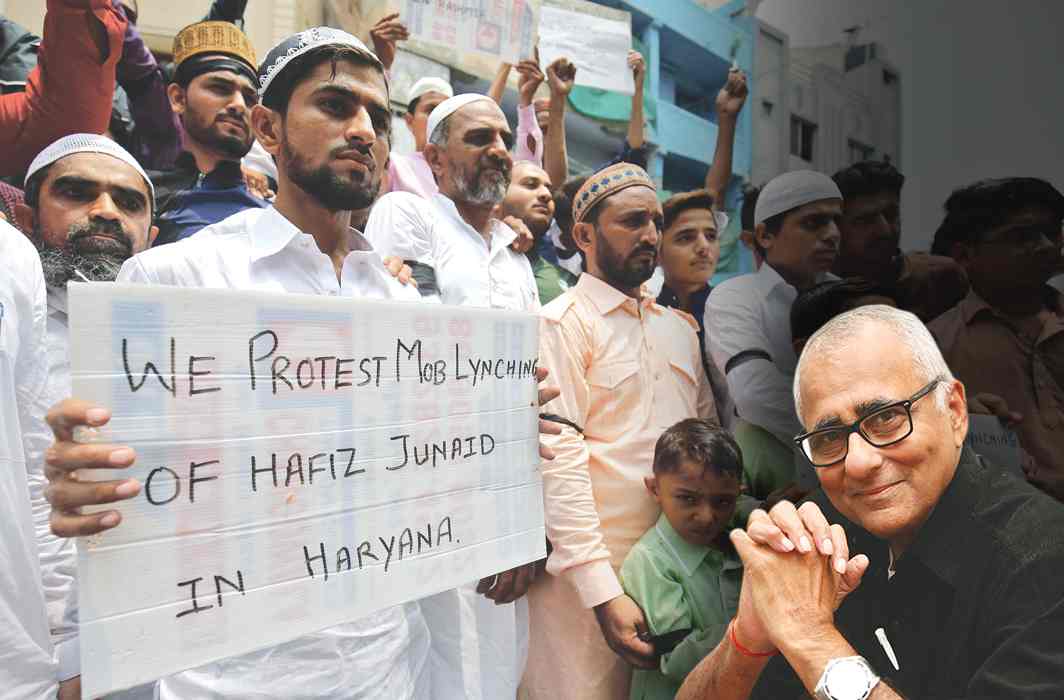 Above: Muslims protesting against mob lynching in Ahmedabad/Photo: UNI

We return, again, on this page, and in our cover story—and we shall do so repeatedly as and when the occasion demands—to what has become the most perilous threat to democracy, the Constitution, the Rule of Law, to humanity, to religion, to the social order—indeed to the very concept of what historian AL Basham called, “The Wonder That Was India”: the proliferation of the murderous mob culture as an instrument of state policy. A complicit, stand-by-and-watch state in mass lynchings organised to create political terror or fan religious hatred is not a state at all. It is, in effect, the most diabolical state of nature in which man walked not free and uninhibited but cowered in fear of an existence that was, in the words of Thomas Hobbes, “nasty, brutish, and short”.

The rule of the lynch mob is the very anti-thesis of law, of civilisation. I cannot for the life of me figure out why, for its glory, pomp and grandeur, the Roman Empire was called a “civilisation”. Only because it had a “democratic” Senate, built coliseums, created a framework of jurisprudence? Actually, an empire that thrived on mass slavery, whose emperors could teach modern fascist dictators a lesson or two in cruelty, which fed Christians to the lions, feasted on blood and gore as gladiators pummelled one another to shreds before deliriously cheering crowds, was the epitome of barbarianism.

India is what we like to describe as a “civilisational” land and country. At its worst, in the past, that epithet suited Bharat better than it did Rome or Greece or the Ottomans or Spain and their murderous inquisitors. Sad, but true, modern independent India was born in the worst kind of bloodshed, ethnic cleansing and forced migration the world has ever seen.

Bapu Gandhi, the father of this new nation, sensed the degeneration of the Indian ethos in the marrow of his bones. As Dr Ram Puniyani succinctly puts it, countering hate and promoting amity “became the central message of Mahatma Gandhi, who struggled to promote peace, in the highest traditions of his Hinduism. As the fake news is assuming frightening proportions and is doing serious harm to the concept of fraternity inherent in Indian nationalism, we need to retune ourselves to the core value of amity, which was the foundation of the freedom movement and is very much the part of our Constitution”.

It is to this that the Supreme Court under the leadership of Chief Justice Dipak Misra turned last week. In a scathing indictment of the spreading culture of mob lynchings, his bench said enough is enough! If you read between the lines, the message that goes out loud and clear is that the Indian state and the organs of governance have been derelict in performing their most basic duty—to protect the right to life and enforce the law. The message is implicit. After all, there are enough laws already in the books to prevent lynchings or murderous mobs from going on the rampage and also punishing the perpetrators.

The rule of the lynch mob is the very anti-thesis of law, of civilisation. I cannot for the life of me figure out why, for its glory, pomp and grandeur, the Roman Empire was called a “civilisation”. India is what we like to describe as a “civilisational” land and country.

The very fact that despite the existing remedies available to the state machinery to crack down on the lynching culture (in fact, there is a secret grudging admiration in this country for how the British extinguished the savage thuggee gangs), the apex court decided to deliver an abecedarian lecture on how to enforce the law as well as a directive to enact special legislation, was a body blow to the government for failing to perform its constitutional functions and duties to the public. 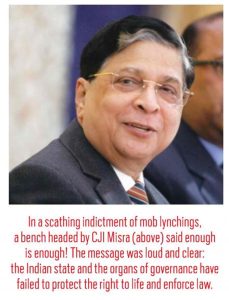 Our cover story details how the Supreme Court neatly divided its sermon to the government under preventive, punitive and remedial actions to be taken. To give the reader a flavour of the judgment, I summarise below the main points made by Chief Justice Misra which should be made must reading for anybody interested in reforming a nation going horribly offtrack from the core moral centre of its Founding Fathers: