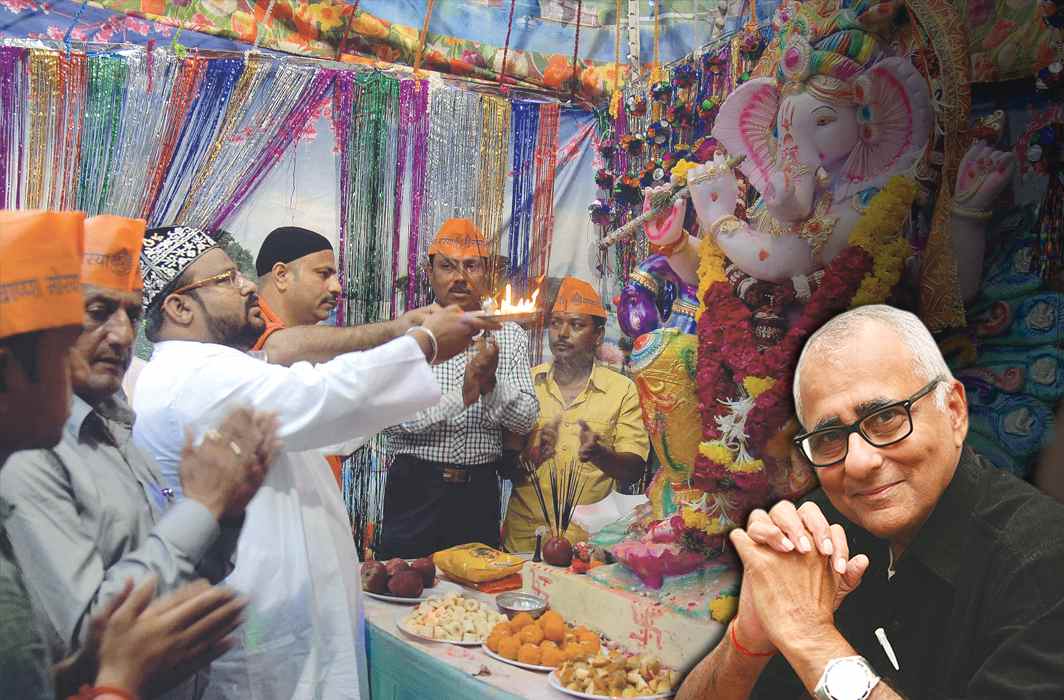 Above: Muslims and Hindus offering prayers to Lord Ganesha in Ahmedabad

This year seems not to have begun too propitiously either for the government or the nation. The leitmotif of the past two years—increasing caste and religious polarisation, the blurring of distinctions between patriotism and militant nationalism—seems to have etched itself even more deeply into the national psyche with ruling party members and legislators mounting new assaults on the validity of the secular Constitution. The New Year dawned with the explosion of new caste conflicts in Maharashtra with the Dalits pitted against upper caste militancy in street fights and demonstrations in Mumbai—the country’s financial capital.

The BJP’s elder statesman, Yashwant Sinha, proclaimed that the mandate given to the Modi government has been “wasted”. The economy, he feels, cannot now recover from experimental adventurism which sent the backbone of Indian entrepreneurship—small and medium enterprises—into a tailspin; a view, incidentally, shared by maverick Subramanian Swamy. One prominent website predicted that this pre-national election year would see “peak Hindutva” with growing intolerance towards minorities and bigotry and hatred paying political dividends as what were once considered “fringe views and groups” are gaining mainline acceptance.

Surely, India’s venerable Supreme Court which has so far mostly risen above politics as it has, over time, tried to grapple with executive excesses such as the misuse of Article 356 and possible misuse of the Aadhaar card to destroy the right to privacy, must be worried and anxious. In this surcharged atmosphere of politicisation of the steel frame of Indian governance, of  blatant sloganeering of falsehoods to win elections, the Court is also straddled with critical decisions on the Babri Masjid tangle and other matters which impact religion and privacy. Will the Court restore a semblance of sanity in what is rapidly becoming a one-sided narrative aimed at capturing power, or will India as a nation rise above its baser instincts on the strength of the common sense and goodwill of its people?

Well before the last year came to a close, New York Times veteran columnist Richard Cohen, looking at India from afar, concluded that the success of nations, particularly India, “involves a mysterious alchemy” that leaves space for civilized discourse. Citing examples, Cohen noted that Brazil and South Africa have immense problems, “but you may count on them to succeed because the fabric of their nationhood is resilient. In a similar way, anyone betting against India over the long term would be foolish. Openness and capaciousness tend to win.”

In his article, titled, “The Inspiration of Ample India”, he elaborates that India, in its immensity, makes you believe that. It is a place of awe. “I spend too much time in parts of the world trapped by smallness. History illuminates; it also imprisons.”

India is “ample”, he reiterates. Soon to be the most populous country on Earth, it is home to close to a billion Hindus, some 172 million Muslims and tens of millions of Christians. He notes: “Cochin is dotted with churches and mosques. Nobody cares too much. There’s room for multiple truths. It is this that makes the country such a source of hope. Whatever the errors of policy, and whatever the occasional flaring of terrible religious violence as in Gujarat in 2002, the nation’s basic alchemy is good—with or without large-denomination bank notes.

“In  the end, intangible qualities—the empowerment of women (India has a long way to go), the capacity to place the future over the past, and the space afforded for civilized disagreement—are better indicators of the health of a society than economic statistics.”

I love India, too. While I commend patriotism, I do not subscribe to blind nationalism. I also love Cohen’s bright perception, but I believe it borders on Indomania. Cohen is also a bit of an Indophile and therefore, given to bouts of romanticism and hyperbole.

There are, of course, many elements of many truths in what he observes. Yes, India does have a peculiar DNA composed of genes which tend to leapfrog over historical grievances and the politics of hate and vengeance. His reflection on the innate capability of the poorest to live a life of wholeness alongside the richest—and without revolutionary venom or vindictiveness—also reveals a peculiarly Indian trait in which the Indian, as Lin Yutang said about the Chinese, sees the world go by with one bemused eye, while the other looks inward.

Most Indians believe in reincarnation and rebirth as they have, unbrokenly, for 5000-6000 years. If you ask them why, they’ll think the question to be as stupid as questioning whether we breathe in oxygen. They have a this-too-shall-pass attitude towards life and death.

That is perhaps what answers Cohen’s riddle of how a billion-plus people with a divergence of faith, language, ethnicity, colour, food habits, monstrous economic disparities and tribal habits have managed to converge into a relatively cohesive and mostly tolerant social conglomerate.

The real wonder is that the Partition of India in 1947 (when Muslim Pakistan was carved out of India)—a virtual civil war created by the British as a condition of their giving up the Raj—in which the most savage butchery involving millions occurred during possibly the largest cross migration in modern times, did not leave behind a wrecked and blistered region like the Middle East after the break-up of the Ottoman Empire, or even a fractured and seething Europe after the fall of the Austro-Hungarian Empire or the crises in the Balkan states.

What emerged was a stronger India aflame with poverty and exploitation, yet led by wise men and women who kept anarchy and class warfare at bay with minimal repression. There were famines in the early years, caste discrimination, misogyny, patriarchal hegemony, mistreatment of widows, outbursts of religious savagery…but the idea of a constitutional India guided by principles of liberty and the rule of law held.

And yet the Ancient, along with superstition, remained untouched, witch doctors, voodoo, a tenacious belief that mythology was real, and without the saints and gods who populated that world, today’s India would not make much sense or even be worth living for most Indians. To understand India, you must first realise that Nothing is incongruous here.

Cohen, however, misses the point that there is now, in the name of “cleaning up India” a political movement (another viral strain) that seems to have emerged, which seems resistant to the antibiotics of Indianness, some of which I have described above. It abhors individual freedom, and the idea of equal status for all religions. It has adopted a narrow concept of pan-Hinduism as its battle cry. It is spreading across India. It is in power in Delhi. It is spawning intolerance, censorship, suppression of student debates on campuses, media oligopolies, crony capitalism, militant vegetarianism, lynch mobs, leaders with private religious armies. Minorities are running scared. So are intellectuals, editors and “Muslim appeasers”.

But I guess a lot of Indians are also looking at this with one eye shut. This, perhaps, will pass, too. And maybe Cohen is right, India will continue To Overcome.