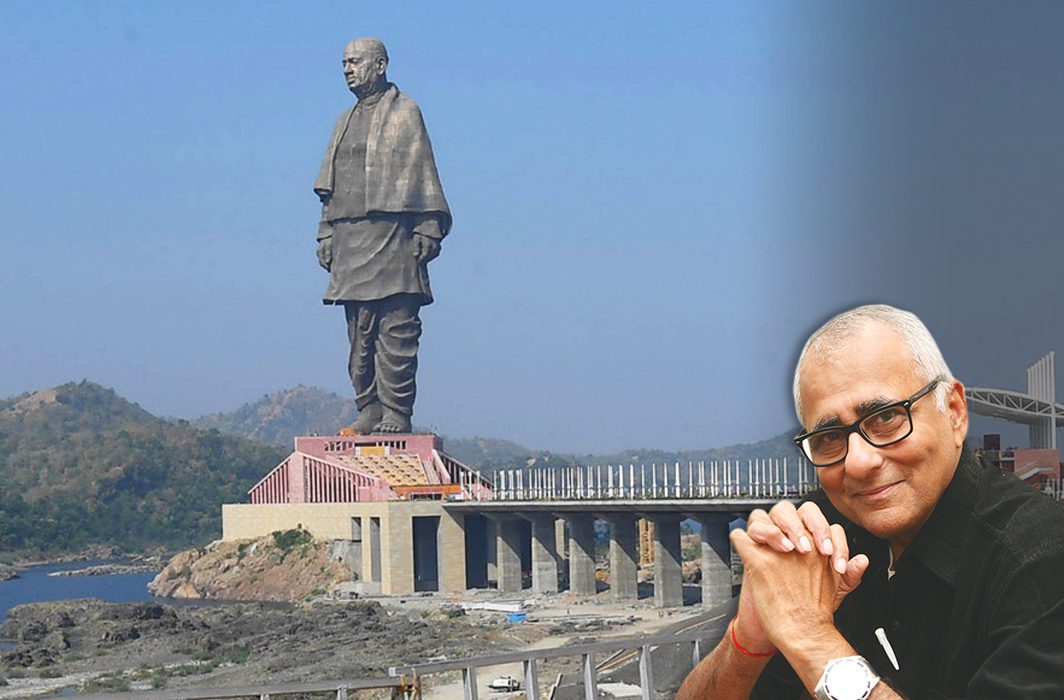 Actually, Prime Minister Narendra Modi’s political party needs no external icon in order to give itself more credibility or acceptability. The Bharatiya Janata Party already had enough going for it: an attractive acronym—“BJP”; a charismatic former poet-prime minister, Atal Bihari Vajpayee; a vote-catching orator, Madison Square rockstar current PM; an ostensibly post-Nehruvian-socialism economic ideology of laissez faire supply side economics; a catchy slogan, “party with a difference”. So why in heavens does it need Sardar Patel, the party’s ideological nemesis and a close friend and ally and staunch Congress colleague of the BJP’s bête noire Jawaharlal Nehru?

Modi has just inaugurated with ecstatic fanfare the mostly made-in-China 182-metre “Statue of Unity”—the tallest in the world—of Patel. Sym­bolically, Patel now becomes the political patron saint of the BJP. The idea seems to be to appropriate this iconic administrator and indefatigable freedom fighter, who was also a Gandhian nationalist, as a symbol of the BJP’s roots in the national struggle for freedom, and give real flesh and blood to its modern “nationalist” agenda.

Sadly, no matter how many statues it erects or textbooks it changes, it cannot erase history. Its antecedents are indelible. The forebearers of the BJP did not participate in the Quit India movement. In fact, Patel as home minister banned the RSS following Gandhi’s assassination in 1948. The BJP, however, tends to overlook this fact and stresses, rather, the welcome words addressed by Patel shortly after Independence in a speech delivered in Lucknow on January 6, 1948.

Inviting the Sangh to join the Congress mainstream, Patel intoned: “In the Congress, those who are in power feel that by the virtue of authority they will be able to crush the RSS. You cannot crush an organisation by using the danda. The danda is meant for thieves and dacoits. They are patriots who love their country. Only their trend of thought is diverted. They are to be won over by Congressmen, by love.”

Three weeks later, Gandhi was shot dead by Nathuram Godse, associated with the extreme Hindutva right-wing. Patel completely changed his views on the RSS. According to journalist Durga Das, on July 18, 1948, Patel wrote to Dr Syama Prasad Mukherjee, who later founded the Bharatiya Jana Sangh: “As regards the RSS and the Hindu Mahasabha… our reports do confirm that, as a result of the activities of these two bodies, particularly the former (RSS) an atmosphere was created in the country in which such a ghastly tragedy became possible.”

Historian Desraj Goel also quotes a September 11, 1948, letter from Patel to Guru Golwalkar, RSS supreme leader, following his release from jail in the aftermath of Gandhi’s assassination. Every line is worth remembering as India celebrates the inauguration of the Statue of Unity:

“Received your letter dated 11th August. Jawaharlal has also sent me your letter of the same date.

“You are very well aware of my views on the RSS. I have expressed these thoughts at Jaipur in December last month, at Lucknow in January. The people had welcomed those views. I had hoped that your people also would accept them. But they appear to have no effect on the RSS persons, nor was there any change in their programmes. There can be no doubt that the RSS did service to the Hindu Society. In the areas where there was the need for help and organisation, the young men of the RSS protected women and children and strove much for their sake. No person of understanding could have a word of objection regarding that. But the objectionable part arose when they, burning with revenge, began attacking Mussalmans. Organising Hindus and helping them is one thing but going in for revenge for its sufferings on innocent and helpless men, women and children is quite another thing.

“Apart from this, their opposition to the Congress, that too of such virulence, disregarding all considerations of personality, decency or decorum, created a kind of unrest among the people. All their speeches were full communal poison. It was not necessary to spread poison and enthuse the Hindus and organise for their protection. As a final result of the poison, the country had to suffer the sacrifice of the valuable life of Gandhiji. Even an iota of sympathy of the Government or of the people no more remained for the RSS. In fact the opposition grew. Opposition turned more severe, when the RSS men expressed joy and distributed sweets after Gandhiji’s death. Under these conditions it became inevitable for the Government to take action against the RSS.

“Since then, over six months have elapsed. We have hoped that after this lapse of time, with full and proper consideration the RSS persons would come to the right path. But from the reports that come to me, it is evident that attempts to put fresh life into their same old activities are afoot. I once again ask you to give your thought to my Jaipur and Lucknow speeches and accept the path I had indicated for the RSS. I am quite certain that therein lies the good of the RSS and the country and moving in that path we can join hands in achieving the welfare of our country. Of course, you are aware that we are passing through delicate times. It is the duty of everyone from the highest to the lowliest in this country to contribute his mite, in whatever way possible, to the service of the country. In this delicate hour there is no place for party conflicts and old quarrels. I {am} thoroughly convinced that the RSS men can carry on their patriotic endeavor only by joining the Congress and not by keeping separate or by opposing. I am glad that you have been released. I hope that you will arrive at the proper decision after due consideration of what I have said above. With regard to restrictions imposed upon you I am in correspondence with the CP Government. I shall let you know after receiving their reply.

All who now gaze upon PM Modi’s Statue of Unity must surely ponder the ironies it evokes.