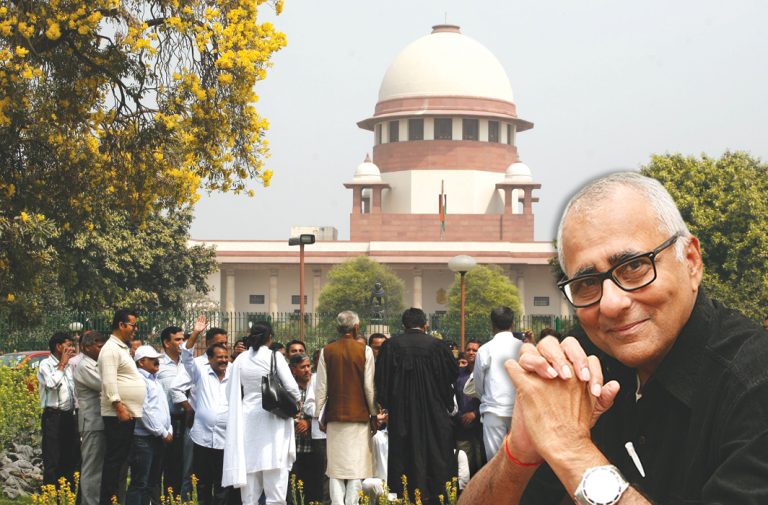 Even as the 2019 general election hurtles towards a conclusion and public attention is rivetted to the nation’s political arena, controversies surrounding the judiciary continue to compete for the headlines as they have been for the past several weeks.

As India Legal has previously reported, the focus is once again on the Supreme Court with Chief Jus­tice of India (CJI) Ranjan Gogoi weathering a storm created by allegations of sexual harassment followed by official intimidation made in a sworn affidavit by a woman once employed in the CJI’s office.

The news is ubiquitous and hardly needs repetition in this space. But in an election year when the TV screens have little else to show except for wall-to-wall political rallies across the country, one assembly that stood out and received special notice last week was a mass demonstration outside the Supreme Court demanding fair play for Justice Gogoi’s accuser.

The question asked was whether she had received her share of due process by the highest court of the land which must be above reproach or, as that other axiom goes, “cleaner than a hound’s tooth”. It is a legitimate standard to be applied to all those who have the responsibility of separating fact from fiction for the Indian public.

The most recent brouhaha is over whether the system followed by the Court in giving a clean chit to the CJI by a panel of three Supreme Court judges—two of them women—before which the accuser refused to appear to tell her story because she, for various reasons, believed the system was loaded against her, was the proper way to conduct the inquiry. Or, whether Gogoi was following the precepts of natural justice in summoning an emergency suo motu hearing in the presence of the attorney general in which he proclaimed his innocence and condemned the complaint as a conspiracy.

Does the system, it is widely being asked, support a culture of impunity for Supreme Court judges? Are they immune from the Rule of Law and its overarching majesty? How can they be held accountable? And herein lies the rub. The system has deliberately skewed the burden of proof in favour of judges because they cannot be made sitting ducks for any party with a vested interest to take potshots at.

One argument being made in this particular case is that an independent panel could have been established to examine the charges against Justice Gogoi. But what then? Who would appoint it? Would such a panel be empowered to remove a sitting Supreme Court judge? Only Parliament with a requisite majority can do that. Another suggestion is that the complainant should have filed an FIR and sought redress starting with the lower courts. In the real world, though, how likely is it that a local police station would dare to accept such an FIR or even a magistrate take cognisance?

Also, from the debates still raging on this subject, it is unclear whether the Sexual Harassment of Women at Workplace (Prevention, Prohibition and Redressal) Act, 2013 (“POSH Act”) applies to judges and if so, to what extent. When a sitting Madhya Pradesh High Court judge was accused of sexual harassment in 2014, the Supreme Court ruled that “in-house procedures” (akin to the Vishakha system) could be used in the inquiry process (Addl. District & Sessions Judge ‘X’ v. High Court of M.P (2015) 4 SCC 91).

In pursuance of this, the CJI can form a three-member panel of Supreme Court judges to examine allegations of misconduct received against a sitting judge. The CJI then oversees and enforces the final outcome. But what if the complaint is against the CJI? The law is not clear on this. And nor has there ever been any such complaint until the current one against Justice Gogoi.

The question most observers are struggling to answer is that if an in-house inquiry in which a CJI can choose the judges to judge a complaint against him is an incestuous exercise, then would not a system in which outsiders are automatically appointed by some other branch of government for the same purpose encourage the filing of spurious complaints motivated by political opponents of a particular judge or his judgments? This would be a fatal blow to the independence of the Supreme Court and the judiciary as an institution. It is no solution.

Let’s travel to America which not only has one of the most mature and tested legal systems in the world,   but is also a country whose lawyer-founding fathers influenced the creation of the Indian Constitution. The Americans have come a long way in trying to deal with judicial misconduct in federal and circuit courts. But the US Supreme Court, however, is not subject to this dis­cip­linary mechanism. Short of impeachment by the legislature with requisite majorities in both houses, there is little that can be done to remove or discipline a Supreme Court judge.

There is, however, a much stricter administrative standard for the federal courts (akin to Indian high courts) and circuit courts (an appeals court system layered bet­ween the Supreme and high courts). The country is divided into 12 regional circuits. In each is a court of appeals, one or more district courts, associated bankruptcy courts and a circuit judicial council.

Judicial councils comprise an equal number of district judges and court of appeals judges (“circuit judges”) and the chief judge of the court of appeals as chair. The councils are generally responsible for, in the words of the statute that created them, “the effective and expeditious administration of justice within its circuit”, although as a practical matter, councils generally tread lightly in overseeing the courts in their circuits.

Under a 1980 law, the Judicial Conduct and Disability Act, any aggrieved person can file “a written complaint” alleging judicial misconduct or performance-degrading disability. The Act defines misconduct as “conduct prejudicial to the effective and expeditious administration of the business of the courts”. This includes sexual harassment.

Under the Act, a chief circuit judge, whether on a normal complaint or a transferred complaint, has several options, including conducting a “limited inquiry” to assess whether the complaint alleges facts reasonably in dispute. If so, the chief judge must appoint what the Act calls a “special committee” comprising the chief judge and other district and circuit judges to investigate them. That happens very rarely, according to Russell Wheeler, author of a Brookings Institution commentary on the subject. “Much more often, chief judges dismiss complaints on a variety of grounds, including that the complaint challenges the correctness of a judge’s ruling or is frivolous or lacks any factual foundation.”

Disciplining judges has become a matter of public debate and controversy in America ever since the Senate confirmation of Brett Kavanaugh to the US Supreme Court following explosive hearings last Septem­ber on his fitness for the post following charges of sexual assault levelled against him by Dr Christine Ford.

After he was confirmed (and now is a sitting Justice), some 15 serious conduct-related allegations against him stemming from his behaviour while he was a circuit judge prior to his confirmation to the Supreme Court were dropped by the investigating judges before whom they were pending on the grounds that “action on the complaint is no longer necessary because of intervening events”.

The intervening event in Judge Kavanaugh’s case is his appointment as a Supreme Court justice. That is because the Act covers complaints only about circuit judges, district judges, bankruptcy judges, magistrate judges, and judges of some special courts.

Judges leaving the bench to avoid discipline is a sore point. Chief Justice John Roberts appointed a “Federal Judiciary Workplace Conduct Working Group” in the wake of sexual harassment allegations against several judges. The Group reported “concern about seeming lack of punishment for a judge who, under allegations of serious misconduct, retires or resigns and thereby terminates the disciplinary proceeding”.

In the case of a US Supreme Court justice, the only available disciplinary remedy is impeachment by the House and conviction and removal by the Senate. But even if the majority of the House agrees on impeachment, it will likely fail unless two-thirds of the Senate votes to convict the accused Justice.

After the judicial council considers a special committee’s report, it will generally issue an order on the complaint and provide the complainant with a copy of it. The order may dismiss the complaint, or conclude it because appropriate corrective action has been taken or intervening events have made the proceeding unnecessary.

If the order does not dismiss or conclude the complaint, it may pass sanctions already mentioned against the judge. This American model is at least a worthy template that sets the stage for greater judicial accountability. The Justice Gogoi matter, even after its dismissal, has flared into a national controversy which will not die down until another, parallel quasi-judicial inquiry into allegations of a conspiracy against the CJI is concluded.

Nonetheless, it is a time for reflection. Upholding the independence, integrity and honour of the Supreme Court as an institution is a priority. The judiciary, civil society, legal scholars, retired judges, think tanks and the political class must come together on a common platform to devise a systematic approach in which ad-hocism, favouritism and impunity are kept at arm’s length, through the lawful creation of an arrangement and structure which is fair, impartial, just, constitutional, and safeguards the separation of powers.