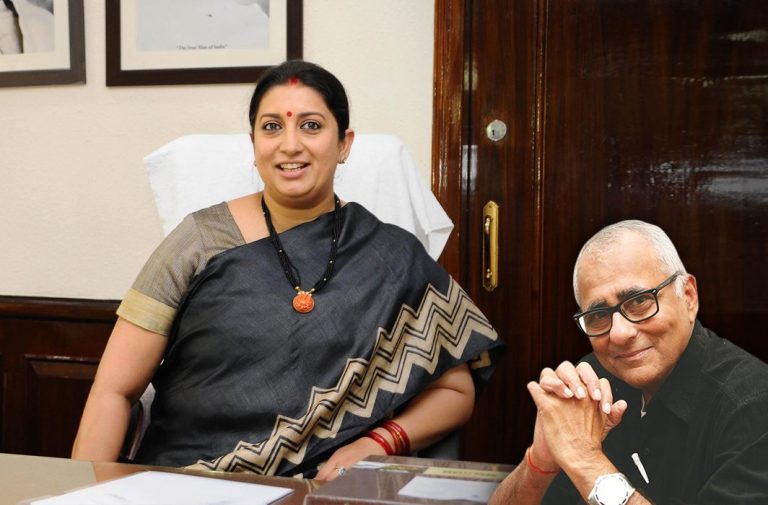 A prominent news website recently quipped that Information and Broadcasting Minister Smriti Irani had most likely failed to remember the meaning of her first name. The word “smriti” means memory. And had Irani put her powers of recall to full use she would probably have thought twice before issuing her ill-fated order which was directed against accredited journalists for disseminating “fake news”. As hastily withdrawn, at the prime minister’s intervention, as it was issued, the Smriti Diktat would punish journalists on the basis of mere allegations of  “fake news” through withdrawal of their accreditation—a government-issued badge that allows them access to officialdom.

This thinly veiled attempt to gag the media was the second time in less than a year that the ruling BJP’s mandarins were forced to backtrack under a barrage of protests. Had Irani forgotten so soon how a similar, perhaps more draconian, attempt by Rajasthan Chief Minister Vasundhara Raje to muzzle the press through an ordinance which would have punished the reporting of corruption charges against government officials had bitten the dust?

Actually, the Modi government is not very different from others, in India as well as across the world, in trying to scuttle press freedom by attacking it from public pulpits, trying to curb it through the law, buying out powerful news organizations or intimidating owners and reporters. In the worst case scenario (as an investigative report in this issue shows), reporters who doggedly expose unpleasant truths are simply murdered. Gauri Lankesh’s daylight extermination at her own doorstep is only one of many such examples.

Actually, India is now ranked 136 on the latest World Press Freedom Index. It is placed in the “difficult situation” slot, with nations like Pakistan and Afghanistan. “With Hindu nationalists trying to purge all manifestations of anti-national thought from the national debate, self-censorship is growing in the mainstream media. Journalists are increasingly the targets of online smear campaigns by the most radical nationalists, who vilify them and even threaten physical reprisals,” the report said.

The watchdog’s analysis also found that prosecutions were used to “gag journalists overly critical of the government”, including the use of the sedition law that comes with life imprisonment as punishment.

Irani’s record in dealing with the press is not exactly an envious one if we use this international standard. In March 2016, an official forensic report found that Shilpi Tiwari, an aide close to her, had peddled doctored videos of JNU students allegedly mouthing anti-national slogans. More recently, a senior journalist who courted controversy for running provocatively sensitive fake news about the Hindu-Muslim clashes in Kasganj, UP, was Irani’s choice for a plum job at Prasar Bharati.

Why do people in power suspend their memory when it comes to throttling the press? Because they really believe they can get away with it. But in a country with a strong Constitution and a functioning democracy, it is not as easy as it sounds. In India, freedom of speech is guaranteed under Article 19(1) (a) of the Constitution of India. Apart from this, provisions relating to freedom of speech are also contained in various international conventions like the Universal Declaration of Human Rights (UDHR), European Convention on Human Rights and the International Covenant on Civil and Political Rights.

The Indian experience shows how most attempts at curbing this freedom have simply not succeeded. Raje and Irani are not the only ones who have tried and failed. Prime Minister Indira Gandhi, perhaps the most powerful leader India ever had, was to face a bitter consequence of censoring the media during the Emergency.

Her Information Minister Vidya Charan Shukla and his army of censors ensured that nothing adverse to the Emergency, which had suspended democracy and jailed the opposition, should appear anywhere. What replaced truthful and free reporting was the fake news that the steps taken during this period—among them sterilization of males, suspension of habeas corpus, arbitrary arrests, rigid discipline and slum clearance, re-forestation—were wildly popular.

Believing the universal government-sponsored fake news that she was riding a tidal wave of popularity, she ordered elections to be held. She was swept out of office. In the absence of alternative, free reporting, she had become a victim of her own propaganda spin doctors. Even while most newspapers and their owners crawled before her, the public remained ever conscious of its rights. Having tasted the ballot and the freedom that goes with it for some two decades, the people were not about to relinquish so easily their fundamental rights.

Smriti Irani is not the only one with a short memory. Jagannath Mishra’s infamous press bill met the same fate as did Jayalalithaa’s, and so did the draconian defamation bill of Mrs Gandhi’s son, Rajiv in the 1980s.

There is no gainsaying that fake news is a huge problem. It always has been and its most ardent purveyors are governments, whether they are authoritarian or liberal. Dissemination of information is distorted through layers of bureaucratic prisms. It is the reporter’s duty to catch the real news and report it fairly before this prismatic distortion is allowed to occur.

George Orwell saw this with rare clarity in his dystopian novel 1984. The most important government department was the Ministry of Truth whose only purpose was to spread lies about an imaginary war in order to manufacture “nationalism” and loyalty to Big Brother, the ruler. It was also assigned the task of controlling history (“if you control the past you control the present”) and creating a new language called Newspeak. This lexicon was designed to corrupt the mind to restrict rather than to broaden ideas.

Thus, freedom became slavery and slavery equalled freedom. Truth became lies (or fake news) and lies became truth. In fact, the other important arm of Big Brother’s government was the Ministry of Plenty whose sole purpose was to continue to spread the word, mostly through the controlled media, that the nation was thriving, when, in fact, there were starvation and shortages.

Big Brother also coined a slogan to describe his vision and hypnotize the public. He called his doctrine “Ingsoc” (short for English Socialism). In real life, Stalin beguiled his masses with “proletarian power” even as he murdered his own people. Mao’s “little red book” fooled the Chinese with utopian well-being even as millions starved in Henan.

Hitler’s propaganda minister Joseph Goebbels, the master of fake news, used the media to spread lies about the Jews to fan anti-semitism as the leitmotif of the blood-thirsty Third Reich; he also invented false attacks on Germans living in Czechoslovakia and  German outposts by Polish forces in order to justify Hitler’s invasion of those countries.

America, possibly still the freest and most open society in the world, has not been immune to fake news and attempts to control the media. President Trump, known to be a habitual, shameless and congenital liar, calls the media “the real enemies of the American people”.  Spiro Agnew, President Nixon’s vice president, who had to resign in disgrace, called the press “the nattering nabobs of negativism” when the administration’s policies were under attack.

Fake news billowed out of the Pentagon during the Vietnam in the 1960s and 1970s war trying to make success out of abject failure. Reporters who covered the daily evening military briefing in Saigon dubbed this the “Five O’Clock Follies” because they knew they were being lied to about body counts and ground realities. Richard Pyle, Associated Press Saigon bureau chief during the war, described the briefings as “the longest-playing tragicomedy in Southeast Asia’s theater of the absurd”.

Ingsoc, and the Communist and fascist slogans were by no means unique. Slogans have an immediate effect because they package the fake identity and personality of a regime into a dream line.  Trump’s “America First” is catchy and cleverly concocted by a man who actually puts himself and his family interests ahead of America. India, too has its slogans, catchy but meaningless in the end: “Garibi Hatao”; “Social Justice”; “Acche Din”. Slogans have a shelf life because most of them turn out to be fake, and the public ultimately sees through them. But in order to propagate them, leaders and politicians need to control or prevent the media from exposing their hollowness.

Ultimately, the fight against fake news and propaganda lies in the hands of fearless journalists. Even during the most tyrannical control over freedom of expression when fascists were ruling Europe and dictators were running Iron Curtain countries, the regimes feared small underground pamphleteers and broadcasts and free thinkers and poets as the greatest threat to their hegemony.

The American press, individuals and proprietors and editors, has fought back relentlessly and without flinching through endless vicissitudes, and remains free, today taking on Trump’s mighty machine blow for blow. In India, the fight against control and exposes of fake news has been waged mostly by a handful of web portal and social media chat rooms.

The opposition is formidable. The troll wehrmacht is fearsome. But somehow, in this diverse land with a savvy young and IT-literate population, the truth seeps out. Fake news like a recent item purveyed by Postcard News about a Jain monk been beaten up by minority assailants in Karnataka, can create a violent reaction. But the attempt failed only because it was effectively countered by unassailable evidence to the contrary by Alt News which is now becoming a fightback model for combating trolls and government propaganda.

Research, vigilance and a commitment to professional standards of reporting can be a powerful weapon against control and intimidation. Finally, mainline media houses, many of them somnolent for the last three years, are waking up to the importance of their own independence. The strongly worded letters written by the Editors Guild and the Indian Newspapers Association to the government opposing the Irani diktat and questioning the re-constitution of the Press Council and the Accreditations Committee are new straws in the wind that have started blowing. Ultimately, the Press has to stand up for itself, or nobody else will.

The good thing is that India is not yet a dictatorship, nor Stalin’s Russia nor the Weimar Republic and there are enough brave people around with access to alternative media tools to defend the powerful Constitution gifted to us by the founding fathers. They were fearless and matchless. They gifted us a Republic. Let us keep it.