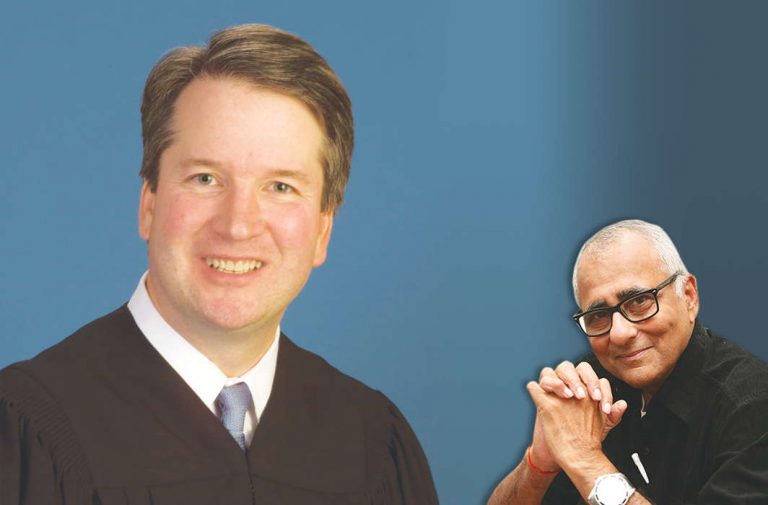 Perhaps the most powerful and gripping legal story of this decade was the confirmation of Judge Brett Kavanaugh as the ninth Justice of the Supreme Court of the United States. And perhaps India can take a chapter out of that because it goes to the very heart of the neutrality and independence of the judiciary stemming from the process by which vacancies are filled in the apex court.

The mainstay of the American constitutional arrangement, which guarantees the continuance of that nation as a Republic gifted to the people by the Founding Fathers, is the system of checks and balances in which the Executive, the Legislature and the Judiciary are equal branches of the government with well-defined powers. There is, however, a necessary tilt towards the Judiciary, notably the Supreme Court, to empower it to play the role of an impartial arbiter in matters of constitutional propriety, especially when the balance of power stands threatened or the Executive branch runs amok or fundamental rights are under threat.

But here’s the great irony and mystery of the American system. The Judiciary is openly and brazenly politicised by the nation’s own laws! At the lower levels of the system, judges actually campaign for and are elected through the ballot to hold office. Supreme Court judges are hand-picked by the president in consultation with his party, and then confirmed by the Senate before being sworn in. Under this process, the Senate Judiciary Committee (something like India’s select committees of Parliament), following extensive background checks by law enforcement agencies of the nominees selected by the president, subjects the candidate to an extensive public grilling before deciding to send the president’s recommendation to the full Senate for a confirmation vote. Thereafter, political and party affiliations and ideologies are supposed to be jettisoned by the new Justice.

If the Senate fails to confirm the nominee, the president must select someone else and go through the whole process again. This procedure is called advice and consent. And the reason for this cumbersome ordeal is that Supreme Court Justices serve their term for their entire lives. There is no retirement. Kavanaugh, who is 53 years old, could well serve for the next 30 years, or even more, considering that three of the sitting Justices (of the total of nine since Kavanaugh’s induction) are between the ages of 70 and 85 years.

While most of the world’s attention was riveted on the emotive #MeToo testimony of Dr Christine Ford who publicly recounted her ordeal of attempted rape by Kavanaugh 35 years ago—an accusation he denied under penalty of perjury—the political undercurrents of his Senate testimony and his rulings and observations as a sitting judge of the Circuit Court were equally worrisome to observers who sense a danger to American jurisprudence.

What was shocking was Kavanaugh’s brazen, unprecedented and unapologetic display of political partisanship as he repudiated Dr Ford’s charges. He called them a part of a Left-wing conspiracy by Democrats, a “hoax”, an act of revenge by pro-Hillary Clinton forces who could not stomach the victory of Trump in 2016, a “search and destroy” mission. It was galling to see these very words and phrases used by Donald Trump, and Republican members of the Senate Judiciary Committee in defence of Kavanaugh. In fact, the dress rehearsal and common script for this rebuttal had actually taken place two days earlier in the West Wing of the White House where Judge Kavanaugh huddled with White House staffers.

A sitting judge of the Circuit Court was actively confabulating and conspiring on strategy and language and attitude with the Republicans and the White House and then unleashing an anti-Democratic tirade, using buzzwords like “left radicals” in a concerted attempt to reach out to Trump’s hardline “base” supporters on the eve of the mid-term elections to the House and Senate. And he was using the Senate hearings, broadcast nationwide, as a platform to vent his political rant. He was actually making a campaign speech for Trump.

That, in itself, should have been a disqualifier. But Kavanaugh squeaked through the Senate vote 48 against, 50 for. Today, he is Justice for life, giving Republicans for the first time a majority in the Supreme Court. This was one of Trump’s cardinal campaign promises to his far right Republican support base—to convert the liberal-leaning Supreme Court into a bastion of resistance to broad-minded and free-thinking social and political initiatives. The Supreme Court, since the days of Franklin D Roosevelt, has been a prime mover on issues such as civil and individual rights and abuse of Executive authority.

Because the Senate’s conservative Republican majority did not allow former President Barack Obama’s nominee for the Supreme Court to come before the Senate for confirmation proceedings (the majority leader can block this process), a vacancy remained unfilled and the Court’s strength had remained at eight. This created a 4-4 stand-off between liberal and conservative judges on major issues they had to adjudicate. With Kavanaugh now on-board, Trump and the Republicans not only have their 5-4 majority on burning social issues but also a political realignment which may help the president overcome the heat he is facing from various investigations into his finances as well as criminal collusion with Russia to influence the 2016 presidential campaign in his favour.

Trump’s base buys heavily into the president’s determination to dilute Roe vs Wade, a landmark ruling giving women abortion rights, as well as a slew of issues such as loosening environmental controls, more draconian anti-immigration laws, diluting climate change regulations and affirmative action plans for minorities and opening up protected areas for mining. Most of these issues will wind up in the Supreme Court.

Equally troublesome are Kavanaugh’s views on Executive privilege, his belief in a stronger presidency which is virtually unaccountable and beyond prosecution for crimes and corruption. He once openly espoused the view that a president can declare as unconstitutional any law passed by the Congress and subsequently upheld by the Supreme Court. While he waffled on this subject when questioned closely during his confirmation hearings, it is clear that Kavanaugh would most likely support the president’s right to withhold subpoenaed information needed by Special Counsel Bob Mueller who has already nailed and convicted some of Trump’s top business associates and political advisers in the course of his investigation.

This would reverse the Supreme Court ruling which helped oust President Richard Nixon in the Watergate scandal. Briefly, the Watergate outrage was the abuse of Executive authority by the president, and his complicity in obstructing justice. The proof of this lay in tape recordings in possession of the White House. Nixon and his team refused to turn over the tapes to the Special Prosecutor, Leon Jaworski. Nixon invoked the theory of “Executive privilege” which, his lawyers argued, gave him the power to withhold sensitive information, such as the tapes from other government branches to maintain confidential communications within the Executive branch and to secure the national interest.

On July 24, 1974, a unanimous Court (with Justice Rehnquist not taking part due to a prior role in the Nixon administration) ruled against the president. Chief Justice Warren Burger said that the president didn’t have an absolute, unqualified privilege to withhold information.

“We conclude that when the ground for asserting privilege as to subpoenaed materials sought for use in a criminal trial is based only on the generalized interest in confidentiality, it cannot prevail over the fundamental demands of due process of law in the fair administration of criminal justice. The generalized assertion of privilege must yield to the demonstrated, specific need for evidence in a pending criminal trial,” Burger said.

The evidence on the tapes, a public account of that period states, “was critical to the impending House impeachment proceedings against Nixon”. The Court ordered the tapes released as soon as possible after a judge had listened to them to decide whether they were relevant to the trial of the former Nixon aides. About two weeks after the Supreme Court’s decision, President Nixon resigned from office.

Trump has been testing, once again, the limits of “Executive privilege” and even abusing it, starting with the firing of FBI director James Comey for not heeding the president’s advice on going easy on the Russiagate probe, and now threatening to sack Deputy Attorney General Rod Rosenstein who is in charge of the probe. His former campaign chairman and pro-Russian lobbyist Paul Manafort has already been indicted, and he along with Trump’s chief financial officer and personal attorney Richard Cohen are cooperating with the Mueller team as approvers in return for possible promises of lighter prison sentences for crimes involving money laundering.

Kavanaugh has indicated that the State cannot indict a sitting president, and appears to support Trump’s own conviction that a president can pardon himself if impeached by Congress. Trump and his supporters, and Kavanaugh is among them because he is clearly indebted to Trump, believe that a president can only be removed by the electorate and not by any other administrative process. Impeachment by Congress is only a possibility if the Democrats get majorities in the legislature during the November mid-term elections. But for impeachment proceedings, they would have to rely on documents, as in the Nixon case, which Trump will refuse to turn over.

And the showdown could well end up in the politicised Supreme Court which now has a 5-4 majority likely to back the president’s assertion of Executive privilege. If this scenario holds, the American constitutional order would take a somersault and pave the way for an Imperial Presidency. That is the real constitutional crisis facing America. That is what the Kavanaugh battle was all about. The American Revolution of 1776 in which 13 American colonies declared their independence from the King of Britain created, later, a system in which the absolute power of the monarch would be restrained by the chains of the Constitution. Trump and his base find this inconvenient because it can derail the Reich of Trump which came to power through dog whistles of white supremacy, the reaction against immigrants and the rejection of the world order created by Presidents Woodrow Wilson, Franklin Roosevelt, Harry Truman and John F Kennedy.

Trump is the glue that holds this force together. Dislodging him, even through Congress, will need the wise interplay of the Supreme Court. But the American system of the Executive being allowed to place brazenly political appointees as Justices may come back to haunt it. There may be a lesson in this for India. The Indian Executive’s attempt to create the National Judicial Appointments Commission (NJAC) would have infused the process with politics. Kavanaugh is a bald-faced example of what happens when a political judge is chosen through Executive power. Maybe the NJAC was a bad idea after all, and the Indian Supreme Court was sensible to reject it.