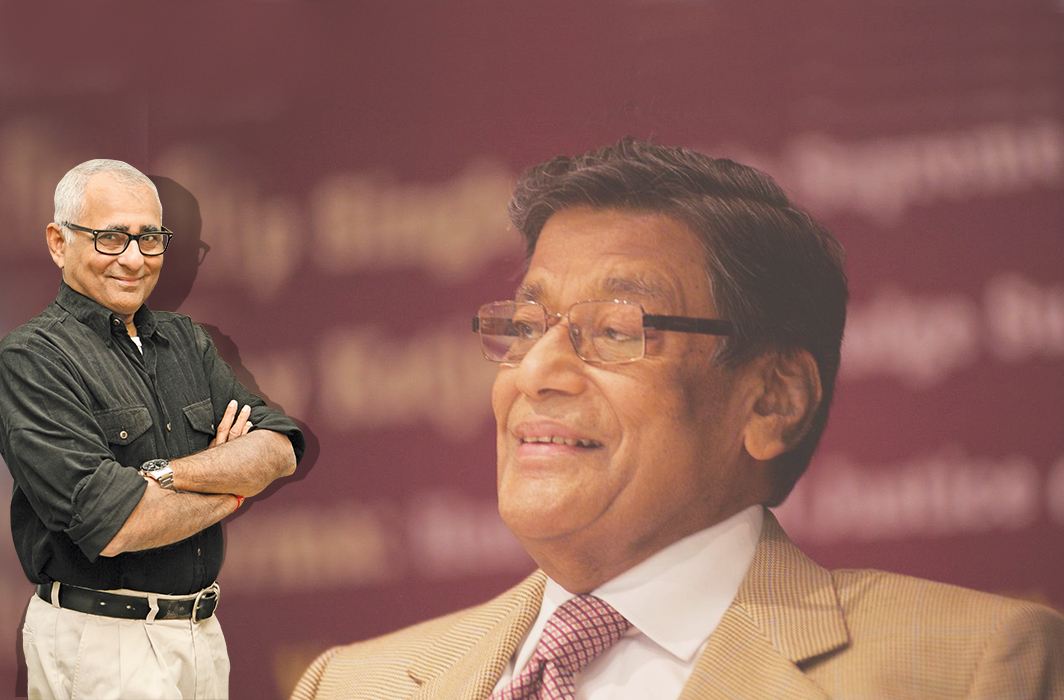 Above: KK Venugopal, who takes over from Mukul Rohatgi, will also have to resolve several questions regarding a code of ethics for the AG’s office. Photo: Nikhil Kanekal/Wikimedia

Now that the suave octogenarian KK Venugopal (known to his colleagues as “KKV”) is in the attorney general’s saddle, a reflection on this transition merits attention. His predecessor, Mukul Rohatgi, the incumbent for three years, is an interesting man.

I do not know Rohatgi personally even though we have met professionally. My first impression of him was that of a pleasant but intensely driven personality. In 2004, he forcefully argued a case against an organisation I represented in the Delhi High Court and won hands down. He received my grudging respect—I wished he had been on my side.

My next, albeit indirect, encounter with him was in July 2015 when, again, I was compelled to admire his professionalism. We had received word that he was representing a private party in India’s apex court. Intrigued by the ethics of the situation, I couriered Rohatgi the following letter in my capacity as editor of this magazine:

“We would appreciate your clarifying and answering some questions that have been raised and brought to my attention by some of our correspondents regarding your representation of a Kerala-based liquor businessman. Considering your eminence and the high personal regard in which I hold you, I thought it best to write to you myself.

“Q.2. Because of pending matters to which you had to attend, was this item shifted to No. 27 on the roster?

“Q.3. As attorney general, do you think it is ethical, proper, or administratively correct for a person holding your position to appear on behalf of a private client against the state government of Kerala?

“Q.4. In your opinion would this not be considered a conflict of interest?

“Q.5. How many other private clients have you appeared for since your appointment as Attorney General by the new government on June 19, 2014?

“Q.6. Did you at any time seek the approval of the Law Ministry before making your appearance in this particular or similar cases?

“Q.7. How long have you represented this particular client?

“Q.8. Were your lawyer fees paid by cheque or cash?

“Q.9. Have you appeared in any cases representing private clients against the Union of India or any state governments and/or their undertakings?

“I would be grateful for your response to these questions at the earliest.”

Given the attitude of total disregard by government officials for sharing information with the public and the press, I really did not expect any answer. But to my pleasant surprise, Rohatgi responded within a couple of days. He prefaced his letter by saying that he was under no obligation or compulsions to answer any of my questions but was doing so in the interests of openness and because there was no impropriety involved. In summary, he reiterated that the attorney general cannot appear against the government. Nor can he defend an accused in criminal proceedings or accept the directorship of a company without government approval. There’s no administrative restriction on an attorney general from accepting a no-government brief, but he has to seek prior permission of the Union law ministry to defend a commercial client.

I wrote back to him expressing my deep appreciation for his respect for the press and for upholding the concept of accountability. I meant that. He had stood out in what are admittedly not the best of times for the press, whose written queries to high officials are either confined to the dustbin or met with threats of retaliation.

The matter did create a stink, however, when Kerala Chief Minister Oommen Chandy publicly berated Rohatgi for appearing for a private party in a matter of public policy on alcohol consumption.

So what does all this have to do with KKV’s appointment? Plenty. Because KKV will be saddled with several residual ethical dilemmas. Rohatgi may have played by the book. But the larger issue, which goes beyond Rohatgi’s personal probity, is whether or not there should be a code of ethics for AGs and whether Rohatgi, who is demitting office, would now support such a code? Or whether KKV, in his private avatar, backed this cause. After all, the AG is the administration’s chief legal advisor and its principal lawyer in the Supreme Court. He is appointed by the President of India under Article 76(1) of the constitution and holds office during the pleasure of the president. He must be qualified to be appointed as a judge of the Supreme Court. Should a person of this constitutional stature appear for a private party against the state government?

In fact, after he became India’s 14th attorney general, Rohatgi had stated that he would debar himself from cases and clients he represented in private practice. He did, indeed, remove himself from the 2G spectrum allocation case in which he had once represented some of the companies under investigation. Actually, the first AG to openly represent a private party was LN Sinha who served as AG during Mrs Indira Gandhi’s tenure from 1979 to 1983.

But this is not the only issue which will remain unresolved. KKV, as he is called, is a venerable constitutional pundit, son of the legendary lawyer, MK Nambiar, who litigated the iconic AK Gopalan vs State of Madras civil liberties case. KKV has made a career defending civil and constitutional rights, among them the Puducherry assembly speaker election case; Karunanidhi ministry’s dismissal case (1976); the Babri Masjid case; and as amicus curiae (friend of the court) in the 2G Spectrum scam. He pleaded with the Supreme Court to delay implementation of the Mandal Commission to try and curb student violence. He has helped Nepal and Bhutan draft their respective constitutions.

He has been an activist for judicial reforms, a critic of pendency, a supporter of the concept of setting up final courts of appeal in four metros, and served as amicus curiae to assist the Supreme Court in examining whether conduct of the All India Bar Examination (AIBE) was a violation of the fundamental right to practise a profession. The list is endless. 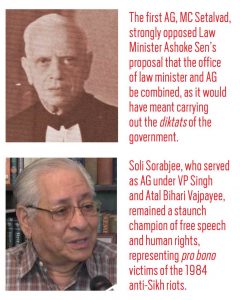 Apart from the conflict of interest issues involved in representing private clients, a vexing debate has raged over the independence of the institution of the AG. Prime Minister Narendra Modi demands total loyalty. Did he obtain it from Rohatgi and will he receive it from the future AG? In some ways, Rohatgi spoke the administration’s language on Aadhaar, human rights issues in Kashmir, triple talaq and demonetisation. But not all his associates are fully convinced that Rohatgi put his heart and soul into all these matters even though he argued with full professionalism. The Uttarakhand fiasco when the Supreme Court overturned President’s Rule in 2016 was a reversal for him. His political enemies, particularly gadfly Subramanian Swamy, had a field day ridiculing him publicly. With more contentious matters such as the cattle trade ban, PILs against human rights violations, EVM controversies and demonetisation still hanging in the air, Rohatgi may not have had the stomach to litigate with his heart. People who know him say he would like to leave these matters to the next in line and choose the cases he wants in private practice.

Actually, the assault on the constitutional independence of the AG began in Prime Minister Nehru’s time when Law Minister Ashoke Sen proposed in a report, supported by Nehru, that the office of law minister and AG be combined so that the ministry would not be hampered in carrying out the legal diktats of the government. There were howls of protest from the law profession, and mostly from MC Setalvad, India’s first AG, who often differed with Nehru and Sen and jealously guarded his independence and integrity.

The proposal was never passed but the independence of the AG depended, usually, on its occupant and the government’s respect for constitutionality. AG Niren De shocked the nation during the Emergency when he brazenly told the Supreme Court that the right to life under Article 21 could be suspended or abolished under the proclamation. Politicisation of AG decisions has been a regular feature. Some examples from the record: In 2005 when the UPA government was trying to ally with UP’s Dalit Queen Mayawati, AG Milon Banerjee issued an opinion clearing her in the Taj Corridor Case, but was snubbed by the Supreme Court. Similarly, Banerjee’s opinion in 2009 absolving Bofors-accused Ottavio Quattrochi came in for widespread criticism.

The performance of Attorney General Goolam Vahanvati was questioned in the 2G spectrum case where he was forced to testify as a witness in a trial court as well as in 2013 in Coalgate when he was accused of misrepresenting facts.

While many of the AGs remained low-key or non-controversial, others like CK Daphtary (1963-1968) and Soli Sorabjee who served first under VP Singh and then under Atal Bihari Vajpayee, created legends for themselves because of their wit, scholarship and integrity. Sorabjee remained a staunch champion of free speech and human rights, representing pro bono victims of the anti-Sikh riots. Daphtary, who was known to love the good times but never let this interfere with his professional career, made famous these lines when Morarji Desai introduced liquor prohibition in Maharashtra: “A Republic without a PUB is a mere RELIC”

As KKV takes over, ambiguity marks the outcome of the cases still in court to which the government is a party. And as our cover story says, many of these are cases that could reshape the Indian narrative. One thing is for sure. The new attorney general will be in the hot seat. Will he simply do what he is asked or will he be another Setalvad or Sorabjee? Or will Modi find a via media and limit him as a figurehead to advise only on constitutional matters, while leaving the more juicy cases to the solicitor general and additional solicitor generals?

These are the million-dollar questions.