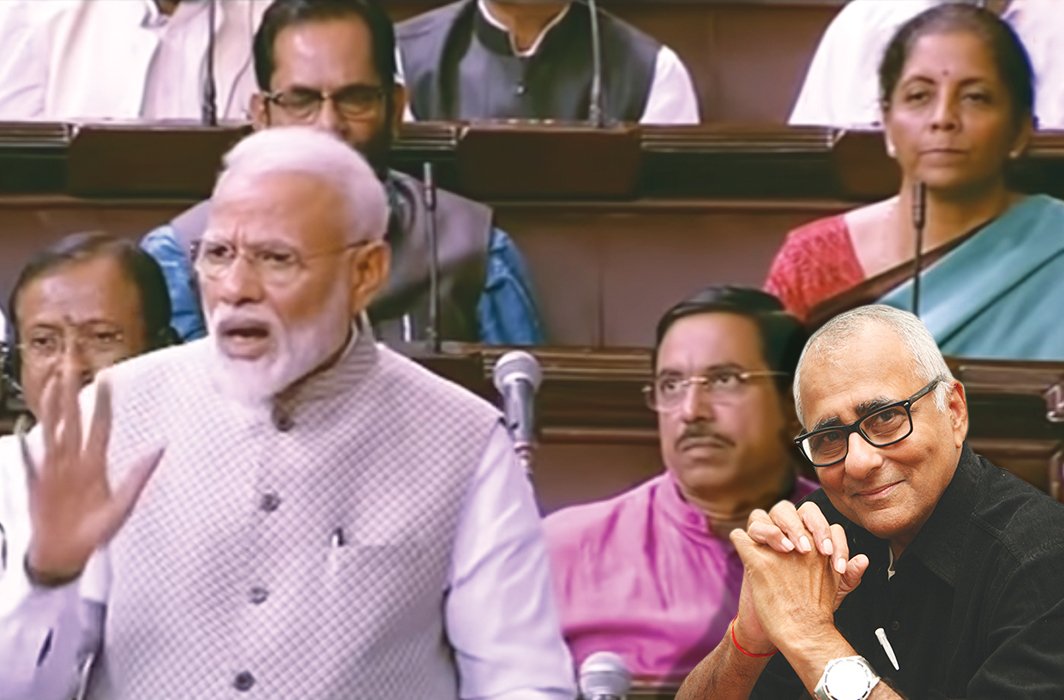 It was heartening to hear Prime Minister Narendra Modi condemn the horrific, damnable lynching in Jharkhand of Tabrez Ansari, a Muslim youth, accused of stealing a motorcycle. A video shows him being bludgeoned by a crazed mob while purportedly being made to chant “Jai Shri Ram” and  “Jai Hanuman” in Saraikela Kharsawan district of the state. He later died.

Modi said in Parliament the incident “pained” him. And nobody should doubt the sincerity of the elected leader of all Indians. “It has saddened others too. Guilty should get severest punishment but for this the entire state has been pronounced guilty and everyone put in dock, which is not right,” he added.

The caveat was perhaps unnecessary. It sounded a little like Punjab Congress leader Navjot Sidhu saying the state of Pakistan should not be blamed for violent acts by individual terrorist groups, such as the Pulwama suicide bombing, against India. Sidhu was roasted for his comments by opponents who argued that all such acts were, in fact, an outcome of the anti-India hatred fuelled and nurtured by Pakistani governments as an instrument of state policy.

Modi, I am sure, was speaking for the majority of peace-loving, non-violent, secular-minded people of Jharkhand, and all Indians should pay heed to the sentiment he expressed in Parliament. Just as all Indians should take seriously the prime minister’s condemnation of newly-elected MP Pragya Thakur, a terror undertrial, whom he said he would “never forgive” for eulogising the murderer of Mahatma Gandhi.

It is for this reason that recent reports on the human rights situation in India submitted to the United Nations should be taken with more than just a grain of salt. If the prime minister has himself expressed such personal anguish in public, then reports accusing leaders of the Bharatiya Janata Party (BJP) of making “inflammatory remarks” against minority groups and contributing to “vigilantism targeted against Muslims and Dalits” assume significance.

One recent report was prepared by Tendayi Achiume, a United Nations special rapporteur on contemporary forms of racism, racial discrimination, xenophobia and related intolerance. This post is held by an independent human rights expert appointed by the UN Human Rights Council.

The ministry of external affairs denounced the report as “fallacious, tendentious and motivated”. The Indian government called it a selective compilation of largely unverified information to build a false narrative. But this is not the first time that Jharkhand’s name has figured in connection with these atrocities. The international Human Rights Watch (HRW) compiled a separate report last year in which Jharkhand features on the first page of this disturbing document: In March 18, 2016, a group of men murdered two Muslim cattle herders who were on their way to sell bulls at an animal fair in India’s Jharkhand state. The attackers, all linked to a local “cow protection” group, accused Mohammed Mazlum Ansari, 35, and Imteyaz Khan, 12, of selling the cattle for slaughter, then beat them to death and hanged their bodies from a tree. Imteyaz’s father, Azad Khan, said he watched helplessly as the attack took place: “I hid in the bushes when I saw them beating up Imteyaz and Mazlum. If I had stepped out, they would have killed me too. My son was screaming for help, but I was so scared.”

The report said that members of the BJP, since coming to power at the national level in May 2014, have increasingly used communal rhetoric that has spurred a violent vigilante campaign against beef consumption and those deemed linked to it. Between May 2015 and December 2018, at least 44 people—36 of them Muslims—were killed across 12 Indian states. Over that same period, around 280 people were injured in over 100 different incidents across 20 states.

In almost all of the cases, in the words of the HRW report, the police initially stalled investigations, ignored procedures, or even played a complicit role in the killings and cover-up of crimes. Instead of promptly investigating and arresting suspects, the police filed complaints against victims, their families and witnesses under laws that ban cow slaughter. In several cases, political leaders of Hindu nationalist groups, including elected BJP officials, defended the assaults. In a particularly egregious case of political opportunism, after two people including a police officer were killed in mob violence in December 2018 in Uttar Pradesh, the chief minister described the incident as an “accident”, and then went on to warn: “Illegal slaughtering, and not just cow slaughter, is banned in the entire state.”

In the most recent development, Madhya Pradesh became the first state to initiate a law to make cow vigilantism a punishable offence. The state proposed a jail term ranging from six months to three years for those who engage in violence against anyone charged under the anti-cow slaughter act. Incidentally, this law comes a month after three Muslim youth, including a woman, were beaten by gau rakshaks over rumours of carrying beef in Seoni, Madhya Pradesh.

Under the chief ministership of Kamal Nath, the state is the first to comply with a series of directives for “preventive, remedial and punitive” measures to address “lynching”. Under former Chief Justice Dipak Misra, the Supreme Court in July 2018 had described cow vigilantism and other forms of lynching as “horrendous acts of mobocracy” and recommended that Parliament and state governments enact specific laws to prevent these crimes and punish the offenders. The Court reminded the offenders and their protectors: “It is imperative for them to remember that they are subservient to the law and cannot be guided by notions or emotions or sentiments or, for that matter, faith.”

In consonance with Prime Minister Modi’s recent statement in Parliament, the new law being enacted in Madhya Pradesh and in the light of the Supreme Court’s verdict against cow vigilante groups, India Legal has been canvassing for a strong mechanism to deal with vigilante groups and make the State accountable and responsible for dealing with such hate crimes.

To give the reader a flavour of the judgment, summarised below are the main points made by former Chief Justice Misra which should be made must reading for anybody interested in reforming a nation going horribly offtrack from the core moral centre of its Founding Fathers: