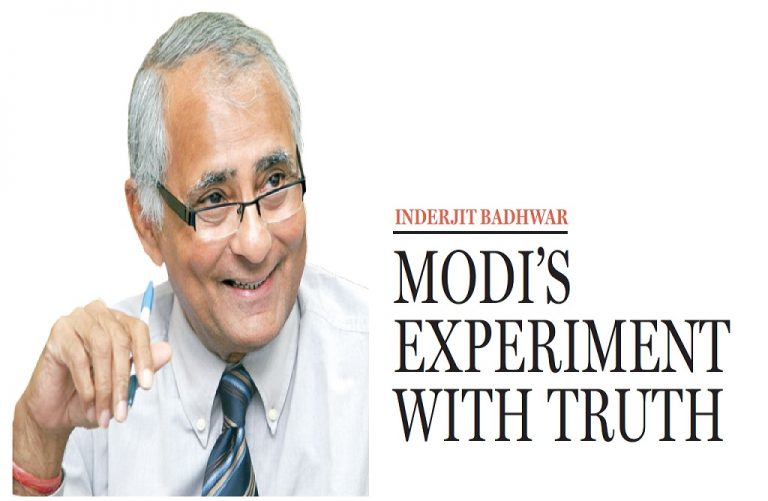 I have just returned from a 600-km reportorial road trip, accompanied by a camera crew from India Legal’s sister concern, APN NEWS, after covering a part of UP’s Rohilkhand area which starts unrolling from Delhi’s suburban Ghaziabad and stretches through Bulandshahr, Narora, Gunnaur, Sahaswan, Badaun, Bilsi, Bareilly, Moradabad, Rampur…well, you can see it on the map.

I have covered famines and droughts in Bihar and eastern UP since I was a cub reporter and I know rural distress when I see it. I do not exaggerate when I report today—as I have done for a documentary for APN—that the government’s demonetization has virtually drained the economic bloodline of this region, reducing it to a grim shadow of its former relatively prosperous self.

To change the metaphor: You don’t need to be an expert or an economist to understand that when you empty a cash-based economy of the cash which oxygenates it and have no back-up ventilators, its lungs collapse. Rohilkhand—and reports from most regions of India seem to suggest similar distress—is gasping for breath.

The rabi crop sowing season, mostly wheat, is behind schedule for want of diesel for irrigation and fertilizer. Rural liquidity, on which market towns bustle and flourish, is kaput. Potatoes and tomatoes are rotting in mandis even as villagers have no cash to purchase them.

Migrant labor which sent back earnings to their villages from larger towns are returning home empty-handed and jobless and scrounging on the savings of relatives and older parents. Real estate and land transactions have collapsed along with consumer spending. Weavers and artisans are borrowing food because there’s no payday anymore.

Even if one can understand the idea of a cashless economy as a brilliant idea, the idea of cashless banks and ATMs is mind-blowing…. There are not hours but repeated days of waiting in lines which spare neither young nor old….

Paytm and digital transactions are a space-age away. Even if one can understand the idea of a cashless economy as a brilliant idea, the idea of cashless banks and ATMs is mind-blowing. The queues are longer. There are not hours but repeated days of waiting in lines which spare neither young nor old, man or woman, beggar or disabled.

And yet, while the anger escalates and the restiveness mounts… many of these wretched of the earth bear their suffering with stoicism even as they grit their teeth and curse. Increasingly, they are exploding into anti-Modi sloganeering, but there are those who, even as they berate their abject misery, praise Modi for having taken a good decision.

This is an area into which most pundits have feared to tread. But let me hazard an analysis. Leading international economists, among them Bharat Ratna and Nobel Laureate Amartya Sen, Manmohan Singh, Swarajya editor R Jagannathan, Paul Krugman, Prem Shankar Jha and the RSS’s own Swadeshi ideologue, the venerable Govindacharya, have condemned Modi’s move as a disastrous example of self-defeating economic adventurism. So have burgeoning posts on social media.

Government spin doctors, in a bait-and-switch con game, have changed the goalpost from demonetization to digitalization. All may be missing the point. Modi’s opponents cannot fight or defeat him politically, nor his propagandists defend him economically, because his stake is not party politics or economic policies but his own personal religion. It is his own cunning experiment with his own version of the truth, no matter how perverse you may find it.

You don’t need to be an expert or an economist to understand that when you empty a cash-based economy of the cash which oxygenates it and have no back-up ventilators, its lungs collapse.

There’s another home truth about the art of propaganda: The more far-fetched the lie, the greater its credibility. The same holds true for analogies. The current one doing the rounds is the forbearance of the brave Indian jawan standing for days guarding our borders as against the churlish impatience of those having to stand for a few hours in bank queues.

On the face of it, this is an inane non-sequitur. It is like telling a passenger being crushed to death in an overcrowded bus to stop complaining because a brave Indian astronaut is sitting cramped for months in an ISRO spaceship circling the earth.

Modi’s crusade against the Kalyug of Black Money resonates with many Indians with Gandhi’s culture of satyagraha which involves the masses in a ritual of self-sacrifice, a “yagna”… to achieve freedom from oppression.

Actually, here too, the Modium is the Message. The NAMO appeal is subliminal: Since black money funds terror, the common man at home is also a soldier who must suffer the same privation at home as the jawan on the LoC in fighting this common enemy; to complain is, therefore, unpatriotic and anti-national.

Forget the political motives or the macro-economic debate for the moment. This is pure political theatre at its best, aimed at testing Modi’s personal strength and his capability of imposing his writ and will on the nation. The dialog is sprinkled with buzzwords like “renunciation,” “faqir” and “sacrifice”, which have a far greater resonance with ordinary Indians than the macroeconomic arithmetic of “Rs 15  lakh crore vs Rs 5 lakh crore” etcetera.

Modi’s is a clarion call for class warfare, not of the physical kind, but of the psychological genre in which the worker, standing endlessly in queue, is relishing a “revenge” against the fat cat who Modi says stole the common man’s money and impoverished him by stashing it into black cash which he is now being forced to surrender while also being punished for it.

Many of those in queues will beat their chests over what they have been reduced to, yet at the end, repeat “but Modi’s intentions are good,” out of fear of retaliation. Some are paid BJP workers instructed to hog the camera space. Not surprisingly, the most vociferous pro-Modi voices when you turn the camera on them are known black-marketers and merchants. Ask the person in queue whether he sees any of the black money merchants waiting in the lines and the universal answer is an emphatic No, Only The Poor Are Suffering Because The People With Black Money Were Tipped Off By Bankers And Politicians And Have Already Converted Their Loot.

Of course, there’s an irony! The contradictions are obvious! The suffering is for real. The economists, Left and Right, predicting long-term economic chaos may well be right. But in my view, all this is inconsequential to Modi’s theatre. At a political level, it has dramaturgical and symbolic perfection that strikes deeply into the Indian psyche. It is a brilliant pre-modernist idiom which even Guru Golwalkar and the wise men of Nagpur could not master.

In Gandhian idiom, Modi, no matter how colorful his expensive attire, is still the revolutionary “naked faqir” (Gandhi) who destroyed the well-clad Churchill. In religious terms, he is the Buddha-like seeker, the tyagi who left his wife and family and suffered terribly to seek the truth to end Kalyug.

His crusade against the Kalyug of Black Money resonates with many Indians with Gandhi’s culture of satyagraha which involves the masses in a ritual of self-sacrifice, a “yagna” as Modi called it, of self-flagellation, a participation in purification to achieve freedom from oppression. During the Swadeshi Movement against the British, millions of Indians voluntarily burned their British-made garments in public bonfires: As Modi told a recent audience: “I am a faqir. I will sling my jhola on my back and move on…I have nothing to lose.”

The subliminal message is just as you suffered with Gandhi to get rid of slavery under White Raj, you are now suffering with me to get rid of your serfdom to Black Money Raj. As one wise friend observed: “He has people believing in not only a better tomorrow but a more self-righteous tomorrow.” The catch: The time-frame within which the hopes he holds out may be belied is shorter—that is his risk in his private experiment.

So, it’s NOT the economy, stupid! Or will Modi be proved wrong?

Footnote: There is one crucial difference. The masses never saw Gandhi seeking power for himself. His satyagraha was to empower others.

To watch the full coverage go to: