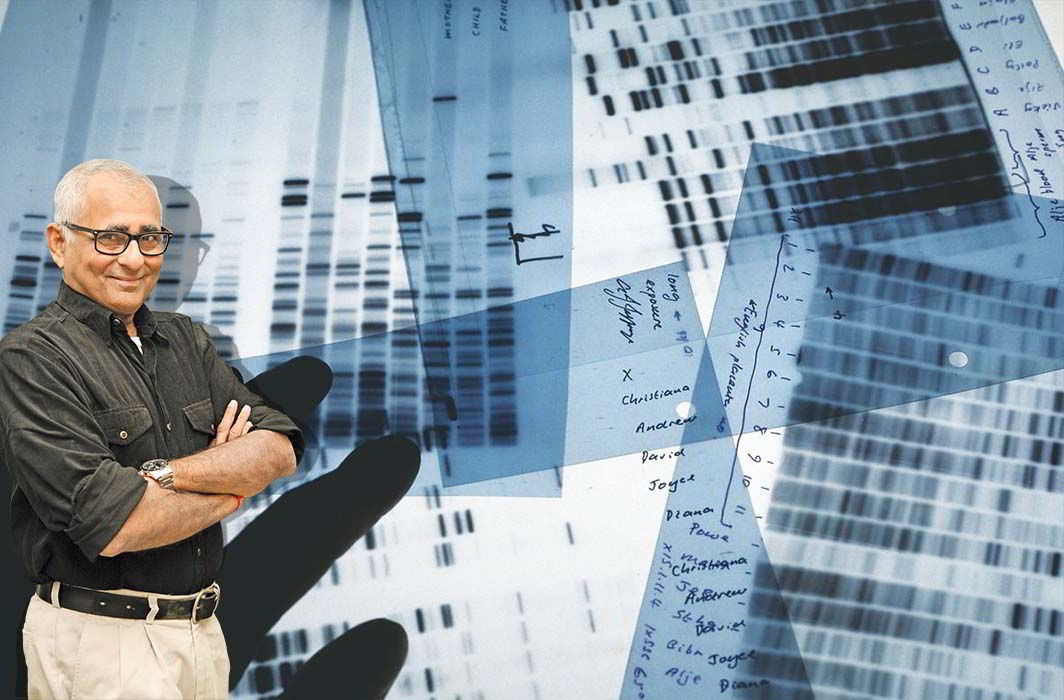 A well-known senior high court judge recently confided that one reason that the Indian judicial system often fails the litmus test of speedy justice and is straddled with an unforgivably huge number of under- trial detenues languishing in jail is the dreadful failure of the police and investigating agencies to adopt modern forensic methods. As our cover story on custodial torture points out, the result is crude, often barbaric interrogation techniques, confessions which are inadmissible in a court of law, manufactured evidence, wrongful convictions, an unpardonable rate of unsolved crimes, and interminable trial delays.

Crime scene “investigations”—the most highly publicised recent one is the Aarushi murder case—are a joke. And yet it appears that nobody cares two hoots about using scientific methods which have been tried and tested the world over. The National Center for Biotechnology Information (NCBI)—an arm of the US government—lists some of these forensic techniques for individualisation—fingerprints, dental impressions, striations on bullets, hair and fibre comparisons, voice spectrograms, neutron-activation analysis, blood-grouping and serum-protein and enzyme typing, as well as DNA profiling. No doubt, says an NCBI research document, “they require an ability to match samples with reasonable accuracy with respect to characteristics that can help to differentiate one source from another.”

But DNA profiling is no rocket science anymore. It has been in use in India for years, and is a part of admissible expert evidence under Section 45 of the Evidence Act, 1872. Unlike a handwriting expert’s opinion during a trial, which may or may not be accepted because it is still considered an art rather than a science, DNA profiling is more clear-cut and totally methodical. In fact, the 271st Law Commission Report strongly recommends wide use of this method to strengthen the Indian criminal justice system.

Yet, India conducts an abysmal number (under 10,000) of DNA tests a year compared to 60,000 in the UK. The conviction rate in violent rapes has also gone down in India from around 50 percent to under 30 percent in the past couple of years. Legal experts and scientists are rightly calling for changes in law to make DNA testing part of the standing operating protocol (SOP) in cases involving rape and violent crimes.

Last week, there was a fascinating seminar on this subject organised by the internationally-renowned Gordon Thomas Honeywell Governmental Affairs (GTH-GA), a public affairs consultancy firm that has expertise with forensic DNA database policy, legislative policy and law.

India conducts an abysmal number of DNA tests a year. The conviction rate in violent rapes has gone down from around 50 percent to under 30 percent in the past couple of years. Changes are required in law to make DNA testing part of the standing operating protocol in rape and violent crime cases

Among the participants at the event organised at the Indian Law Institute were senior lawyers, forensic experts and policy advocates. Said Rupinder Singh Suri, president of the Supreme Court Bar Association of India: “Much-debated, high-profile cases like Aarushi, Nirbhaya, Priyadarshini Mattoo, Jessica Lal clearly bring out existing issues within the Indian judicial criminal system, be it crime scene contamination, the lack of DNA evidence and scientific approach, over-reliance on witnesses in court and circumstantial evidence, they all make the case even more complex and difficult to prove beyond reasonable doubt in court. Not only does this prolong the conviction process but it also puts a lot of pressure on the police, forensic team, investigating authorities, lawyers and the judiciary, impacting the final verdict. What is not sufficiently highlighted in public knowledge though, is that in the absence of proper conviction, the innocent are behind bars, while the guilty continue to roam free. DNA evidence is indeed the world’s best crime fighting technology and India must also therefore fully implement it.”

The law ministry would be well advised to pay heed to the core issues which figured in this seminar: how India compares with other countries in terms of DNA policy framework and its adoption; the regulatory guidelines needed to improve DNA casework and conviction rate; strengthening DNA collection procedures and ways to protect the crime scene; the legal framework for prosecution and defence demanding DNA evidence to argue their cases; infrastructure of forensic labs and the burden of huge backlogs; training for qualified lab technicians and police personnel to collect DNA evidence from the crime scene; and advocacy to make victims and their families aware.

There is no gainsaying that the law and order apparatus, globally, is progressively more reliant on DNA forensics to solve crime, but India is lagging. Says Tim Schellberg, President of GTH-GA: “India needs a more aggressive DNA ‘Collect, Test and Compare’ approach for faster convictions and disposal of cases by courts.”

Dr Durgadas Kasbekar, Senior Scientist at the Indian National Science Academy’s Centre for DNA Fingerprinting and Diagnostics (CDFD), believes that DNA evidence is sufficiently conclusive to solve crime as “only monozygotic twins share the same DNA profile. Different tissues, teeth, bones, blood (a drop is enough), spit, semen detected on cloth using specific staining procedures, skin cells sloughed off with sweat, yield the same DNA profile if they are from the same individual. Therefore, outside of identical twins, no two people have the same DNA pattern.”

Senior Advocate Vivek Sood says that DNA evidence is tantamount to the right to fair investigation and trial: “Fair and competent investigation in a criminal case is the backbone of criminal justice in any society. Collection of DNA evidence is equally important from the perspective of the prosecution as well as the accused. Hence, collection of DNA evidence in appropriate cases can be said to be in compliance with Article 21 of the Constitution of India which guarantees to every person the fundamental right to life and liberty.” 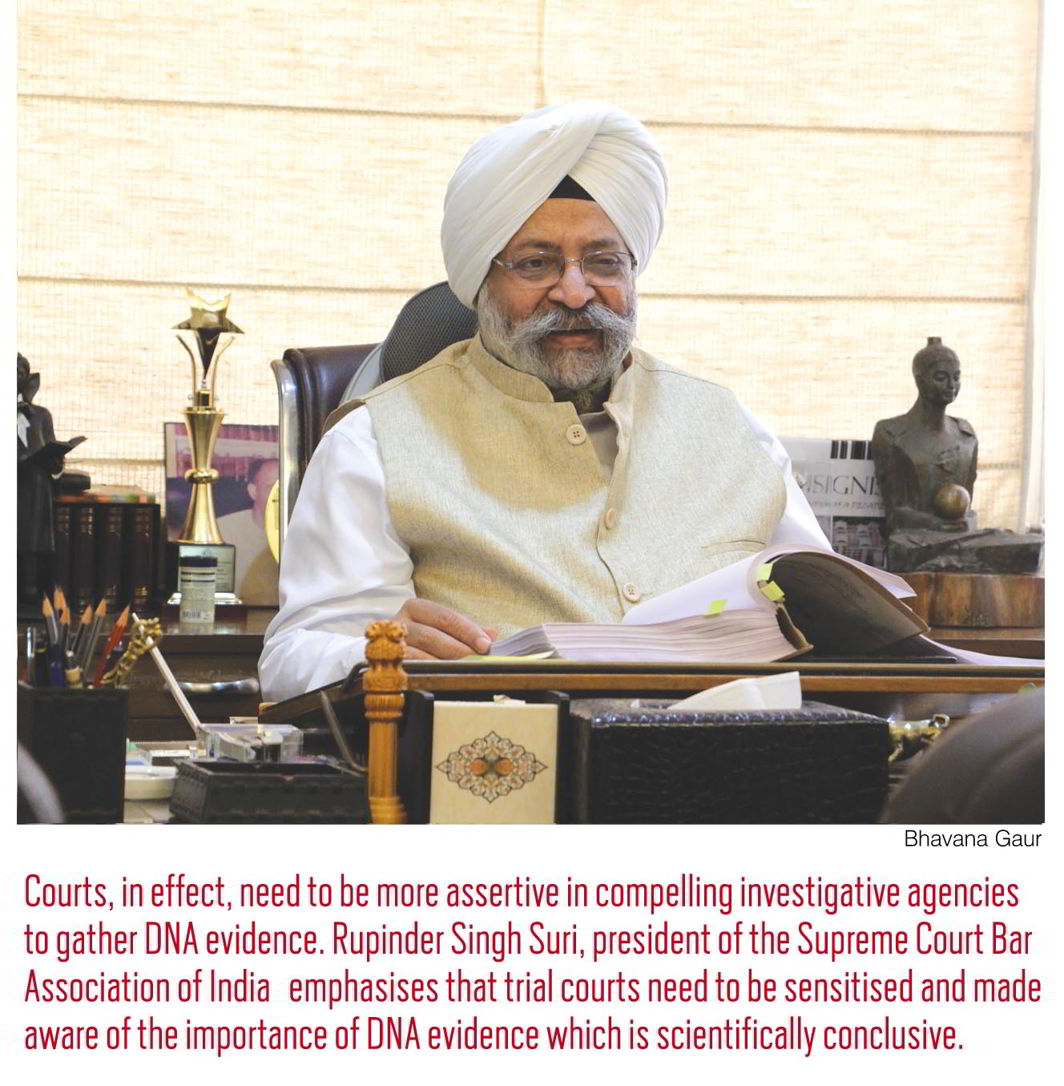 Another Supreme Court lawyer, Ravi Kant, who also participated in the high-profile confab, said that in order to send “a strong message” to perpetrators of crimes and to instil  fear of the law “we have to ensure that evidence collection has to be strengthened.” He emphasised the importance of setting up a DNA Profiling Board as a statutory body ac-cording to the Law Commission recommendation. The Board would establish procedures and standards to set up DNA laboratories and grant accreditation to as well as advise various ministries and departments of the central and state governments.

A critical task assigned to the Board would be to supervise, monitor, inspect and assess the laboratories. The Board would frame guidelines for training. It would also police investigating agencies dealing with DNA-related matters and tutor them on ethical and human rights issues concerning DNA testing in consonance with international guidelines.

While there can be little disagreement on the need for an immediate and aggressive push to spread the use of DNA as a forensic tool, safeguards are of the essence. As an online advisory portal points out: “DNA evidence can be easily contaminated during collection and storage. It can even mix with the DNA of another person and can lose its evidentiary value. Precautions that officers must take are wearing gloves, avoidance of coughing, sneezing, smoking, using objects of scene of crime like glasses for drinking water, prevention of direct sunlight or water on DNA samples, avoidance of the use of paper bags and use of proper bags for proper samples, maintenance of conditions for storage of special samples.”

The Supreme Court has also sounded a cautionary note. In Dharam Deo Yadav vs. State of Uttar Pradesh 2014 (5) SCC 509, a judgment which deals with the admissibility of DNA evidence, the Court observes: “Crime scene has to be scientifically dealt with without any error. In criminal cases specifically based on circumstantial evidence, forensic science plays a pivotal role, which may assist in establishing the evidence of crime, identifying the suspect, ascertaining the guilt or innocence of the accused. One of the major activities of the investigating officer at the crime scene is to make thorough search for potential evidence that have probative value in the crime. Investigating Officer may be guarded against potential contamination of physical evidence which can grow at the crime scene during collection, packing and forwarding. Proper precaution has to be taken to preserve evidence and also against any attempt to tamper with the material or causing any contamination or damage.”