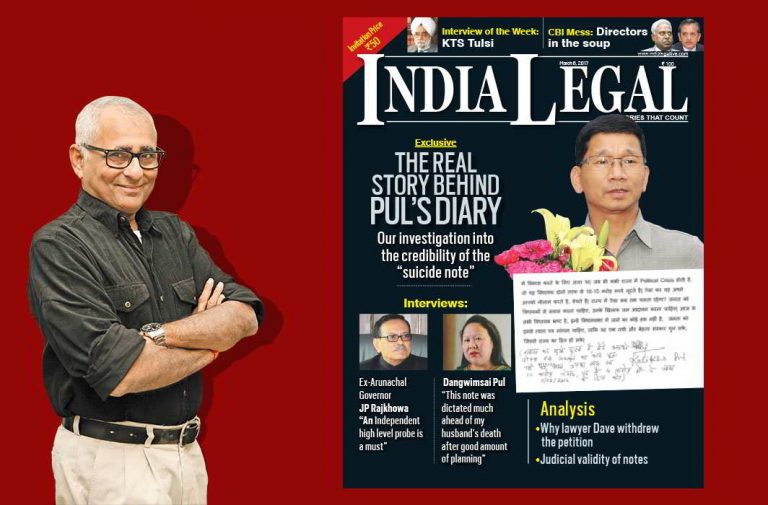 Our current issue yields a bountiful harvest of breaking stories, investigations and penetrating legal analyses of top-of-the mind issues. The cover piece—the continuing saga of the diaries of former Arunachal Chief Minister Kalikho Pul, which were found after his suicide, and have rattled the establishment—was put together by our weekly’s senior team assisted by several junior reporters. It is an eye-catcher. But it also reveals several facets of the story not generally brought out in the mainstream media.

Apart from this important—and sensational—package, the two other stories that engaged my thoughts are “Let the Light In,” written by Justice Sreedhar Rao, and “Down the Memory Hole” by Ajith Pillai. They seem, on the surface, contradictory— one suggesting exposure, the other a hiding place. Actually, both have to do with individual rights, fairness, and the rule of law.

Rao makes a strong pitch for open courts where access to judicial proceedings is in the public domain—an essential element of true and fair trials. He says that transparency in the conduct of judicial proceedings is what gives the system its greatest credibility. This is the practice in the UK which bequeathed the legacy of Roman jurisprudence to its former colony, India.

It is ultimately a legacy of King John’s 1215 Magna Carta, the harbinger of the concept of the open court as against the “judicial arbitrariness and tyranny” of the Star Chamber Courts which were ultimately abolished in 1641, notwithstanding the standards promulgated in 1215.

Justice Sreedhar Rao makes a strong pitch for open courts where access to judicial proceedings is in the public domain—an essential element of true and fair trials. He says that transparency in the conduct of judicial proceedings is what gives the system its greatest credibility. This is the practice in the UK which bequeathed the legacy of Roman jurisprudence to its former colony, India.

In the UK, all proceedings of the Supreme Court and Appeal Court are filmed and broadcast. The US Supreme Court website provides audio recordings of all oral arguments. In fact, most democracies, including Australia and South Africa, have provided access to digital technology.

India lags behind. Rao argues that if access to the executive can be provided through RTI, and to Parliament through video recordings, then why exempt judicial proceedings from the larger public gaze because “justice is not only to be done but seen to be done.” That is a commandment of democratic governance, he forcefully argues.

Pillai’s story extols what he calls a “landmark” judgment which, in effect, shields an individual or groups from public scrutiny. As I said, this might look like a contrarian view to the one expressed by Justice Rao, but it is not really so. It also argues for liberty—but liberty of another kind: the right to privacy.

In the judgment to which he refers, the Karnataka High Court has upheld the citizen’s “right to be forgotten”, thereby opening the door to block personal records from free public access on the internet. “In this age of search engines there may be records from your past which have no relevance to your present or future life…. Do you have the right to have irrelevant information blocked?” asks Pillai.

He rightly argues that while addressing the issue of public access to personal data, the High Court was touching upon a matter of universal concern which will “inspire our lawmakers to bring clarity into the IT Act on an issue that needs urgent attention.”

Two seemingly contradictory propositions: Open and shut. But both essential to libertarian ideals.

—Inderjit Badhwar is Editor-in-Chief, India Legal. He
can be reached at editor@indialegalonline.com