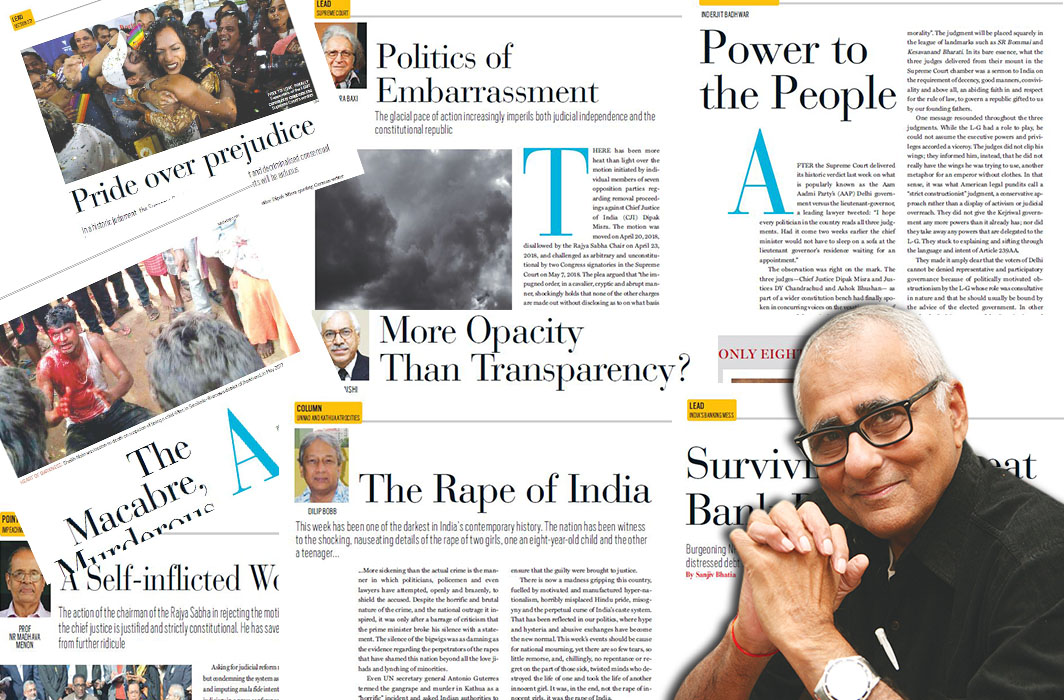 India Legal maintains its advancement and evolution. There’s nothing mechanical about this. The magazine’s expansion, predominantly online, is owing to the editors here devoting a considerable amount of time ruminating about its distinctiveness and character. What makes India Legal what it is? As we set about planning this Special Edition over a month ago, we took small, informal surveys of readers to assess what attributes of the contents they found the most alluring and were likely to  come back for, for a second helping. Some stood out sharply: High production values; superior writing; thought-provoking analyses; the ability to attract some of the best-known reporters and commentators in the country; dedication to fact and accuracy; the ability to provide variety within a niche product; a desire to enlighten without being biased. But most of all, out-of-the-box and fiercely independent thinking.

Each story featured in this issue reflects one or more of these editorial characteristics. In 2018, they became products of our pains, sweat, diligence and pleasure. The stories we have chosen also cover a wide gamut of the trials and tribulations of Indian socio-economic life through the prism of the nation’s judicial system.

What follows are sub-titles along with brief synopses. For those who wish to share these stories on the internet, we are also providing individual links. Happy reading.

The ostensible aim of introducing these bonds was to remove cash donations from political funding, and thereby, black money. Instead, it will lead to crony capitalism and more secrecy.

The main problem with the scheme is that it aims to protect the anonymity of the donor as his name will not be declared. The argument given to support this aim is that many a time, donors do not want to disclose which party they are donating to. However, maintaining donor anonymity at the cost of transparency is a wrong priority.

In the latest Economic Survey, unveiled on the eve of the presentation of the budget, the centre acknowledged the need to address pendency, delays and backlogs in the appellate and judicial arenas as the next frontier on the ease of doing business in India.

Short of treating the Judiciary as another wing of the Executive, the centre expressed its concern that delays and pendency of economic cases are high and mounting in the Supreme Court, high courts, economic tribunals and the tax department. This and the inability to fill vacancies of judges may shake the confidence of citizens in democracy and the rule of law.

The Rape of India / Unnao and Kathua

This week has been one of the darkest in India’s contemporary history. The nation has been witness to the shocking, nauseating details of the rape of two girls, one an eight-year-old child and the other a teenager.

More sickening than the actual crime is the manner in which politicians, policemen and even lawyers have attempted, openly and brazenly, to shield the accused. Despite the horrific and brutal nature of the crimes, and the national outrage they invoked, it was only after a barrage of criticism that the prime minister broke his silence with a statement.

Both the GST Council and taxpayers will have to look at this new tax regime as “work in progress” for at least one more year, and continue to take quick corrective action.

The question now is how has the GST regime worked since its launch. Before coming to GST revenue collection, which, of course, is of paramount importance, let us first look at some fundamental issues. Did the policy decisions work out well? Were they properly implemented? Was the technology support adequate? What was the impact?

The action of the chairman of the Rajya Sabha in rejecting the motion to impeach the chief justice is justified and strictly constitutional. He has saved the judiciary from further ridicule.

I would characterise the January 12 press conference by some judges of the Supreme Court and the consequent assault on the judiciary from several quarters as “a self-inflicted wound”. The ill-conceived impeachment motion by Opposition parties, knowing fully well its futility, can be termed “an unnecessary political gambit”. The Republic and We, the People of India, are the losers in the game which some judges and a section of politicians played to settle personal scores, advance partisan agendas or whatever else.

The glacial pace of action increasingly imperils both judicial independence and the constitutional republic.

There has been more heat than light over the motion initiated by individual members of seven Opposition parties regarding removal proceedings against Chief Justice of India (CJI) Dipak Misra. The motion was moved on April 20, 2018, disallowed by the Rajya Sabha Chair on April 23, and challenged as arbitrary and unconstitutional by two Congress signatories in the Supreme Court on May 7. The plea argued that “the impugned order, in a cavalier, cryptic and abrupt manner, shockingly holds that none of the other charges are made out without disclosing as to on what basis this finding was returned”.

The burgeoning NPAs of banks can be tackled by creating a “bad” bank and using the expertise of distressed debt specialists from the private sector.

India’s banking crisis is not a passing storm. It is a hurricane gathering force that could make landfall within the next six to nine months. The end game for India’s government banks (PSBs) could be drawing near. For the fiscal year 2017-18, 19 of the 21 government banks reported losses totalling Rs 87,000 crore. Bad loans, called NPAs, threaten the viability of these banks and pose significant risks to India’s financial stability. Despite the country’s high economic growth, the risk of bank failures and a systemic contagion is real and increasing in probability.

Social media, acting as a midwife, has led to pervasive and irrational mob fury with the police being helpless. These responses are part of deeper changes in society where people are confronting the anxieties of development.

A few months back, at a philosophy seminar, a colleague and I were talking of the violence of mobs. He asked almost jokingly what would have happened if the Inquisition was speeded up by the mobile phone and internet technology. Girolamo Savonarola, the grand inquisitor and Italian friar known for his prophecies, rather than being a failed witch-hunter would have made Joseph Stalin look weak and silly. Technology, my colleague felt, speeded up evil.

In a historic judgment, the Supreme Court quashed its 2013 verdict and decriminalised consensual homosexuality. But the fight to gain acceptance and change mindsets will be tough.

Five years after it attracted global criticism for upholding the 157-year-old draconian law criminalising consensual homosexual sex, the Supreme Court made a much-needed course correction and created history. It was easily one of the most progressive and beautifully articulated judicial pronouncements of recent times. The verdict by a five-judge constitution bench overturned the top court’s Suresh Koushal judgment of 2013 and read down Section 377 of the Indian Penal Code (IPC), thereby legalising consensual gay sex.

Their numbers are abysmal. While there has never been a woman chief justice, the fairer gender forms just nine percent of justices in High Courts. What can be done to make the Judiciary more egalitarian? 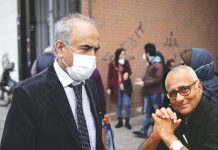 Allahabad HC allows release of prisoners on personal bonds due to...