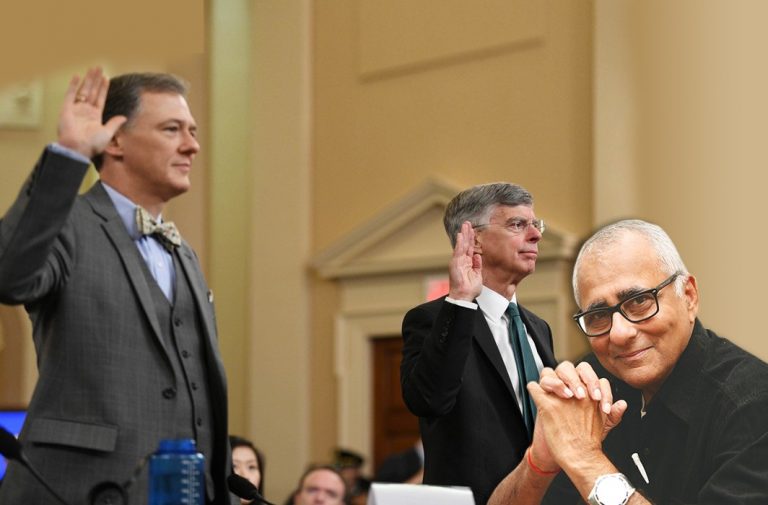 The testimony that witnesses gave under oath during the past 10 days to the US House Intelligence Committee considering the impeachment of a serving president was devastating. Collectively, the evidence they proffered, most of it first-hand, corroborated the charge that President Donald Trump tried to bully and badger Ukraine—an ally—to help him destroy a domestic political opponent through nefarious means and sacrificed the American national interest at the altar of his personal agenda.

Many of the details have already been spelled out through first-hand reporting in India Legal (see: https://www.indialegallive.com/world-news/global-trends-news/us-envoy-gordon-sondland-trump-ordered-to-put-pressure-on-ukraine-to-investigate-joe-biden-75954) and they are available in the world press. They do not bear reporting again in this space. The testimony was, as I said, devastating. But more than that, it was elevating.

Even if it “devastated” Trump’s record and the defenders of his mala fide machinations, it did little to dislodge him from power or to chasten him. His support base among the House Republicans remained tenaciously defiant as it grovelled to support him with non sequiturs; the Trumpers-forever base of neo-Tea Party hardcore Republicans in the Red States appears to continue at 35 percent or more; it is unlikely that even if the House approves an impeachment resolution, it will pass the Senate where the Republican majority will strangle it.

And that is precisely why the performance of the witnesses before the House Intelligence Committee was elevating! These were mostly career foreign service officers, ambassadors, national security advisers and analysts, senior State Department officials, with a sprinkling of political appointees who reported through a chain of command to POTUS (President of the United States). They had nothing to lose but their jobs. They had nothing to risk except deadly reprisals. Many of them were first generation immigrants who chose to become citizens of and serve in a new land which offered them not just opportunity but hope and dignity. They knew that they stood little chance as they stood up and testified to what they considered to be conspiratorial, anti-national behaviour against the foreign policy imperatives of his own country by the most powerful man in the world—which he still continues to be.

They knew that their voices, given the political realities of present-day America, would not topple him and that he and his supporters inside the administration, inside Congress, within his political “base”, the attack-dog press and social media, are capable of fearsome reprisals notwithstanding the public assurances given to them by Committee Chairman Adam Schiff that the law would protect them against retaliation for speaking out in public. Yet, they raised their right hands, promised to speak the truth and nothing but the truth, and they told it like it is.

My friend and former classmate, best-selling US author and commentator Laurence Leamer wrote on his Facebook timeline: “What an incredible day in American history. We saw a new high in an honourable patriotic ambassador and Trump at a new low. I think we may remember this day like the most dramatic moment in the Army-McCarthy hearings or Watergate. I feel good about my country today.”

That’s what I mean by “elevating”. It’s a high to see democracy at work when the whole world seems to have given up on itself—on the very principles of the rule of law, freedom of expression, the freedom to try and soar above the rest even when you see wings being clipped or hacked off all around you and feathers scatter like ashes. These men and women may not have toppled Trump as they faced the cameras and the world, but they certainly took a mighty swipe at the culture of impunity. They may even have toppled it. They were true profiles in courage.

These were not American aristocrats or Boston Brahmins protected by pelf and wealth. They were representatives of what Richard Nixon used to call the “silent majority”— descendants of middle America, from simple, most likely Republican backgrounds (even though their political affiliations did not come up). They had served their country under Republican as well as Democrat presidents.

“Served their country” is the operative phrase here which presidents in their lust for “executive privilege” seem to forget.  Under the US constitution, the King is dead. He, unlike in Britain, does not “long live!” Under the separation of powers formula adopted by America’s founding fathers, all three branches share equally in a distribution of powers. The government is not sovereign. Sovereignty resides with the people—the real masters—who surrender, under a contractual agreement through elections, their sovereignty to their elected representatives and the administration. Under this arrangement, the career civil servant owes his oath of loyalty to the Constitution and not to any potentate-president or political boss.

The civil servant’s function under the executive is to carry out the mandate and laws of Congress and not the whims and fancies of a sultan. The men and women who stepped forward in the House Intelligence Committee—as others, too, have done in the past such as celebrated whistleblowers like Ernest Fitzgerald, consumer crusader Ralph Nader, Daniel Ellsberg, Mark Felt, Cynthia Cooper, John Dean, Victor Marchetti—are (I use the word again) an elevating demonstration that the spirit of America’s founding fathers, no matter what evil or vengeance lurks in the minds of potentates and presidents and their circles of evil, their conspiratorial durbars, is alive. The American Constitution and its institutional liberties probably have as many torchbearers as they have pall-bearers. I would like to believe that the American constitution’s Hall of Fame is larger in mind, spirit and doughtiness than its Gallery of Rogues.

As India celebrates her Constitutional Day, I am reminded that the Indian Constitution and the liberties and freedom of speech enshrined within the Fundamental Rights it bestows on all were inspired to a great extent by the ideas of Thomas Jefferson and Adams and Franklin. But its separation of powers is flawed because the legislature is really a slavish extension of the executive, and true, bipartisan oversight and accountability—as the Indian founding fathers may have envisioned it while drafting the Constitution—are, with exceptions, a pipe dream. In India, political vendetta, undertaken with the connivance of law-enforcement agencies, are passed off as “oversight”. It would be rare indeed, well nigh impossible, that a serving Indian ambassador would appear before a parliamentary committee in secret or, God forbid, a public hearing to answer questions about the dubious foreign policy dealings of a serving prime minister or, for that matter, any minister. We took a lesson from America’s constitution while framing our own several decades ago. Perhaps we can still take a page or two out of that venerable document.