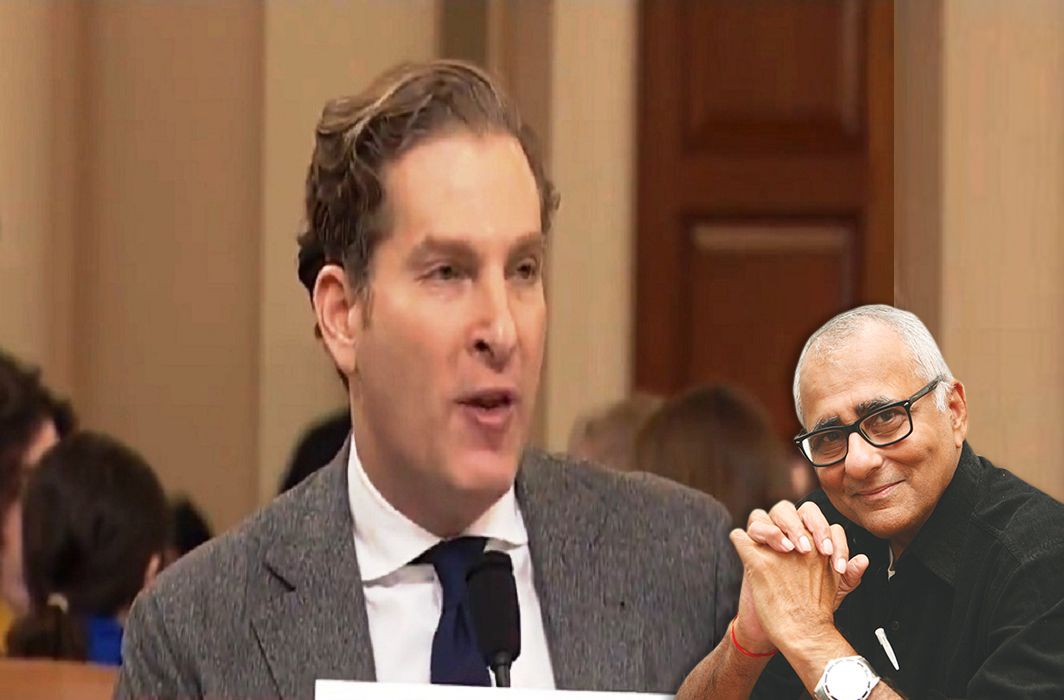 Above: Noah R Feldman was one of the law professors in the US who testified during hearings related to Donald Trump’s impeachment inquiry

The announcement by US House of Representatives Speaker Nancy Pelosi that articles of impeachment would now be drawn up against President Donald Trump was in large part the outcome of free, frank and fearless testimony given publicly and under oath by witnesses who considered it their patriotic duty to expose and condemn official wrongdoing even at the expense of their own careers and, perhaps, even personal safety.

Collectively, the evidence they proffered corroborated the charge that President Trump tried to bully and badger Ukraine—an ally—to help him destroy a domestic political opponent through nefarious means and sacrificed American national interest at the altar of his personal agenda.

Initially, the witnesses before the House Intelligence Committee were mostly civil servants—career foreign service officers, ambassadors, national security advisers and analysts, senior State Department officials—with a sprinkling of political appointees, who reported through a chain of command to POTUS (President of the United States).

Then came marching in the law professors, some of the most distinguished scholars America has produced. The prestigious New Yorker magazine commented that in their testimony before the House Judiciary Committee last week, the four legal scholars showed varying degrees of willingness to take risks—something that had been missing from these fairly-controlled hearings.

The most succinct reporting on this appeared in The New Yorker: Norman Eisen, a counsel for the majority, drew the attention of the witnesses, all law school professors, to an excerpt from the key findings of fact from the Trump-Ukraine impeachment inquiry report that had been sent over by the House Intelligence Committee. It read: “Donald J. Trump…solicited the interference of a foreign government, Ukraine, in the 2020 U.S. presidential elections.” Eisen asked: “Professor Feldman, did President Trump commit the impeachable high crime and misdemeanour of abuse of power based on that evidence and those findings?”

“Based on that evidence and those findings, the President did commit an impeachable abuse of office,” Noah Feldman, who teaches at Harvard, replied.

“And Professor Gerhardt,” Eisen asked, turning to Michael Gerhardt of the University of North Carolina, “did President Trump commit the impeachable high crime and misdemeanour of abuse of power?”

Could such a phenomenon happen in India? I noted in this space last week that the men and women who stepped forward in the Congressional Committees—as others, too, have done in the past—continue to demonstrate that the American Constitution and the institutional liberties it enshrines probably has as many torchbearers as it has pall-bearers. Its Hall of Fame is perhaps larger in mind, spirit and courage than its Gallery of Rogues.

The Indian Constitution and the liberties and freedom of speech enshrined with the Fundamental Rights it bestows on Indian citizens were inspired to a great extent by the ideas of Thomas Jefferson and John Adams and Benjamin Franklin. But its separation of powers is flawed because the legislature is really a slavish extension of the executive, and true, bipartisan oversight and accountability—as the Indian founding fathers may have envisioned it while drafting the Constitution—are, with exceptions, a pipe dream. In India, political vendettas, undertaken with the connivance of law enforcement agencies, are passed off as “oversight”.

It would be rare indeed, well nigh impossible, that a serving Indian ambassador would appear before a parliamentary committee in secret or, God forbid, at a public hearing to answer questions about the dubious foreign policy dealings of a serving prime minister or, for that matter, any minister. The public appearance of a university law professor would be unprecedented.

But it is not as if India does not have her share of conscientious objectors in both the academic and official communities. They express themselves mostly through op-ed pieces in journals or in scholarly seminars. Increasingly, however, retired civil servants from the Indian Administrative Service (IAS) and the Indian Foreign Service (IFS) and related public service undertakings, defence services, the cream of the crop who ran states and embassies and government corporations and police departments as chief secretaries, ambassadors, cabinet officials and managing directors have begun to use “open letters” and petitions to express dissent and demand accountability.

These missives, jointly signed, have begun to receive wide attention in the social media as well as at private conclaves and clubs frequented by serving bureaucrats. The signatories are usually not fly-by-night babus but those who have served under governments of all political hues and dispositions at the state and central levels.

The most recent petition which goes to the very heart of India’s democratic vitality has been addressed to members of the Election Commission of India which is the conductor and watchdog over the electoral process that steers this democracy. It has been signed by 64 former civil servants and endorsed by 83 veterans of the defence services, academics, and other concerned citizens.

The subject: “Your Silence on Issues Raised with Regards to Serious Irregularities in the Conduct of Lok Sabha General Elections, 2019.” It says: “Please refer to the letter dated 2nd July 2019 on the above subject addressed to you. Subsequent reminders have been sent. Your failure to respond to any of the points raised in the letter and reminders, or to even acknowledge their receipt, leads us to wonder whether we will ever receive a response.”

I reproduce, in summary, the salient points from this document:

We do not believe that there is any justification for the ECI not displaying on its website:

(i) the Parliament Constituency-wise, assembly segment-wise, and polling station-wise figures of (a) votes polled in EVMs [i.e. other than postal ballots] and (b) votes as counted in EVMs. Ideally, there should be no discrepancies between the two sets of figures.

(ii) details of the 5 polling stations chosen as “samples” for each assembly segment, and the polling station-wise figures of (a) EVM electronic count and (b) VVPAT manual count. Ideally, there should be no discrepancies between these two sets of figures also. But there have been extensive media reports about large-scale discrepancies in respect of both (i) and (ii) above. While we are aware that media reports may not always be correct, the ECI has failed the test of transparency by not disclosing the above sets of its figures on its website, thereby paving the way for an adverse presumption being drawn in this matter.

Under the British Parliamentary Committees system or the American process referred to at the beginning, the retired dignitaries would surely have been invited to give public testimony to the legislature. In the Indian context, we can only thank the Lord for small mercies—the dignitaries may be retired but are by no means hurt.