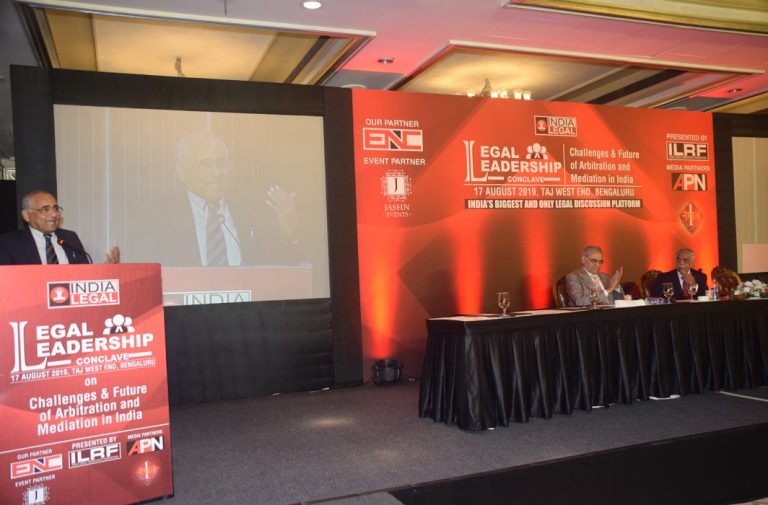 The World Justice Project, an international non-profit initiative intended to advance the rule of law worldwide, defines four universal principles: accountability, just laws, open government and impartial dispute resolution. It was one of these principles—dispute resolution—that headlined the Legal Leadership Conclave held in Bengaluru last week. It is a subject whose importance and relevance to the Indian judiciary today cannot be over-emphasised, considering the huge pendency backlog in Indian courts.

The Conclave is part of a series of discussions and events being held nationwide where judges, sitting and retired, legal luminaries and thought leaders exchange views on contemporary legal issues. The Conclave is a unique and powerful initiative presented by the India Legal Research Foundation, a non-profit organisation, with the ENC group as a partner, and APN and Nepal 1 as media partners. The subject, “Challenges and Future of Arbitration and Mediation in India”, could not be more appropriate considering the staggering number of cases that the judiciary is burdened with. Arbitration and mediation are increasingly popular forms of alternative dispute resolution and have become a credible alternative to cases being decided by courts.

The value of such gatherings is that they promote exchange of ideas and problems associated with the topic, and offer the opportunity to listen to words of wisdom from an array of legal luminaries who bring their original expertise, experience and reasoning to a wider audience. The venue was packed with law students and those interested in the process and delivery of justice. They were transfixed by the depth and erudition of the speeches, the level of debate and the summation delivered so insightfully and brilliantly by former Chief Justice of India TS Thakur. The Conclave also showed that the judiciary has some exceptional minds and original thinkers who have brought new insights to the process of arbitration and conflict mediation, a subject that is considered arcane by a majority of the general public.

Former Chief Justice of India Justice MN Venkatachaliah emphasised that arbitration and mediation must become the new “mantras” for judicial salvation. He said this would help in reducing pendency. Just allocating five percent of the money spent on the judiciary for arbitration and mediation would benefit people enormously, he said. He also suggested that technology and its new tools be used to the maximum in the dispute resolution mechanism, especially Artificial Intelligence. Technology will become the driving force behind all institutions, including the administration of justice, he said.

Such critical issues would generally stay hidden from public scrutiny were it not for legal conclaves such as the one held in Bengaluru, which attract such eminent speakers and inspire them to speak their minds and interact with a larger audience than in a courtroom.

The Legal Leadership Conclave will be hosted in other strategic regions across the country in future. The one in Bengaluru was the start of its Southern Chapter; the previous Conclave held in Mumbai, India’s financial capital, had heralded the Western Chapter and discussed another important contemporary issue, the Insolvency and Bankruptcy Code.

The rule of law and a credible and independent judiciary are the hallmarks of all great democracies. Yet, it often appears that our courts operate in isolated silos with judgments and opinions that tend to be divergent. The Legal Leadership Conclave provides a platform for eminent legal minds to come together and engage in a free and frank exchange of views, which hopefully brings the judiciary closer together in terms of great minds thinking alike. As Greek philosopher Plato noted: the judicial process is “an embodiment of reason, whether in the individual or the community”.