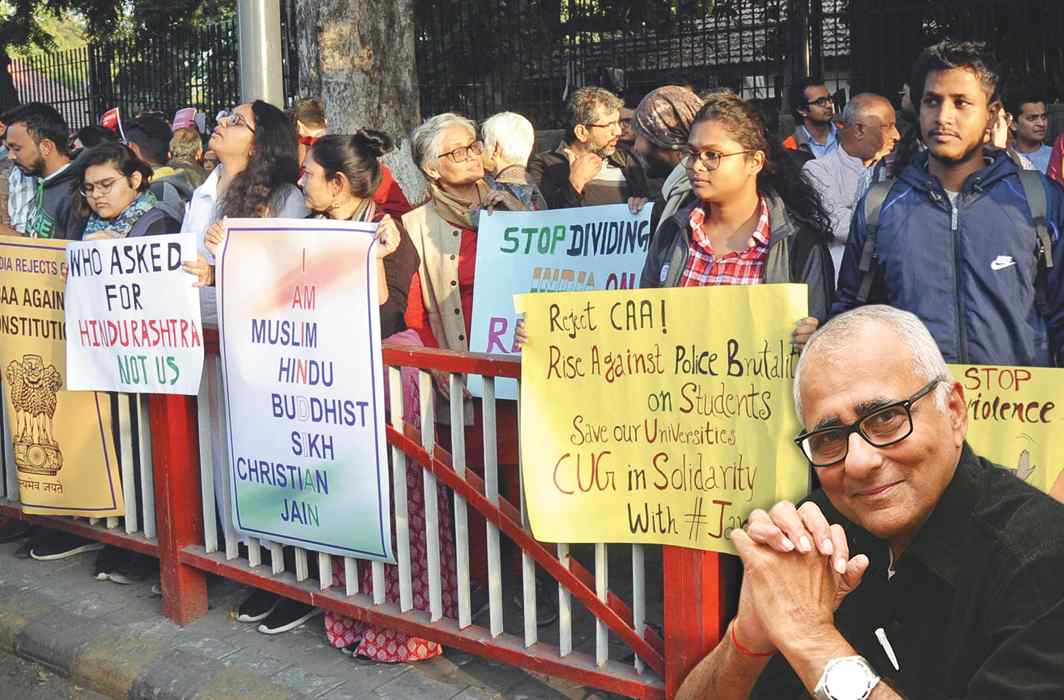 Perhaps the kindest words in the volley of the slings and arrows of  vitriolic abuse flung by political and social opponents of the millions who thronged the streets across this nation starting December 19 was: “Lord, forgive them for they don’t know what they do.” These critics of the swelling countrywide anti-CAA protests underestimate the powers of comprehension and analytical abilities of Indians.

Those Indians who were demonstrating, fully and comprehensively understand the intent, logistics, dog whistles and nuances of this crafty piece of legislation. JUST LISTEN TO THEM! They are voluble, coherent, and, unlike their detractors, not shrill. They have closely followed and understood the parliamentary debates and absorbed the complex technical, humanitarian constitutional issues.

This is a broad-based protest by diverse age groups, religions and communities expressing latent, pent-up resentment against the steady fanning of communalism, bigotry, intolerance of dissent, scoffing at accountability, police brutality, disdain for constitutional morality and rule of law and economic distress. These issues appear to have converged into a mainline stream of visible conflict and confrontation.

It is for this reason that so far, all attempts to engineer and provoke violent communal polarisation have failed before the power of compassion and brotherly love publicly displayed by so many of those who have descended on the streets. The deaf must listen. The blind must see. Maybe straws in the wind…but then who knows what India is all about…Resilient? Passive? Revolutionary?  Full of in-your-face surprises? Unsparingly cruel? Or transient and evanescent, intoxicated by fly-by-night protests?

Perhaps one of the most cogent, meaningful and significant reactions came from Najeeb Jung. Remember him? He is the veteran IAS officer who went on to become the vice-chancellor of Jamia Millia University and then lieutenant-governor of Delhi who turned into elected Chief Minister Arvind Kejriwal’s bête noire as he attempted to thwart and frustrate Kejriwal’s administrative initiatives at the behest of the Modi government.  Wrote Jung in The Indian Express:

“The implementation of the NRC will put India in a state of conflict. It is up to the Union government to quickly step in, initiate dialogue with a range of people that should include political parties, Muslims, students, and civil society, and come up with some understanding to restore the people’s confidence urgently.”

And now hold your breath. The Old Lady of Bori Bunder, as the staid and never-rock-the-boat The Times of India is called, has editorialised: “The cycle of protest and repression can be broken if the government were to revoke the NRC-CAA combo, which would be met with relief by all sections. But part of the problem may be the government wanting to be seen as ‘decisive’, which often leads it into actions which betray lack of forethought and adequate preparation—be it radical moves such as demonetization or even reasonable ones such as GST. If that is the case and in light of the grave constitutional issues raised by CAA, then the best hope for peace to return is for the Supreme Court to step in without delay and quash the Citizenship amendments.”

I asked earlier in this essay: “…but then who knows what India is all about…?” I believe one person certainly did. His name was Vivekananda. I reproduce a portion of the speech he made at the World Parliament of Religions in Chicago in 1893 which should serve as a ready reckoner for our judges, politicians and other decision-makers when in need of spiritual or temporal guidance while deciding this nation’s manifest destiny:

“Sisters and Brothers of America,

“My thanks, also, to some of the speakers on this platform who, referring to the delegates from the Orient, have told you that these men from far-off nations may well claim the honour of bearing to different lands the idea of toleration. I am proud to belong to a religion which has taught the world both tolerance and universal acceptance. We believe not only in universal toleration, but we accept all religions as true. I am proud to belong to a nation which has sheltered the persecuted and the refugees of all religions and all nations of the earth. I am proud to tell you that we have gathered in our bosom the purest remnant of the Israelites, who came to Southern India and took refuge with us in the very year in which their holy temple was shattered to pieces by Roman tyranny. I am proud to belong to the religion which has sheltered and is still fostering the remnant of the grand Zoroas­trian nation. I will quote to you, brethren, a few lines from a hymn which I remember to have repeated from my earliest boyhood, which is every day repeated by millions of human beings: ‘As the different streams having their sources in different paths which men take through different tendencies, various though they appear, crooked or straight, all lead to Thee.’

“The present convention, which is one of the most august assemblies ever held, is in itself a vindication, a declaration to the world of the wonderful doctrine preached in the Gita: ‘Whosoever comes to Me, through whatsoever form, I reach him; all men are struggling through paths which in the end lead to me.’ Sectarianism, bigotry, and its horrible descendant, fanaticism, have long possessed this beautiful earth. They have filled the earth with violence, drenched it often and often with human blood, destroyed civilization and sent whole nations to despair. Had it not been for these horrible demons, human society would be far more advanced than it is now. But their time is come; and I fervently hope that the bell that tolled this morning in honour of this convention may be the death-knell of all fanaticism, of all persecutions with the sword or with the pen, and of all uncharitable feelings between persons wending their way to the same goal.”

Lead pic: IIM Ahmedabad students show placards during their protest against the CAA in Ahmedabad/Photo: UNI