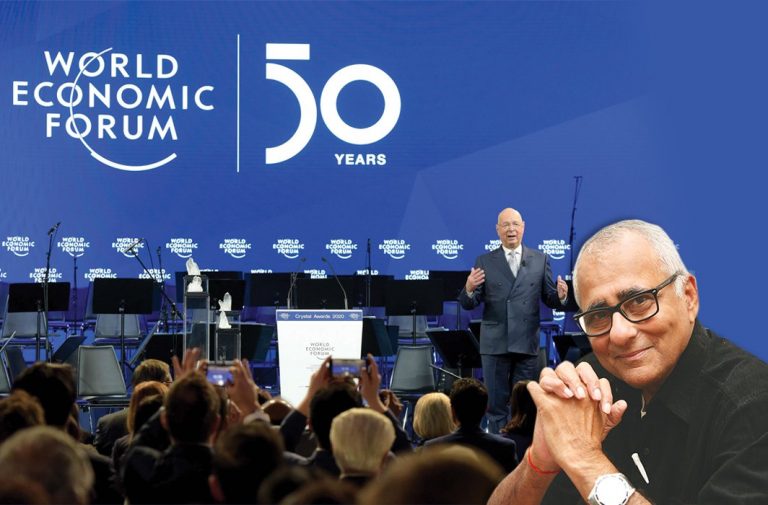 For the first time in recent memory, there is no feel-good “India Story” from Davos. In 2020, the Swiss mountain resort, home to the annual World Economic Forum (WEF), the globe’s most powerful influential confab of business and political leaders, where India got its “story” as the most promising democratic developing nation with its enviable double-digit growth, did not star the country as in previous years.

Driven out of the spotlight, India mostly sulked in the shadows, its representatives and spin doctors searching uncomfortably for answers to tough questions about its rapidly plunging economy, growing social unrest, the Citizenship Act and Jammu and Kashmir.

Davos was happening in the backdrop of India’s projected growth rate plummeting to 4.2 percent and its dropping 10 places to rank 51 out of 167 in the recently released 2019 Democracy Index, formulated and compiled by the prestigious research firm Economist Intelligence Unit (EIU). The country ranked 41 in 2018.

India’s overall democracy score also fell from 7.23 out of a possible 10 in 2018 to 6.90 in 2019. “The primary cause of the democratic regression was an erosion of civil liberties in the country,” the EIU report said. It said that along with the revocation of Article 370 in August last year, stripping Jammu and Kashmir of its special status, India “deployed a large number of troops in J&K, imposed various other security measures and placed local leaders under house arrest, including those with pro-India credentials…The government also restricted internet access in the state”, the report said.

It also noted that the newly amended citizenship law “has enraged the Muslim population, stoked communal tensions and generated large protests in major cities”. But despite large-scale protests, “the EIU expects the ruling Bharatiya Janata Party (BJP) to maintain its focus on popular Hindu nationalist themes, seeking to rebound from poor results in recent state elections. Fiscal and monetary policy constraints and an uncertain business environment in some states will keep the economy from reaching its growth potential in the years ahead”.

Actually, India’s slide, which came more sharply into focus this year because of the concomitant social protests and student unrest which have hogged world headlines, was apparent at Davos last year as well. Poor health conditions and low healthy life expectancy were listed as the biggest curse for India. The country has slipped 10 rungs to end up at 68th rank on the WEF annual Global Competitiveness Index. It was ranked 58th in this Index last year but is among the worst performing BRICS nations this year, along with Brazil which has fallen even further to 71st position.

The Economist, which is rated as the most widely read journal by political leaders and captains of commerce and industry across the world, had, not too long ago, run a cover story calling India a “caged tiger” which was ready to overtake China in global economic performance and set an example for even the more advanced economies. In last week’s cover story, it was disheartening to read this same journal editorialise: “Alas, what has been electoral nectar for the BJP is political poison for India. By undermining the secular principles of the constitution, Mr Modi’s latest initiatives threaten to do damage to India’s democracy that could last for decades. They are also likely to lead to bloodshed.

“The sad truth is that Mr Modi and the BJP are likely to benefit politically by creating divisions over religion and national identity. Such subjects keep the party’s activists and their allies in Hindu-nationalist groups energised—always a boon, given India’s relentless sequence of state elections. They also distract attention from awkward topics such as the economy, which has struggled since the BJP’s thumping election victory last year. Most important, Mr Modi seems to calculate that a sizeable minority of Indian voters are sympathetic to his constant insinuation that Muslims are dangerous fifth-columnists, always scheming to do Hindus down and sell out their country to Pakistan. That is enough to keep him in office. Because of India’s first-past-the-post electoral system and a divided opposition, the BJP won its outright majority in parliament with just 37% of the vote.”

The article ends: “Happily, many Indians have already had enough, as the recent protests show. The Supreme Court, which this week declined to suspend the citizenship law, should heed this… And rather than stoke hostility between two of the world’s great religions, Mr Modi should look for other paths to voters’ hearts.”

In its most recent judgment on the legal challenges, the Supreme Court refused any stay on the CAA without hearing the government and also barred High Courts—which have been quite liberal in granting bail to citizens arrested and detained by the police under various charges for participating in anti-CAA demonstrations—from hearing petitions challenging the constitutional validity of the Act. It is likely that all these matters will be clubbed before a larger constitutional bench.

But academics and political thought leaders like Balveer Arora have asked: “Is there a precedent for gagging the High Courts, preventing them from hearing challenges to central laws? Some High Courts have handed down remarkably progressive judgments….”

The answer to this question which also has relevance to the controversy over whether states can refuse to obey central diktats they consider detrimental to constitutional propriety, may lie in this summary—taken from the Supreme Court website—regarding the powers of the apex court. Excerpts:

From the above, an argument may well be made that the Supreme Court’s jurisdiction is both appellate as well as original. But does that mean it can circumvent the power of High Courts by pre-empting, in advance, a matter, say, of fundamental rights from even being heard by a High Court? Can the Supreme Court, for example, issue a decree that all matters concerning bail for citizens arrested by the police under various charges for participating in public protests be referred only to the Supreme Court and all lower courts be barred from adjudicating these appeals because they arise from the same set of circumstances, ie, challenges to a central law?

But the central issue as Balveer Arora posits, is that the apex court should, alternatively, decide constitutional matters on priority. “Can you have constitutional uncertainty for prolonged periods of time, leaving the executive in the dark on whether the laws it continues to apply are constitutionally valid or not?”