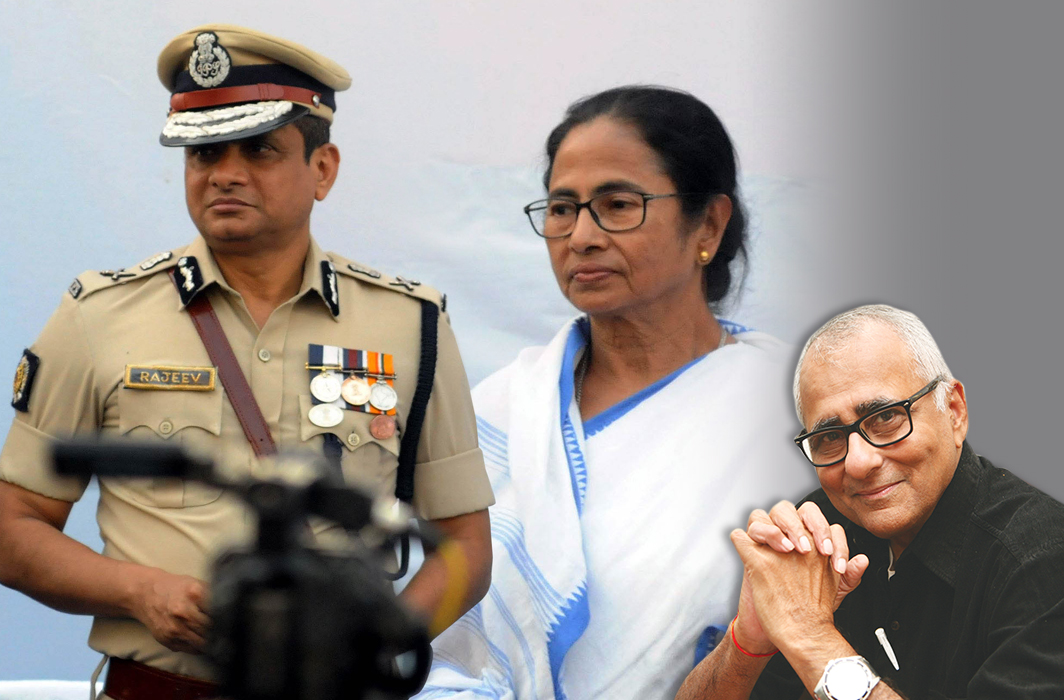 I cannot but marvel at the brilliant exposition made by Prof Upendra Baxi of the drama (or was it a farce?) that unravelled on the stage of Kolkata when some 40 CBI sleuths flew in from Delhi for a Grand Inquisition, and possible arrest, of the police chief, Rajeev Kumar, on the suspicion that he may have tampered with evidence on the culprits involved in West Bengal’s chit fund scam.

Baxi’s cover story delves with precision, depth and uncanny legal calibration into this sordid, pathetic episode. The acuity of his thoughts and the precision of his language are overwhelming and for me to try and paraphrase them would be akin to bringing clarity to what is already lucid and deserves careful reading, especially in the judicial community.

The immediate points that bother me from a common sense perspective as I look at this case are 1. The CBI’s motive appeared to be harassment and humiliation; 2. Kumar is not an acc­used, no FIR has been registered against him; 3. He was the head of the Special Investigation Team which investigated the scam and two of the main accused who joined the BJP while the CBI was still investigating, were virtually let off the hook; 4. No FIR for offence under Section 201 during the years since the probe began; 5. If there’s no offence in the first place, how does the question of “surrender” arise?

From a longer-term perspective, Prof Baxi has lured me into re-examining, actually, reiterating the wisdom of the Sarkaria Commission as I have done earlier in a similar editorial. It still fits. Not enough can be said about the sagacity, political perspicacity, scholarship and uncanny farsightedness of the luminaries—Ranjit Singh Sarkaria, B Sivaraman and Dr SR Sen. These notables undertook—between 1983 and 1988—a remarkable review of centre-state relations under the Indian Constitution and authored a 1,600-page magnum opus which stands out as a beacon to the Indian system of governance, guiding it more forcefully towards the cardinal principle that glues Indians together as citizens—the practice and pursuit of enlightened federalism.

In the aftermath of the baffling politico-legal-constitutional melodrama being played out in West Bengal, it is significant that the Shiv Sena, a regional avatar of the Hindu Right more in tune with the BJP’s Hindutva nationalism than the Congress’s inclusive secularism, should be singing the same tune as Mamata Banerjee, Akhilesh Yadav, Tejaswi Yadav and the Grand Old Party. In an earlier episode of centre-state relations, the Sena officially condemned the BJP’s imposition of Governor’s Rule in Uttarakhand under Article 356 of the Constitution as a “strangulation” of democracy: “In a democracy, the voice of the opposition is of paramount importance and should not be strangled since a single-party rule would be worse than an Emergency or dictatorship. The country will be destroyed if the opposition is targeted and snuffed out.”

The author of this sentence could well have been a member of India’s Constituent Assembly!

What is deeply disturbing is the habitual and flagrant disregard for legal, constitutional and administrative pronouncements by politicians and political parties. The conditions under which Article 356 (to be applied in the “rarest of rare cases”) can be used to dismiss an elected assembly and impose Governor’s Rule are clearer than daylight. There are no loopholes. The Constitution and landmark Supreme Court decisions (Bommai in 1994, and Rajasthan versus Union of India in 1977) stand together as an impregnable legal fortress against the misuse of this provision by ruling parties at the centre to establish their primacy over a state government through horse-trading of legislators and political subterfuge with the connivance of state governors who act as agents of the ruling party rather than as representatives of the Union of India.

Yet, this Article has been invoked 126 times since Independence to dismiss state governments. It is clear that the Article may be invoked in emergency situations when there’s a total breakdown of law and order, as a constitutional necessity. But it cannot be used as a political weapon. And it certainly cannot be used in violation of the Gold Standard in case of an alleged loss of majority in a legislature—the necessity of a floor test.

Alas, the party crying foul the loudest—the Congress—has historically been the worst violator, starting with the Nehru government which dismissed the first democratically elected Communist regime of EMS Namboodiripad in Kerala in 1959. As blogger Nived Narayan summed it up on Quora: “It set a precedent. And that was the real problem. The Congress government dismissed state governments at will whenever they were formed by parties which it had problems with. Such belligerent show of strength by the central government, and that too from Nehru himself set a bad precedent which later set an example for the likes of Indira and the Janata government of Morarji to trample upon the federal structure.”

“Trample upon the federal structure” is the operative phrase. It is playing with fire. It is tantamount to unravelling the delicately and sensitively woven warp and woof of India which came into being as a nation of citizens in 1947-48 after more than 562 independent principalities joined the Indian Union (formerly British India).

It was to the preservation of this striking new national amalgam of the most culturally, geographically and linguistically diverse people of the world through the concept of Indian citizenship that the Sarkaria Commission addressed itself. Its mandate—re-examining and suggesting reforms in the whole gamut of centre-state relations—was huge and daunting. Further, it laid the intellectual and academic framework for a monumental project later undertaken by the first NDA government in 2000. Under a bold initiative from Prime Minister Atal Bihari Vajpayee, the government established the National Commission to Review the Working of the Constitution (NCRWC), also known as the Justice Venkatachaliah Commission, to recommend possible amendments to the Constitution of India. The mammoth task force submitted its report in March 2002. What was the key feature in the Constitution that enabled the very idea of Indian nationhood? Both commissions answered this question with an answer that was spot on! Federalism.

To strengthen federalism, even at the cost of more decentralisation and greater regional autonomy, Sarkaria believed, was to strengthen India. But laws and emergency provisions were also needed to prevent the disintegration of the nation through violence and anarchy. One of them was Article 356.

The 1,600-page Sarkaria report with 247 recommendations spread over 19 chapters made the following observations: “Federalism is more a functional arrangement for cooperative action, than a static institutional concept. Article 258 (power of the Union to confer powers, etc, on states in certain cases) provides a tool by the liberal use of which cooperative federalism can be substantially realized in the working of the system. A more generous use of this tool should be made than has hitherto been done, for progressive decentralization of powers to the governments of the states….”

Relying heavily on the Sarkaria report, the NCRWC reiterated that only the spirit of “cooperative federalism” can preserve the balance between the Union and the states and promote the good of the people and not an attitude of dominance or superiority.

“Under our constitutional system, no single entity can claim superiority,” states the Sarkaria report. “Sovereignty doesn’t lie in any one institution or in any one wing of the government. The power of governance is distributed in several organs and institutions—a sine qua non for good governance. Even assuming that the centre has been given certain dominance over the states, that dominance should be used strictly for the purpose intended, not the oblique purposes. An unusual and extraordinary power like the one contained in Article 356 cannot be employed for furthering the prospects of a political party or to destabilize a duly elected government and a duly constituted legislative assembly. The consequen­ces of such improper use may not be evident immediately. But those do not go without any effect and their consequences become evident in the long run and may be irreversible.”

Both the commissions remind the government that Article 356 appears in that part of the Cons­titution which relates to emergency provisions. Though the Article itself does not employ the expression emergency or any of its variants, “the fact that it occurs in the chapter relating to emergency cannot be lost sight of. This is merely to emphasise the unusual character of the said provision and to remind ourselves of the hope expressed by Dr Ambedkar that ‘such articles (articles 355 and 356) will never be called into operation and that they would remain a dead letter’.”

Post Script: Both the Sarkaria and Venakatachaliah reports—brilliant documents promoting liberal governance and democratic values—are gathering dust. Far from being a “dead letter” as the father of our Constitution had hoped it would become, Article 356 seems to live on endlessly.