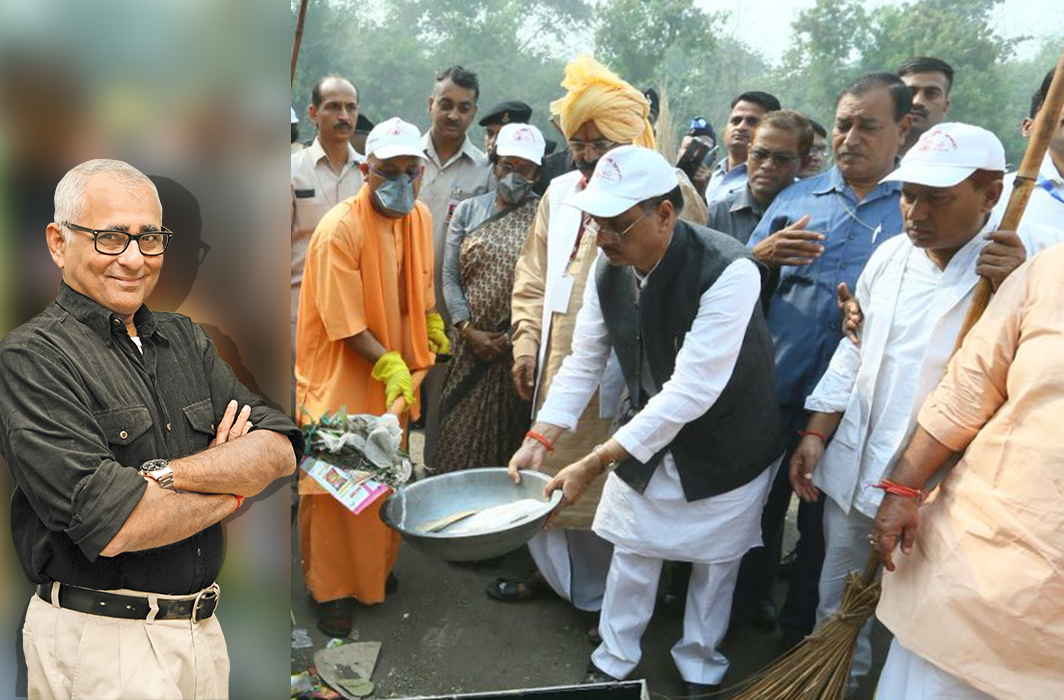 It is time that those who profess to be hardline Hindus or the guardians of this great religious tradition stop scoring goals against themselves and their undoubtedly magnificent heritage. Nowhere is this better reflected than in the spectacle of UP Chief Minister Yogi Adityanath taking up a broom and doing what amounts to a penitent kar seva at the Taj Mahal, one of the acknowledged architectural wonders of the world.

This PR exercise in damage control was not only avoidable but also an example of the consequence of the adage of cutting your nose to spite your face—pursuing revenge in a way that would damage oneself more than the object of one’s anger. The “object” in this case is the Muslim religion which, according to its political critics, suppressed and tyrannized the majority community of this country for centuries and therefore, its cultural, social and architectural achievements should not be celebrated or eulogized by any patriotic Indian.

Its monuments should logically meet the fate of the Bamiyan Buddhas at the hands of the Taliban. Or so some BJP politicians like Sangeet Som, the UP state legislator from Sardhana, would have us believe. He recently described the Taj as a “blot” on Indian history, ostensibly because it symbolizes tyrannical Muslim dominance of Bharat and her original inhabitants. Never mind that the broom-wielding Yogi, following an international and domestic explosion of rage over this statement, has disowned this sentiment and asserted that Emperor Shah Jahan’s monument of love was built with the sweat and toil of ordinary Indians. The central point still remains that people like Adityanath have been hoisted by their own petard.

Som is hardly alone in his views. Earlier, the official UP tourism pamphlet simply eliminated the Taj from its pages. Then the fearsome Bajrang Dal-Sangh Parivar activist Vinay Katiyar claimed that the Taj was built on a former temple of Shiva—an argument similar to that of the demolished Babri Masjid-Ram Janmabhoomi and Banaras’s Gyanvapi imbroglios, which are entangled in legal webs.

These sentiments actually reflect not only communal revanchism but also a deeper xenophobic Parivar mindset that urges India to reject “impure” influences on its otherwise pristine Aryan heritage. This is a more across-the-board phenomenon than most people suspect. Even the redoubtable Lal Krishan Advani succumbs to bouts of cultural chauvinism. A couple of weeks ago, the former deputy prime minister suddenly said that freeing oneself of western influences alone would denote liberation: “Real freedom will come only when we free ourselves of the domination of western education, western culture and western way of life.”

The ironies flow fast and furious, leaving people wondering whether these utterances emanate from innate indoctrination or political expediency. Advani himself studied at the Roman Catholic St Patrick’s School in Karachi before Partition and has proudly attended Founder’s Day there. He has penned his major books in English, including his “Prison Diaries” during the Emergency. His daughter, Pratibha, is an example of an eclectic, multi-cultural Indian. 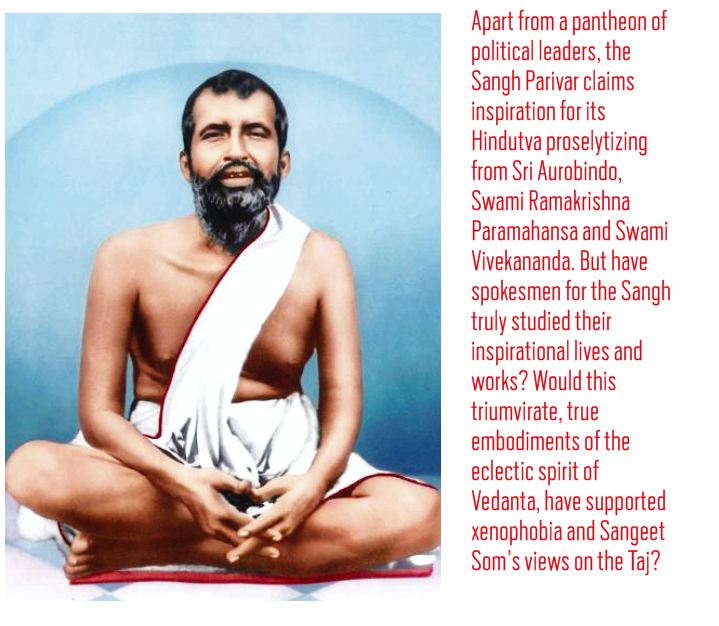 Other iconic founders of the Sangh Parivar had strong foreign influences. Veer Savarkar studied law in England. Deen Dayal Upadhyaya, one of the founders of the Jana Sangh and an exponent of political Hindutva, obtained his Master’s from St John’s College in Agra—in English literature. Co-founder Syama Prasad Mookerjee graduated first class in English from Presidency College in Calcutta and then received his law degree from London’s prestigious Lincoln’s Inn and was admitted to the British Bar.

Apart from this pantheon of political leaders, the Sangh Parivar claims inspiration for its Hindutva proselytizing from Sri Aurobindo, Swami Ramakrishna Paramahansa and Swami Vivekananda. But have spokesmen for the Sangh truly studied their inspirational lives and works? Would this triumvirate, true embodiments of the eclectic spirit of Vedanta, have supported xenophobia and Sangeet Som’s views on the Taj and by implication, the minority community?

Aurobindo spent most of his young life in Europe where he learned Latin, German, French and English, before returning to India to become a revolutionary and then, a Vedantic seer. His colleague, “The Mother”, was a French woman, Mirra Alfassa. As Aurobindo famously noted: “India can best develop herself and serve humanity by being herself and following the law of her own nature. This does not mean, as some narrowly and blindly suppose, the rejection of everything new that comes to us in the stream of Time or happens to have been first developed or powerfully expressed by the West. Such an attitude would be intellectually absurd, physically impossible, and above all unspiritual; true spirituality rejects no new light, no added means or materials of our human self-development. It means simply to keep our centre, our essential way of being, our inborn nature and assimilate to it all we receive, and evolve out of it all we do and create.”

Vivekananda spent much of his life travelling and preaching in America and Europe where he learned French. His landmark Chicago speech, delivered in flawless English at the Parliament of Religions on September 11, 1893 began: “I am proud to belong to a religion which has taught the world tolerance and universal acceptance…We accept all religions as true…I fervently hope that the bell that tolled this morning in hour of this convention may be the death-knell of all fanaticism.”

It is time that those who profess to be hardline Hindus stop scoring goals against themselves and their magnificent heritage. Nowhere is this better reflected than in the spectacle of UP Chief Minister Yogi Adityanath taking up a broom and doing what amounts to a penitent kar seva at the Taj Mahal in Agra

Noted American Vedantist John Schlenck wrote: “Vivekananda recognized, with great pathos, that India had by and large failed to live up to its core spiritual values. He laboured strenuously not only to bring these values to the West but to goad and inspire Indians to live up to their own great ideals. And he recognized many good things in the West—not only science, technology, and material achievement, but other aspects that are not really materialistic—from which he believed India could and should learn.”

And Vivekananda’s guru, the ethereal Ramakrishna said: “I have practiced all religions—Hinduism, Islam, Christianity—and I have also followed the paths of the different Hindu sects. I have found that it is the same God toward whom all are directing their steps, though along different paths. You must try all beliefs and traverse all the different ways once. Wherever I look, I see men quarrelling in the name of religion—Hindus, Mohammedans, Brahmos, Vaishnavas, and the rest. But they never reflect that He who is called Krishna is also called Siva, and bears the name of the Primal Energy, Jesus, and Allah as well—the same Rama with a thousand names. A lake has several ghats. At one the Hindus take water in pitchers and call it ‘jal’; at another the Mussalmans take water in leather bags and call it ‘pani’. At a third the Christians call it ‘water’. Can we imagine that it is not ‘jal’, but only ‘pani’ or ‘water’? How ridiculous! The substance is One under different names, and everyone is seeking the same substance; only climate, temperament, and name create differences. Let each man follow his own path. If he sincerely and ardently wishes to know God, peace be unto him! He will surely realize Him.”

And for all those who consider the Taj a “blot” on Indian history, here is Sister Nivedita, Vivekananda’s Scots-Irish disciple, quoting her Guru on Shah Jahan, (who had the Taj Mahal built): “Ah! He was the glory of his line! A feeling for, and discrimination of beauty that are unparalleled in history. And an artist himself! I have seen a manuscript illuminated by him, which is one of the art-treasures of India. What a genius!”