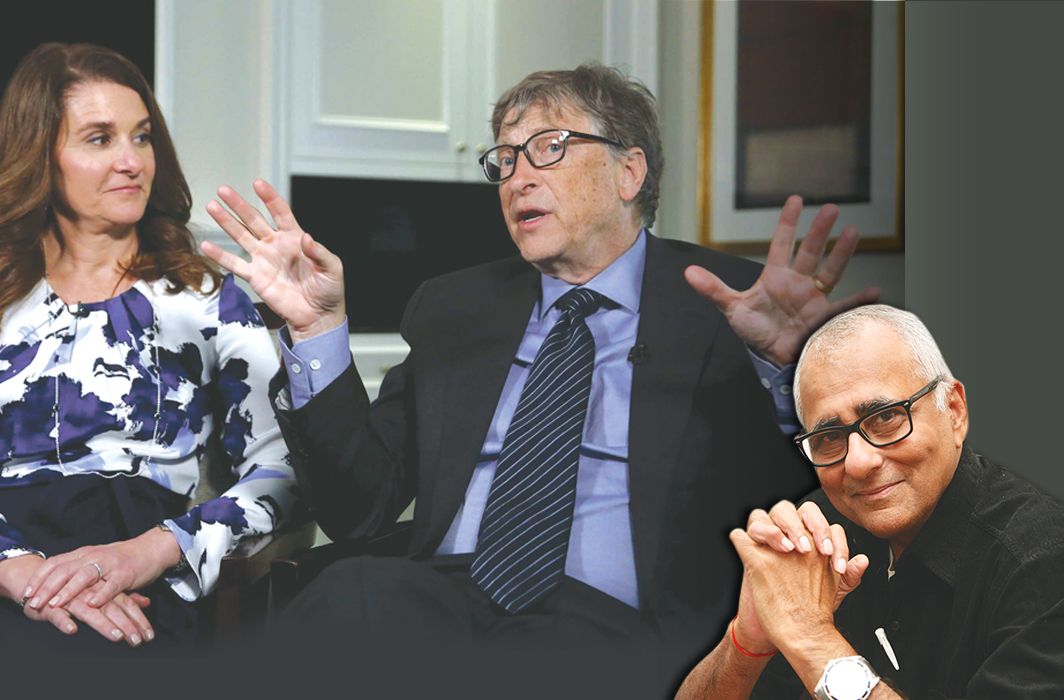 Bill and Melinda Gates, the known universe’s richest power couple—until they recently surrendered that position by a hair’s breadth to Amazon Czar and Czarina Jeff and MacKenzie Bezos—don’t seem to share the prevailing pessimism about where our world is headed. Given the daily overdose of news about climate change, increasing violence, war and pestilence, the rapid destruction of the rule of law under authoritarian jackboots, resurgent racism, terror…most of us seem to take for granted that we are on a one-way ticket to hell.

But, surprise, surprise…the Microsoft wunderkinds Melinda and Bill don’t seem to think so. In fact, they put their money where their mouth is by investing more and more of their wealth into charity, in particular the Bill & Melinda Gates Foundation which has a large presence in India, a country of which Gates is a personal fan and unabashed admirer because of its ingenuity, scientific temper and the high-tech orientation of its younger generation.

A hallmark of India is its investment in the thoughtful application of scientific and technological advances to meet the needs of the poorest populations, Gates believes. On a recent visit to India, Bill Gates explained why he is “an optimist about India”. The country, he told the National Institute for Transforming India, is “taking technology, including digital technology, and using it” to “write a new chapter in the history books about how a people and country can rise to big challenges”.

You don’t invest in a losing proposition. That’s common sense. Yet the Gates’ continue investing in the world in the belief that they’re backing a winning horse. In fact, that’s where a lot of their wealth has gone. They recently donated $4.6 billion worth of shares in Microsoft Corp, making this his largest donation in 17 years. Earlier, the philanthropist donated $64 million, according to a Securities & Exchange Commission filing reported by Bloomberg.

Bill’s total number of gifts to charitable donations amount to $50 billion, according to CNBC. His last contribution of this size came in 2000 when he gave away $5.1 billion worth of Microsoft shares. Just a year earlier, he gave away $16 billion worth in shares. Forbes estimates his current net worth at about $90 billion.

It has been a practice for Melinda and Bill to release each year a joint letter about what they believe should determine the priorities to make a better world. It is their private “State of the Union” message. And this year’s message is optimistic and upbeat notwithstanding developments in US politics, political upheavals in Europe, civil wars and tidal waves of refugees.

Their letter—their 10th annual missive—released last week, trumpets their “outspokenness about our optimism. The headlines are filled with awful news. Every day brings a different story of political division, violence, or natural disaster, or sexual harassment”.

It has been a practice for Melinda and Bill Gates to release each year a joint letter about what they believe should determine the priorities to make a better world. It is their private “State of the Union” message

Despite the headlines, “we see a world that’s getting better”. They compare today to the way things were a decade or a century ago. And they find the world healthier and safer than ever. “The number of children who die every year has been cut in half since 1990 and keeps going down. The number of mothers who die has also dropped dramatically. So has extreme poverty—declining by nearly half in just 20 years. More children are attending school. The list goes on and on.”

The letter is so eminently quotable that paraphrasing it in precis form would do it injustice. Here are a few memorable lines:

“Being an optimist isn’t about knowing that life used to be worse. It’s about knowing how life can get better. And that’s what really fuels our optimism. Although we see a lot of disease and poverty in our work—and many other big problems that need to be solved—we also see the best of humanity. We spend our time learning from scientists who are inventing cutting-edge tools to cure disease. We talk to dedicated government leaders who are being creative about prioritizing the health and well-being of people around the world. And we meet brave and brilliant individuals all over the world who are imagining new ways to transform their communities.”

That’s their response when people ask them how they can be so optimistic. “It’s a question we’ve been getting more and more, and we think the answer says a lot about how we view the world.” Here are excerpts from “tough questions” people throw at them along with the answers:

Why don’t you give more in the United States?

Melinda: Our foundation spends about $500 million a year in the United States, most of it on education. That’s a lot, but it is less than the roughly $4 billion we spend to help developing countries.

Take vaccines. We assumed that since it was possible to prevent disease for a few cents or a few dollars at most, it was being taken care of. But it turned out that we were wrong, and tens of millions of kids weren’t being immunized at all.

Why don’t you give money to fight climate change?

Bill: We do! Some of it involves our foundation, and some of it involves our own personal investments. Personally, we’re investing in innovations that will cut back on greenhouse gases (what’s called climate-change mitigation). The world needs new sources of reliable, affordable clean energy, but it has been dramatically underfunding the research that would produce these breakthroughs.

Hundreds of millions of people in developing countries depend on farming for their livelihoods. They had almost nothing to do with causing climate change, but they will suffer the most from it. When extreme weather ruins their harvest, they won’t have food to eat that year. They won’t have income to spend on basic necessities like healthcare and school fees. For smallholder farmers, climate change is not just an ominous global trend. It is a daily emergency.

Are you imposing your values on other cultures?

Bill: On one level, I think the answer is obviously no. The idea that children shouldn’t die of malaria or be malnourished is not just our value. It’s a human value. Parents in every culture want their children to survive and thrive.

Melinda: We’re acutely aware that some development programs in the past were led by people who assumed they knew better than the people they were trying to help. We’ve learned over the years that listening and understanding people’s needs from their perspective is not only more respectful—it’s also more effective.

Melinda: We asked ourselves the same question at first. Hans Rosling, the brilliant and inspiring public health advocate who died last year, was great at answering it. I wrote about the issue at length in our 2014 letter. But it bears repeating, because it is so counterintuitive. When more children live past the age of 5, and when mothers can decide if and when to have children, population sizes don’t go up. They go down. Parents have fewer children when they’re confident those children will survive into adulthood. Big families are in some ways an insurance policy against the tragic likelihood of losing a son or a daughter.

Bill: There’s another benefit to the pattern Melinda describes—first more children survive, then families decide to have fewer children—which is that it can lead to a burst of economic growth that economists call “the demographic dividend”. Here’s how it works.

“In the past year, I’ve been asked about President Trump and his policies more often than all the other topics in this letter combined. He proposed severe cuts to foreign aid. To its credit, Congress has moved to put the money back in the budget,” says Bill Gates

How are President Trump’s policies affecting your foundation’s work?

Bill: In the past year, I’ve been asked about President Trump and his policies more often than all the other topics in this letter combined.

For decades the United States has been a leader in the fight against disease and poverty abroad. These efforts save lives. They also create US jobs. And they make Americans more secure by making poor countries more stable and stopping disease outbreaks before they become pandemics. The world is not a safer place when more people are sick or hungry.

President Trump proposed severe cuts to foreign aid. To its credit, Congress has moved to put the money back in the budget. It’s better for the United States when it leads, through both hard power and soft power.

I believe one of the duties of the president of the United States is to role model American values in the world. I wish our president would treat people, and especially women, with more respect when he speaks and tweets. Equality is an important national principle. The sanctity of each individual, regardless of race, religion, sexual orientation, or gender, is part of our country’s spirit. The president has a responsibility to set a good example and empower all Americans through his statements and his policies.

Is it fair that you have so much influence?

Melinda: No. It’s not fair that we have so much wealth when billions of others have so little. And it’s not fair that our wealth opens doors that are closed to most people. World leaders tend to take our phone calls and seriously consider what we have to say. Cash-strapped school districts are more likely to divert money and talent toward ideas they think we will fund.

Even though our foundation is the biggest in the world, the money we have is very small compared to what businesses and governments spend. For example, California spends more than our entire endowment just to run its public school system for one year.

There’s another issue at the heart of this question. If we think it’s unfair that we have so much wealth, why don’t we give it all to the government? The answer is that we think there’s always going to be a unique role for foundations. They’re able to take a global view to find the greatest needs, take a long-term approach to solving problems, and manage high-risk projects that governments can’t take on and corporations won’t. If a government tries an idea that fails, someone wasn’t doing their job. Whereas if we don’t try some ideas that fail, we’re not doing our jobs.

Why are you really giving your money away—what’s in it for you?

Bill: It’s not because we think about how we’ll be remembered. We would be delighted if someday diseases like polio and malaria are a distant memory, and the fact that we worked on them is too.

There are two reasons to do something like this. One is that it’s meaningful work. Even before we got married, we talked about how we would eventually spend a lot of time on philanthropy. We think that’s a basic responsibility of anyone with a lot of money. Once you’ve taken care of yourself and your children, the best use of extra wealth is to give it back to society.

Maybe 20 years ago, we could have made a different choice about what to do with our wealth. But now it’s impossible to imagine. If we’d decided to live a different life then, we wouldn’t be us now. This is who we chose to be.

Editor’s Comment: The true meaning of commitment to Achhe Din by