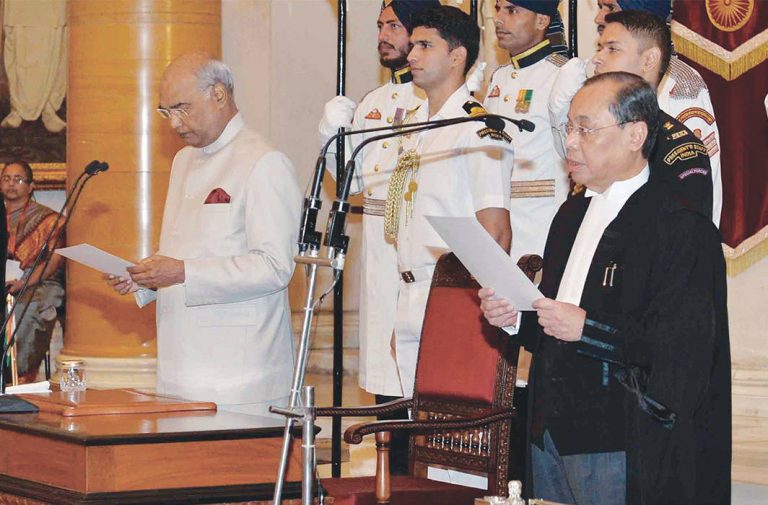 Above: Justice Ranjan Gogoi being sworn in as the CJI by President Ram Nath Kovind at Rashtrapati Bhavan/Photo: UNI

Immediately after donning the mantle of the chief justice of India, Justice Ranjan Gogoi offered some clue as to what the Supreme Court under him will be like. His priority, he declared, would be to focus on the vast backlog of cases and filling judicial vacancies. Those aims, however, are largely administrative in nature, requiring strict discipline, qualities he is well known for. What assumes much greater importance is his attempt to revive a national conversation on “constitutional morality.”

For most people inured to political venality and muscular majoritarianism, that objective may seem utopian but viewed in the context of recent judgments by the highest court in the land, it is extremely significant.

Under his predecessor, Dipak Misra, the Supreme Court had struck down Section 377 of the Indian Penal Code, saying it was upholding “constitutional morality” and not “majoritarian morality” while deciding to decriminalise homosexuality. The verdict overruled a previous judgment which held that only a small number of people were exercising their rights. As the former CJI said later at a conference of law students, “it’s not the number that determines the right. A right permissible under the Constitution is a right that has to be respected.”

That right was also witnessed in the Supreme Court ruling on Sabarimala to allow women into the temple. It was seen as correcting a discriminatory social and religious practice that was violative of Part III of the Constitution. Constitutional morality basically rejects the transactional view of the Constitution or majority opinion which is the key to managing a vast country like India with its diversity of cultures, communities, castes, religions and customs. To adhere to the majority view rather than the Constitution carries the danger of empowering the mob and undermining the rule of law. The current tension—social, cultural, ideological and political—between the majority and India’s minorities is a clear and present threat to the country’s potential for progress. The only glue that holds it all together is constitutional morality. In a pluralistic society, acceptance of individual identity is the key to social stability. Constitutional morality guarantees equal rights to everyone.

In that context, Justice Gogoi’s assertion that the Constitution will reign supreme in the Supreme Court is good news for Indian democracy and the rule of law. It is purely coincidental but also ironic that the test of whether his actions meet his words during his 13-month tenure—will now be live streamed.