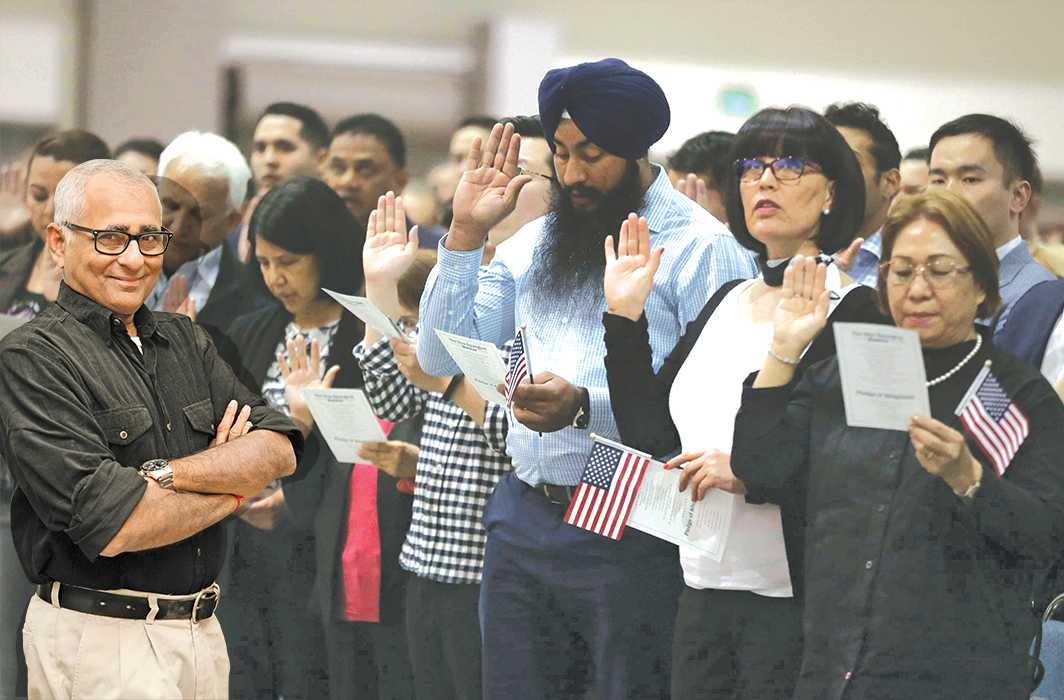 In a remarkable display of rebellion against President Donald J Trump’s new immigration policies, the city of Chicago, often called the gateway to the heart of America, has filed a lawsuit against the US Department of Justice challenging Attorney General Jeff Sessions’ attempt to cut off federal funding to what Trumpists called “sanctuary cities”.

The windy city’s natives include Barack Obama, Oprah Winfrey, Al Capone, Nelson Algren, Mayor Richard M Daley, Robin Williams, Harrison Ford, Benny Goodman, Nat King Cole… they made some of the best music, films, crime, politics. But even during the worst of Chicago’s gang wars, the city’s burgeoning community of working class immigrants from Europe and Asia and Latin America had no fear from the Feds.

Today, as Trump pursues his campaign pledge of “Make America Great Again”, American immigrant communities—both legal and illegal—across metropolitan areas cower in fear from the new Feds, called ICE (Immigration and Customs Enforcement) who are, as one report bluntly put it, “unpredictable and brutal” in their swooping raids and use of the fast-tracking deportation machinery in which families are often torn asunder and legal procedures are thrown to the winds.

Last November, while covering the US election, I wrote in India Legal that Trump’s making America “Great” again was a code for making America “White” again, a subliminal appeal to supra-nationalism and white supremacist sentiments which has been the unshakeable belief of a core group of Americans which finally found a national champion in Trump. To them, the fact that America is no longer totally white does not matter (African-Americans are now 13.5 percent of the US population, and Latinos and Hispanics about 18 percent, while Asian and other races constitute about 11 percent).

What counts is the supremacist syndrome, and the new immigration proposals are nothing short of a clarion call for Trump’s version of a long-overdue ethnic cleansing in which the city and local administrations are being arm-twisted to cooperate with ICE raids.

In taking the Justice Department to Court, Chicago’s Mayor Rahm Emanuel whose grandfather, a Romanian Jew, migrated to America, has fired a powerful ethnic missile against Trump’s anti-immigrant policies.

The arm-twisting the Trump administration is resorting to is the withholding of federal funds for law enforcement such as purchase of police vehicles and essential equipment for crime prevention to “sanctuary cities” like Chicago, whose mayors refuse to cooperate with the goon tactics of ICE and insist, rather, on the orderly rehabilitation and legitimisation of migrants and their families. Emanuel has challenged the Justice Department’s tactics as unconstitutional in the absence of specific legislation to change the immigration laws.

Last week, Donald Trump backed such legislation amid acrimonious debate. The new bill would not only cut in half the one million migrants allowed into the country annually but also introduce a “merit system” under which high educational qualifications and the ability to speak good English would be new criteria for admission. Also the preference given to families would no longer be automatic. Indian families with American passports, for example, would be able to bring in spouses or children under specific safeguards and dependent, aged parents would only be given one or two-year visas.

As an Indian-origin doctor living in Queens, New York, for 30 years told me: “This will simply tear families apart. A lot of us Indian Republicans who supported Trump will campaign against him.”

But at this point, they need not bother. The bill is unlikely to pass either House. Immigration, no matter what the core ultra-right which helped Trump win feels, is as American as apple pie and motherhood. Democrat Mayor Emanuel who was once Obama’s White House chief of staff, would never have been in the US if Trump’s merit system had applied to his grandfather. Powerful Republican Senators Marco Rubio and Ted Cruz are the sons of Cuban immigrants whose fathers spoke no English and worked as daily wage labourers as they educated their children who would one day run for president. And they did.

That’s the real American immigrant story, not the one Trump is trying to tell, which is simply a version of immigration apartheid. The spin the Trumpists are trying to give this initiative is that it is aimed at curbing cheap immigrant labour streaming in and driving down domestic wages and depriving Americans of jobs.

But this theory does not pass muster. The reality is that the American working population is ageing and declining and migrants are filling only low wage jobs of scavenging, dishwashing, digging, gardening, cooking farming and fishing which nobody else wants. Also, they expand the earning base and consequently purchasing power and help expand the American economy. Grassroots politicians like Emanuel know how massively the poor working class immigrants have contributed to the growth and welfare of Chicago.

As of now, unemployment in the US is less than 4 percent. And more than 5 million jobs are lying vacant, mostly in blue collar, unskilled professions. Small wonder that The New York Times called Trump’s bill “A Senseless Immigration Proposal”. In a powerful and perspicacious piece entitled “Trump and the Policies of White Resentment”, Prof Carol Anderson of Emory University concluded in the Sunday Review:

“That white resentment simply found a new target (immigration) for its ire is no coincidence: White identity is often defined by its sense of being ever under attack, with the system stacked against it. That’s why Trump’s policies are not aimed at ameliorating white resentment, but deepening it. His agenda, fundamentally, is not about creating jobs or protecting programmes that benefit everyone including whites; it’s about creating purported enemies and then attacking them.”

Anderson calls this white resentment myopic and selfish because it refuses to acknowledge that when the larger nation thrives, so too do the whites. “Instead it favours policies and politicians that may make America white again, but also hobbled and weakened a nation that has squandered its greatest assets—its people and its democracy.”

Last week’s Quinnipiac poll showed Trump’s popular ratings hit a new low even among his hardcore white supporters. Some 61 percent disapproved of the way he was conducting himself. The New York Times commented: “Trump’s recent messages opposing transgender people in the armed forces, encouraging aggressive behaviour by the police, have been seen as efforts to recapture that base. His support for the immigration bill is more of the same.”

It is also an assault on an endearing American core value that stands out as a moral compass to the world. They are inscribed under the Statue of Liberty which beckons immigrants to American shore with these stirring welcoming words: “Give me your tired, your poor, your huddled masses yearning to breathe free, the wretched refuse of your teeming shore. Send these, the tempest-tossed to me. I lift my lamp beside the golden door.”