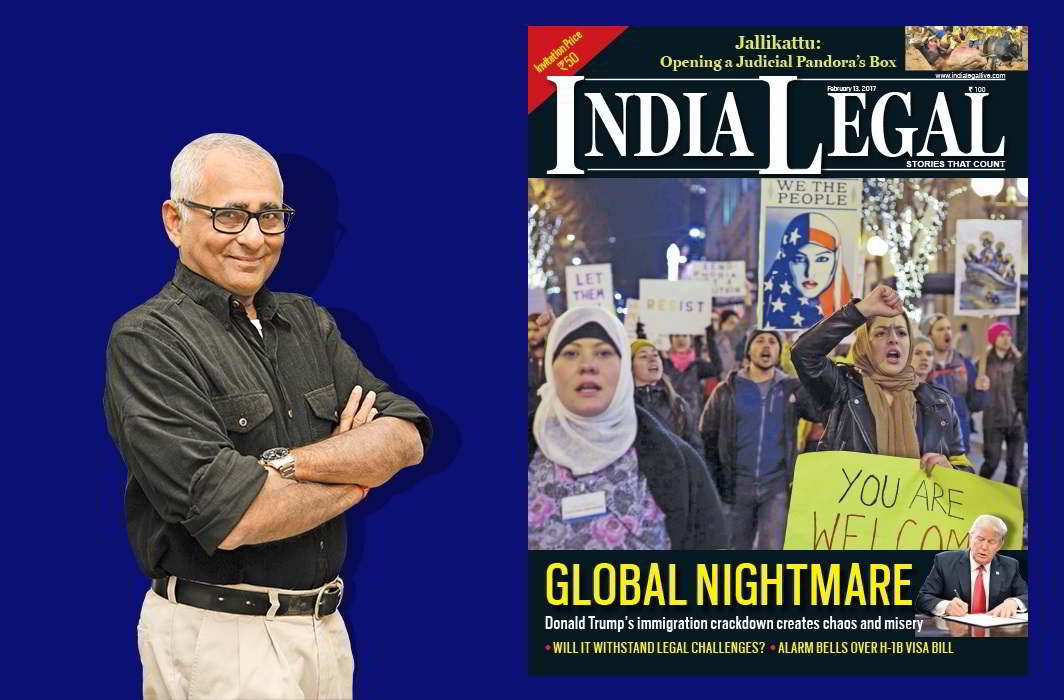 Starting with this issue of India Legal our fortnightly takes on a new avatar—we go weekly. The transition, long in the making, is logical and necessary. In the three years that the re-launched version of our publication has been on the stands and in your homes, the exigencies of news gathering and presentation have palpably altered. Thanks to a proliferation of digital news, the news no longer waits for the next edition of your newspaper, the newswire bulletin, or the evening or early morning TV programme… or a fortnightly.

It breaks here and now on your mobile phone, your app, your desktop. India has not only kept pace with these worldwide media trends but has also shown path-breaking enterprise in many instances. As an integral part of the Indian media scenario, India Legal does not believe in playing catch-up ball. We like to lead from the front in our chosen area of endeavour—legally-oriented news and analyses—in order to continue to “make the difference with the stories that count” as our public tagline says.

We started out as a fortnightly because bringing out a “politico-legal” magazine with regularity seemed at the time to be an onerous chore. Would there be enough new stories every two weeks to fill all those pages? Essays, legalistic briefs, case studies, debates, and the like, yes. But then, we did not set out to be a law journal or a text-book type tome intended for law students or scholarly rumination. What we set to become was a hard-nosed hard news magazine with current events and court- and lawsuit-driven breaking stories ruling our editorial pages.

As we trudged on, we discovered that the courts and our organs of governance were a gold-field of stories just waiting to be mined by editors who could focus on them and reporters who could ferret them out. And these stories touched every aspect of the lives not only of the legal and judicial community but also of every Indian citizen.

Touch any story making the headlines and a legal angle simply jumped out at you—but you had to have the editorial dexterity to latch on to it and tailor it to fit the niche perspective of your endeavour. Take any story that comes to mind—the National Judicial Appointments Committee, the behaviour of governors, BCCI,  the allocation of coal blocks and broadcast spectrums, rape laws, juvenile justice, case pendency, decisions of the Election Commission, cyber censorship, cleaning up the Ganges, qualification of electoral candidates, the fight for party symbols, the death penalty, public interest litigation, Green controversies, demonetisation, dates for presentation of the Budget,  cases of judicial misconduct… Jallikattu….You get the idea.

The courts, especially our Supreme Court with its changing justices, have been on an overdrive. Understaffed, overworked, and bearing the brunt of public criticism, the courts have, nonetheless, been a critical balancing mechanism trying as best as they can to maintain the constitutional checks and balances which keep this Republic and its government of the moment from going into a tailspin.

It was obvious that having created a niche product—along with sister concerns like APN News and our three major websites along with a social media team—and an editorial squad now fully able to grasp the niche focus—a fortnightly would simply not be able to keep up with all the news stories we wanted to break. It is frustrating to have a great exclusive legally-oriented story on your hands and then to have to wait for another fortnight to break it because the current issue cannot accommodate it. Also, when the Supreme Court is in session and issuing rapid-fire decisions by the minute from all its courtrooms, you’ve got to match that speed with your own editorial prowess which can become frustrating unless you’re doing it on a weekly basis.

A weekly has its own energy, its own electricity and if produced with editorial finesse, panache—it quickens the reader’s pulse. As I am sure this issue will do.

Our cover story is an American story which is a world story and an Indian story with massive international legal and constitutional implications for global politics. Donald Trump’s Executive Order on immigration has caused a global explosion whose shockwaves have spread from Somalia and Iraq to America’s Silicon Valley and Bangalore’s IT hub. Our coverage includes contributions from some of the best writers across the world—the human, legal, political, economic fallout.

And we bring you this package in our first weekly edition within the very week that these earth-shattering geopolitical events have begun to unfold.

—Inderjit Badhwar is Editor-in-Chief, India Legal. He
can be reached at editor@indialegalonline.com