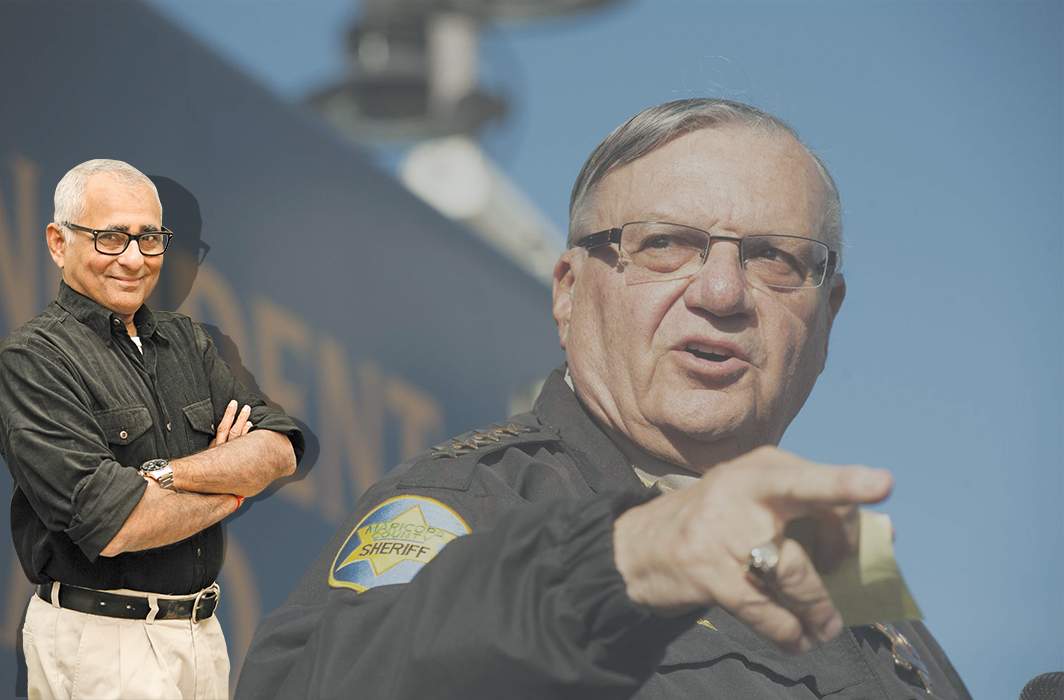 Washington DC: For many Americans, cutting across geographical, ethnic, linguistic and racial barriers, President Donald Trump has done the unpardonable by pardoning Sheriff Joe Arpaio of Arizona. Even though the President has almost untrammelled authority to pardon anybody for any federal crime, except impeachment, before, after or during a trial under Article II of the constitution, the chief executive must exercise it with due diligence and restraint in the larger interests of natural justice. It must be an act of compassion and mercy which should not sacrifice the larger interest of public order at the altar of a private political agenda.

And that is precisely what Trump did, prompting former Vice-President Joe Biden to remark that “we are living through a battle of the soul of this nation”. Strong, stirring words, indeed, but these passionate expressions of outrage are fairly commonplace today as Trump continues to defy all established norms of presidential propriety with each passing tweet and public utterance. His Charlottesville performance at which he virtually condoned a violent, white supremacist neo-Nazi march and then condemned the media as “fake” and America-haters for having reported his words live seemed to be the lowest point of his incumbency.

Then came the Arpaio pardon. Biden remarked that Trump’s “contempt for the US constitution and willingness to divide this nation knows no bounds. Now he’s pardoned a law enforcement official who terrorized the Latino community, violated its constitutional rights, defied a court order to stop, and ran a prison camp so rife with torture and abuse he himself called it a ‘concentration camp’.” 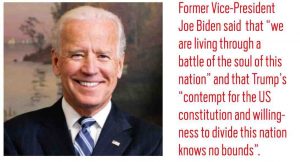 He openly defied a judicial order to cease and desist from his illegal activities and was held guilty of contempt of court. Trump pardoned him a week before his sentencing could be announced. Technically, by strict legal interpretation, Trump did nothing legally impermissible. He acted within his jurisdiction. But the larger issue now being debated is that what is technically legal is not necessarily ethical or even in the larger interest of the common good which the President is sworn to uphold.

But first, consider the irony. Sheriff Arpaio was a true blue Trumpist all the way. He eagerly spread the vicious “birther” lie, propagated by Trump during the election campaign that former President Obama was not born in the US and had falsified his birth certificate. He championed Trump’s racist anti-immigration policies which held, among other beliefs, that Mexican and Latino immigrants were criminals and rapists and that a 1,300-mile-long, impenetrable wall should be built along the US-Mexico border to keep Mexicans out and that Mexico would be made to pay for it. Arpaio gained Trump’s admiration and friendship not only because of his political support and ideological kinship but also because of his brutal special talent for rounding up innocent people on a mere hunch—it is called “racial profiling”—and putting them in chains regardless of their legal immigrant status. These were the people to whom Trump had referred to as “bad hombres” during his campaign last year.

The irony: To gain maximum viewer ratings for his pardon announcement, Trump chose the evening before Hurricane Harvey bombarded Houston, Texas. It would give him maximum mileage with his core constituency to which he panders and clings on harder as his popularity ratings continue to plummet. None put it more succinctly than The New York Times’ Charles M Blow. He quoted Trump as saying: “Actually, in the middle of a hurricane, even though it was a Friday evening, I assumed the ratings would be far higher than they would be normally.”

Blow commented: “Imagine what this man is saying. He used the horror and anxious anticipation of a monster storm menacing millions of Americans— particularly Houston whose population is 44 percent Hispanic—in a political calculation to get more ratings and more eyeballs on the fact that he was using the power of the presidency to forgive, and thereby condone Arpaio’s racism.”

Immigrants. Racial profiling. Charlottesville. Arpaio. They all followed carefully connected dots. The final dot was Trump’s televised pronouncement during the same speech that if Congress did not appropriate the estimated $10 billion to pay for the wall (now that Mexico had flatly refused to pay for it, much to the President’s embarrassment), he would not sign the annual debt ceiling increase (roughly equivalent to getting a vote on account to continue to pay for the expenses of running the government) and he would shut down the government!

But Hurricane Harvey, which he had used as his TV ratings multiplier to appeal to his core constituency, washed away whatever political brownie points Trump hoped to gain by threatening to bring the government to a halt if Congress did not release the money to build the wall. The wall would be a symbol of his anti-immigration policies, championed by heroes like Arpaio, designed to “make America great again”.

Such unprecedented havoc did Hurricane Harvey wreak—destroying America’s fourth largest city and oil capital—that any attempt by Trump to shut down the government would have destroyed whatever remains of his political career. Countless billions are now needed in government-spending to restore the damage and rebuild the businesses and lives of people. Not only that. Because of America’s negative demographic profile, there are acute labour shortages, especially in the blue collar sector, and the need to double and triple the number of workers needed to rebuild and re-construct will be paramount. There are an estimated 11 million undocumented alien immigrants in America right now. And Trump’s tough anti-immigrant policy will have to bow before the realistic need for the increased labour force needed to reconstruct the devastated south-west of the country.

And in view of the nearly limitless outlays in federal spending which will be required in terms of subsidies, grants, and lending, conservative Republican economics of tax cuts for the rich and cutting back on health and welfare schemes will have to fly out of the window if Republicans want even half a chance of retaining their majority in the Congress in 2018.

Even so, Trump’s pardon of Arpaio does not necessarily mean that he is holding all the constitutional aces. Whatever his motives, and even with Hurricane Harvey acting as a spoiler, speculation is rife that Trump may have had a double motive for the pardon. Special counsel Robert Mueller and various Congressional committees investigating Trump campaign’s collusion with top Russian operatives to influence an anti-Hillary outcome of the 2016 presidential election are turning on the heat. They are following financial and money laundering trails, one of which has led directly to the doorstep of former Trump campaign manager Paul Manafort, whose premises the FBI recently raided in a pre-dawn operation.

Manafort, with close commercial ties to Ukranian government officials associated with Russian President Vladimir Putin, was one of the persons who attended a June 16, 2016 meeting at Manhattan’s Trump Tower. It was attended also by Trump’s son, Donald Jr, and his son-in law Jared Kushner and organised by Russian operatives who had promised them “dirt” on Hillary Clinton and the Democrats. More recent revelations include details of mails between Trump’s close financial advisers and Russians close to Putin regarding building a Trump Tower in Moscow even as Trump had begun his presidential campaign.

The Arpaio pardon, analysts, believe could also double as a dry run for Trump. He has tangled acrimoniously several times with the judiciary, starting with his crude criticism of judges who refused to uphold his blanket anti-Muslim travel ban. His pardon is another executive challenge to the judiciary. He has virtually snubbed a sitting judge by pardoning a police chief found to be in criminal contempt of court even before the sentencing.

Presidents have exercised their power pardons before. But there is usually a five-year cooling period after the sentencing, and usually after intensive consultation with a special office created for this purpose within the Department of Justice. Also, most pardons come toward the end of a President’s term. Trump followed none of these eminently conservative precedents.

His exercise of this prerogative came barely seven months after his swearing-in. There is no gainsaying that this is a signal to law enforcement officials across the country to abandon restraint in their treatment of suspects. He will pardon them.

The gambit is not without risk. The American system of checks and balances and its aversion to abuse of power— especially obstruction of justice—does not lie down and play dead without a fight. Already, Special Counsel Mueller has opened up lines with state-level prosecutors who could bring state-level charges and indictments. The President’s power of pardon is limited to federal offenses and not to prosecutions at the state level. And the President could open himself up to impeachment if enough pressure mounts on Republican members of the House from their constituents.

Presidents have exercised their power pardons before. But there is usually a five-year cooling period after the sentencing, and usually after intensive consultation with a special office created for this purpose within the Department of Justice. Also, most pardons come toward the end of a President’s term. Trump followed none of these eminently conservative precedents.

Philip Allen Lacovara, a former solicitor general in the Justice Department who helped in the Watergate prosecution wrote in the Washington Post:

“As with any other presidential power, the power of pardon is constrained by the ordinary requirements of federal law applicable to all federal officials. For example, if representatives of a pardon seeker arrived in the Oval Office with a bundle of cash that the president accepted in return for a pardon, there is little doubt that the president would be guilty of the crime of bribery…. If Trump were to pardon any of the figures in the current Russia investigation, his action would certainly impede or obstruct the due administration of justice, as the courts have broadly construed that standard.

“It would not be difficult to imagine Mueller making the case that the motive behind such interference was ‘corrupt.’ As the Founding Fathers made plain, the purpose behind the pardon power is to extend mercy to those who have offended and have demonstrated remorse. Using the pardon power to protect the president’s own interests against embarrassment or exposure is not legitimate. Rather, a crassly self-interested exercise of presidential power to impede the due administration of justice is the very antithesis of the president’s most solemn oath—‘to take care that the laws be faithfully executed.’”

As Ron Fein, Legal Director of Free Speech for People summarised it, no president can use the power of pardon to immunise lawless officials from consequences for violating people’s constitutional rights.