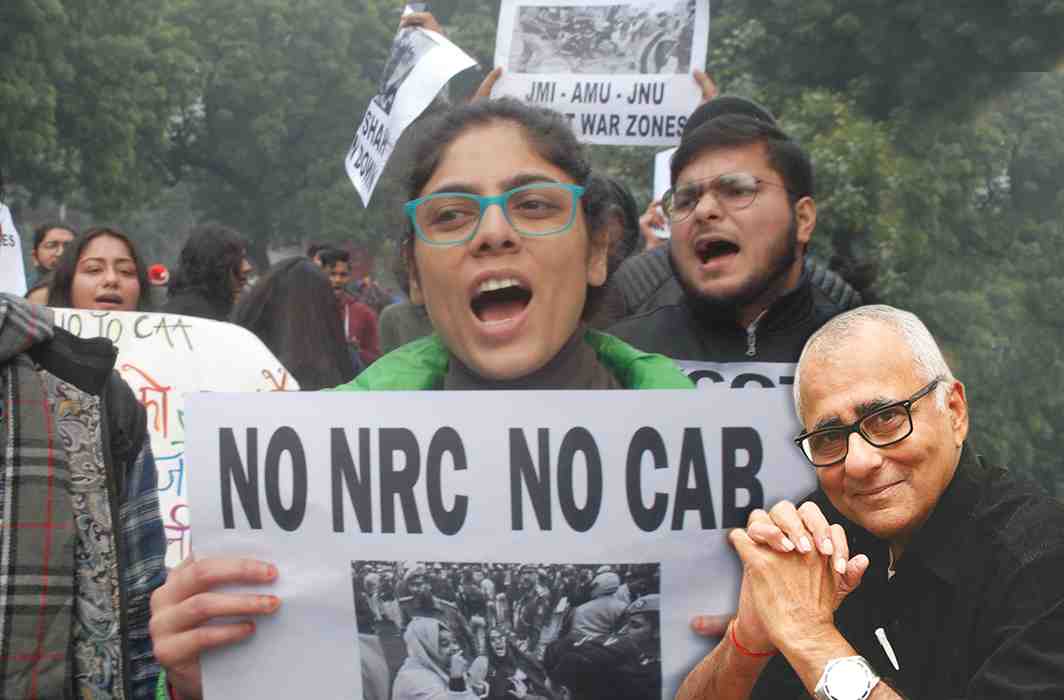 The most popular cliché about India is that it is a land of extremes. That generally refers to the rural-urban, rich-poor chasm. But in the wake of the snowballing university uprisings against the Citizenship (Amendment) Act (CAA)—the latest example of India’s plunge into divisiveness—it has come to signify something quite different. The rise of violent pseudo-patriotism, fuelled by take-no-prisoners TV news anchors and right-wing adherents, has created a sharp societal divide based on the premise of “Either you are with us or you are against us”. The result has been a shrinking of the middle ground, the space occupied by those with a neutral view.

The danger of degenerating into an “either or” society is loss of all the attributes that make for credible democracies—freedom of speech and opinion, criticism of the government, peaceful assembly and the ability to make informed choices. Sadly, it’s a worldwide phenomenon. The ascendancy of Donald Trump has polarised American society like never before and the space for reasoned debate and conversation has vanished. In India, chest-thumping, heated rhetoric and liberal use of the phrases “anti-national”, “pro-Pakistani traitors” and “pro-terrorist urban Naxals” have resulted in shrinking the middle ground. Several years ago, an article in Pakistan’s leading newspaper, Dawn, put it more bluntly: “Both states are being too casual about weaponising society and public opinion against the other country. The media is catering to that market.”

Significantly, the “either or” situation always follows a crisis or military ambition. After the 9/11 tragedy in America, President George Bush famously used this phrase, declaring that “every nation, in every region, now has a decision to make. Either you are with us, or you are with the terrorists”. Benito Mussolini declared in speeches across fascist Italy: “O con noi o contro di noi”—You’re either with us or against us.” Turkish President Recep Erdogan, after the suicide bomb explosion in Istanbul on January 12, 2016, said: “Pick a side. You are either on the side of the Turkish government, or you’re on the side of the terrorists.”

It’s a worrying development since it infects everything, connected or not. Bollywood stars are shamed and slandered for their public support of dissenting views. The non-combatants who call for restraint in dealing with adversaries are branded as “pseudo-liberals” as if it were some repulsive, contagious disease. It’s the age of polar opposites where moderate opinions are banned, even un-Indian in a sense. Plurality is what defines any democracy and makes it better. Elbowing out the secular view and the independent voice is the antithesis of what a democracy stands for. 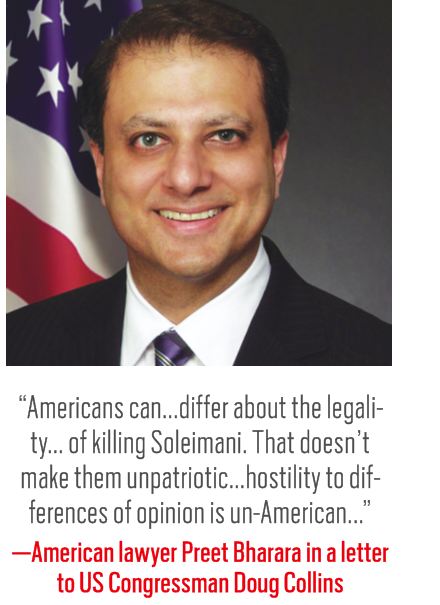 In this context, I reproduce a recent open letter from Preet Bharara to US Congressman Doug Collins of Georgia. Bharara, of Indian origin, is an American lawyer who served as the United States attorney for the Southern District of New York from 2009 to 2017. As a US attorney, Bharara earned a reputation of a “crusader” prosecutor.

“Dear Representative Doug Collins, “You are not my Congressman, and while I am ever thankful for that fact, after seeing your performance on Fox News on Wednesday night, I’m not sure you are fit to be anyone’s Congressman. Specifically, I saw you blithely assert on national television that Democrats ‘are in love with terrorists. We see that they mourn Soleimani more than they mourn our Gold Star families.’

“No American is ‘in love’ with terrorists or ‘mourns’ the death of that Iranian general on an airstrip in Baghdad. Many of us do, however, mourn the death of decency, honesty and reason here at home.

“I realize that you are a politician and that hyperbolic, hyperpartisan claptrap is the unfortunate fashion of the day. But even allowing for the new normal of nastiness in political rhetoric, your casual slur of countless good Americans hits a new bottom. Americans can, in good faith, differ about the legality or efficacy of killing Soleimani. That doesn’t make them unpatriotic or lovers of terrorists. It is hostility to differences of opinion that is un-American.

“I understand that politics is a tough racket. I served as a Democratic staffer in the US Senate. I get that terrorism is a threat. I prosecuted terrorists as a United States attorney, working just yards from Ground Zero. I know of the particular evil posed by Qassem Soleimani. My office prosecuted plots orchestrated by him and the Quds Force, including the conspiracy to assassinate the Saudi ambassador to the United States in 2011.

“So, I have some idea of what is at stake here when it comes to terrorism. As you well know, Congressman, terrorists do not kill Republicans or Democrats. They kill Americans.

“You are not a talk radio host or a carnival barker. You are a pastor, an attorney and a sitting member of Congress. Therefore, the evidence would suggest you should know better. To utter such garbage, which you know to be false and defamatory, goes against all the training and teaching you must have received. But you got your cheap shot across, and perhaps that’s all that matters to you.

“To be clear, Congressman, I am not making some old and familiar naive call for a return to ‘civility’ in our politics. I don’t have much hope for that in the immediate future. I just want people like you to knock off the worst scurrilous nonsense. I’d hope that would be possible for a member of the House who happens to be the ranking member on the Judiciary Committee.

“If we are going to come together, protect the homeland and heal the hearts of people who have suffered the scars of terrorism, we need our leaders to do better than lazy trash talk.

“Learn that volume and wisdom are not the same thing.

“You were elected to lead. Please give it a try.