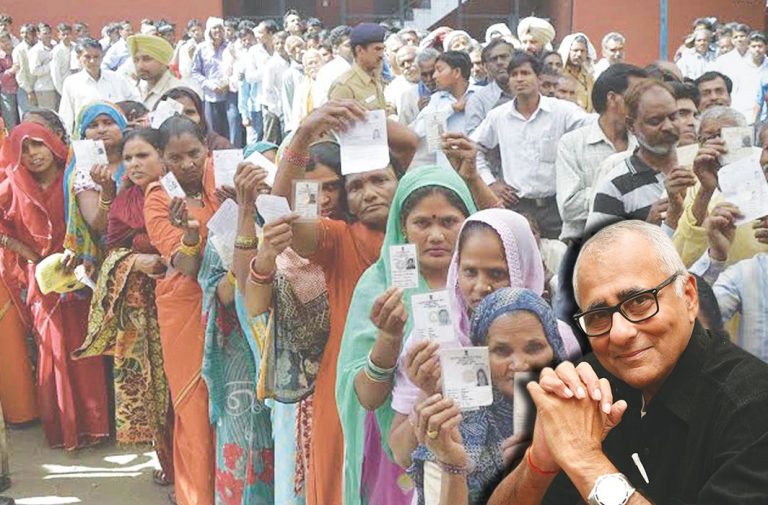 The issue of holding simultaneous elections to the Lok Sabha and state assemblies continues to hog the headlines as India inches closer to state elections followed by the national grand finale in 2019. The ruling BJP has floated several trial balloons on the issue, including the possibility of achieving this goal through the legislative process, which would probably entail a constitutional amendment. Several months ago, the Law Commission had released a preliminary draft white paper in favour of the idea. But can this be done in 2019?

Even though it found several positive points to support its own position, the Commission, in an update of its earlier draft, as it nears the end of its term under the chairmanship of Justice (retd.) Balbir Singh Chauhan, has cautioned against moving too expeditiously, keeping in mind the existing framework of the Constitution. The bottomline drawn by the panel is that all stakeholders must engage in a healthy and sustainable debate on the issue because simultaneous polls are “not possible within the framework of the Constitution”.

In a recent interview to The Indian Express, Justice Chauhan stated that his panel had raised several fundamental questions and placed them for public discussion. “We are very happy to have been able to start a robust discussion on this. Fifty MPs came to argue. We want to strengthen the faith of the people in the system. We did not want to give a report to favour anyone. We did not want to submit a half-baked report.”

The Commission, in effect, raised the seminal issue of whether simultaneous polls would “tinker with democracy, basic structure of the Constitution or the federal polity of the country”. The report says: “The Commission has ensured that the amendments to the Constitution and other statutes are kept to the barest minimum….”

Even as the Election Commission is studying the report and various options it suggests, the Law Commission has made it clear that in the three states where elections are due in January 2019 (Chhattisgarh, Madhya Pradesh and Rajasthan), and Mizoram (at the end of 2018), “extension of up to six months is required to attain synchronization with the elections to the House of the People in 2019, which will entail amendment to Article 172 of the Constitution”.

India Legal in its February 12, 2018, editorial had already picked up the issue right after Prime Minister Narendra Modi had publicly floated the idea. The write-up delved into every possible angle involved—legal, political and economic—and analysed the pros and cons as well as the background to find out whether the idea thrown up by Modi had any basis or it was merely backed by political expediency. It is now pertinent and relevant to remind our readers about the salient points of that edit:

Actually, the proposal to hold national and state elections simultaneously preceded his public advocacy of it by nearly two decades. As early as 1999, the Law Commission, chaired by Justice Jeevan Reddy, supported the idea. More recently, the Parliamentary Standing Committee on Personnel, Public Grievances, Law and Justice came to a similar conclusion. The Modi government, therefore, had a readymade political wicket on which to bounce its own ball and avoid public criticism of trying to queer the pitch in its own favour.

The ball was set rolling again when the prime minister, in a rare interview to private television, promoted the idea as healthy and desirable for Indian democracy. Shortly thereafter, he received backing on the eve of Republic Day from none other than the president of India (whose add­ress is usually cleared by the Prime Minister’s Office), who virtually repeated what former President Pranab Mukherjee had said earlier: “With some election or the other throughout the year, normal activities of the government come to a standstill because of code of conduct. This is an idea the political leadership should think of. If political parties collectively think, we can change it…. The Election Commission can also put in their idea and efforts on holding the polls together and that will be highly beneficial.”

Two former chief election commissioners, N Gopalaswami and SY Quraishi, have publicly supported the concept. Gopalaswami was completely gung-ho, urging the ruling party to display the political will to make necessary constitutional amendments to implement the measure, while Quraishi, who saw merit in its cost and time-effectiveness, counselled obtaining a wider political consensus. The NITI Aayog, a government-controlled think-tank that took on many of the functions of the old Planning Commission after Modi became prime minister, also jumped onto the bandwagon with its own report, forcefully concluding that, as is the case of all long-term structural reforms, “implementing this measure would also cause some short-term pain. However, this would be a stepping stone towards improved governance and a larger initiation of electoral reforms—a desperately needed measure to re-boot the Indian polity”.

Strong words, indeed. But all the advocates of this “reform”, taking shelter in the recommendations of the 170th report of the Law Commission as well as the Parliamentary Committee, seem to ignore that both cautioned against any impulsive move in this direction without widespread consultation. The Law Commission was careful to suggest phasing the measure in but with the ad­vice and consent of all chief ministers. And the Parliamentary Committee also warned that clubbing all national and state elections “can (only) be possible with the cooperation of political parties which represent the political will of the people”.

The ruling BJP has floated several trial balloons on simultaneous polls, including the possibility of achieving this goal through the legislative process, which would probably entail a constitutional amendment

But Prime Minister Narendra Modi is a man in a hurry. He stated recently: “If India is to meet the challenge of change, mere incremental progress is not enough. A meta­­morphosis is needed….My vision for India is rapid transformation, not gradual evolution.” But the Parliamentary Committee also counselled: “It is difficult to quantify the gains from simultaneous elections. This would require estimating impact of those policies which should have been done but could not be done due to electoral compulsions. Since the existing cycle of frequent elections still works in one way or the other, one can argue why get into sweeping amendments of the Constitution when we don’t know the quantum of benefits through this reform? True, the existing system is not entirely broken. But, the political class is duty-bound to provide citizens a governance framework that best fits the needs of its population—a large proportion of which is young and demanding. Elections are meant to elect Governments who are then supposed to focus on rapid and transformative national development.”

Critics have argued that such a step may undermine the depth and breadth of Indian democracy, and that its operational feasibility is also a challenge. But as the Association for Democratic Reforms points out, the concept of simultaneous polls isn’t new to India. The first elections to the Lok Sabha and all state legislative assemblies were held together in 1951-52. However, with the premature dissolution of some state assemblies in 1968 and 1969, this cycle was disrupted. In 1970, the Lok Sabha itself was dissolved early and fresh elections were held in 1971.

As a result, says political analyst Nilesh Ekka, for the last 48 years, there have been separate polls for electing central and state governments. He also analyses the “many hurdles in implementation of simultaneous elections”. These include: the proposal could be motivated by political considerations as voters tend to vote for the same party at the central and the state levels during simultaneous elections; the Constitution might be misused if the Parliament/assembly is prematurely dissolved for political gains as Articles 83(2) and 172 (1) of the Constitution provide for a set term of the Lok Sabha and assemblies; the possibility of its implementation every time might not be a reality as state assemblies can be dissolved at any time without completing the fixed term; administrative and security concerns associated with simultaneous elections should be addressed at length before implementation.

“All this presupposes that the Lok Sabha and Legislative polls will result in stable governments that last their entire tenures and so will regimes in the states,” he says. Only in the last 15 years have all three Lok Sabhas lasted their full five-year terms. He points out that the anti-defection law and Supreme Court judgment in SR Bommai vs. Union of India [1994] also ensure stability and continuity of legislative bodies to complete their full terms.

There could be another, perhaps intangible, benefit of frequent elections in a large country like India: They could serve to keep governments on their toes and periodically remind them that people power is the best safeguard of democracy and accountability.