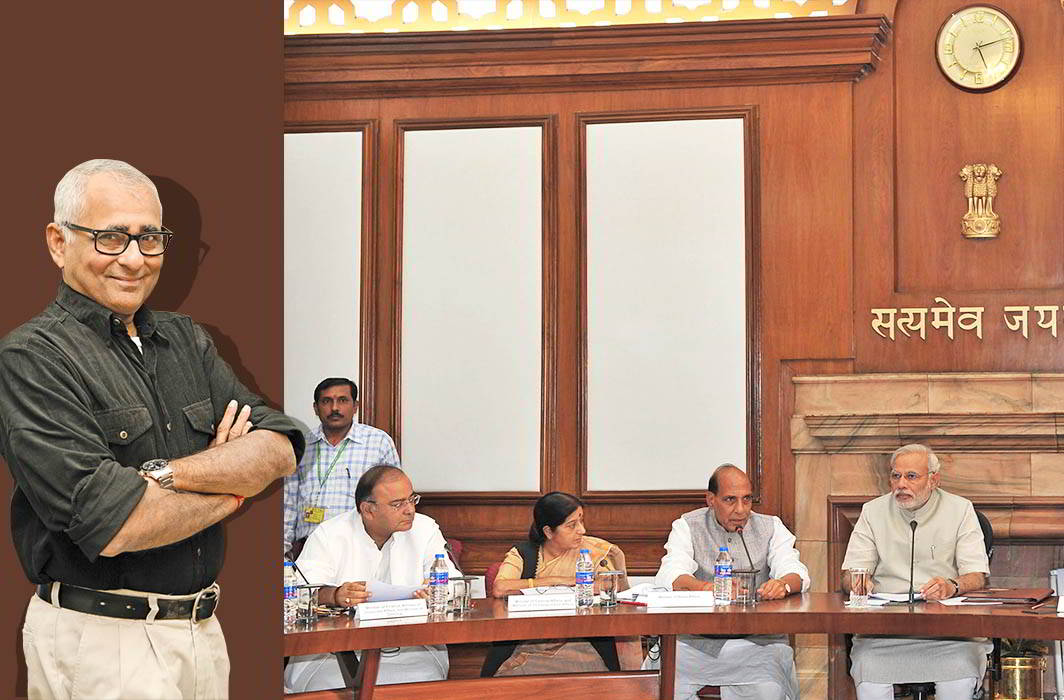 The Indian prime minister is a magician at making storms disappear into a teacup. But try as he might, he is finding it a mite difficult in trying to weather the gusts of Hurricane Economy. This is perhaps because this time the climate is of his own making. And somewhere along the line, it will wear his political Teflon coating thin.

There’s an evergreen American saying, “If it ain’t broke, don’t fix it.” In other words, if something is not seriously in need of repair or functioning normally, do not try and repair it; it may backfire or get worse. Narendra Modi’s advisors are obviously unaware of this little homily. Or why else would they have indulged in the kind of economic adventurism that plunged them into the never-never land of demonetisation and the hastily conceived and poorly executed Kingdom of GST?

Why the tearing hurry? What was the pressing need? After all, just over two years ago, the economy was swimming along at a decent pace of over 8 percent growth, (with the World Bank and IMF making rosy predictions for the future), inflation was under control, FDI was pouring in, the markets were booming, consumer spending was healthy, joblessness was on a holding pattern, forex reserves were rising, rural cash liquidity and purchasing power were steady. And Big Business was in a mood to invest.

The downturn of 2010 had been more or less been reversed. In other words, the economy wasn’t broke. It didn’t need fixing. It needed more priming. It was ripe for speedier reform—lesser babu raj, more incentives for investors to counter China’s allure, tax cuts for the professional class, encouraging competition, discouraging crony capitalism, banking reform to curtail NPAs, safeguards against tax terror, and, yes, a simplified, low-rate GST system to unify the Indian market.

These were achievable goals. Little did we think that Modi, with his uncanny instinct for kicking so accurately at the target, would ever score a goal against himself and face an economic slowdown circa 2008-2010, or possibly even worse. The world’s most brilliant economists and specialists, among them Nobel Laureates Paul Krugman and Amartya Sen and former RBI chief Raghuram Rajan, warned against the long-term perils of demonetisation. They were dismissed as so many Jeremiahs or Hoseas.

Today, many of Modi’s well-wishers and former allies and elder statesmen of his own party are sounding alarms. Former Finance Minister Yashwant Sinha and former Disinvestment Minister Arun Shourie have called the government’s economic policies an unmitigated disaster which have not only put development in reverse gear but also created misery for farmers and the unorganised sector and small traders.

But these are big, prominent names and convenient targets for alt facts and troll brigades. More worrisome for the BJP government are critics who are not sitting ducks, like the RSS-affiliated Swadeshi Jagran Manch, the All India Kisan Sabha, the Bharatiya Mazdoor Sangh, (also affiliated with the RSS) and hundreds of thousands of farmers who have marched in protest in BJP-ruled states like Rajasthan, Uttar Pradesh, and Maharashtra. Textile and jewellery traders in Modi’s backyard, Surat and Ahmedabad, have also taken to the streets in mass protest. Their grievances, too, centre on falling farm incomes and the massive disruption in supply chains caused by demonetisation and the imposition of GST.

Allies like both factions of the Shiv Sena are mounting frontal, often crude attacks on the government’s economic policies with no holds barred. And some media outlets whose promoters are recognised as being generally sympathetic to the BJP government with a decidedly soft corner for Modi, have become more strident in their reporting and criticism. Among them is the leading website Firstpost.

The prime minister appears to have taken this rising tide of critical opposition seriously. But being an eternal optimist, he recently derided his critics as “pessimists who spread despair”. But what was significant was his admission of a slight slowdown in the economy as well as glitches and problems with the GST system which he promised would be fixed.

He compared the pessimists to Shalya, the Kaurava charioteer in the Mahabharata who tried to paint a negative picture of the raging battle against the Pandavas. In his widely reported speech, the indefatigable Modi tried to put a positive spin on the economy, still hanging on to his promise of acchey din, but a friendly website took him to task in the very headline to that story, a sentiment echoed by many other several analysts: “PM’s data is impressive but it’s selective and fails to answer tough questions.”

Little did we think that Modi, with his uncanny instinct for kicking so accurately at the target, would ever score a goal against himself and face an economic slowdown circa 2008-2010

One reason for that is that among the “pessimists” is none other than the Reserve Bank of India headed by Modi’s own choice for governor, Urjit Patel. You need not turn to any newspaper or media source for details. Go straight to the RBI website and click on the “Fourth Bi-monthly Monetary Policy Statement, 2017-18 Resolution of the Monetary Policy Committee (MPC) Reserve Bank of India.” 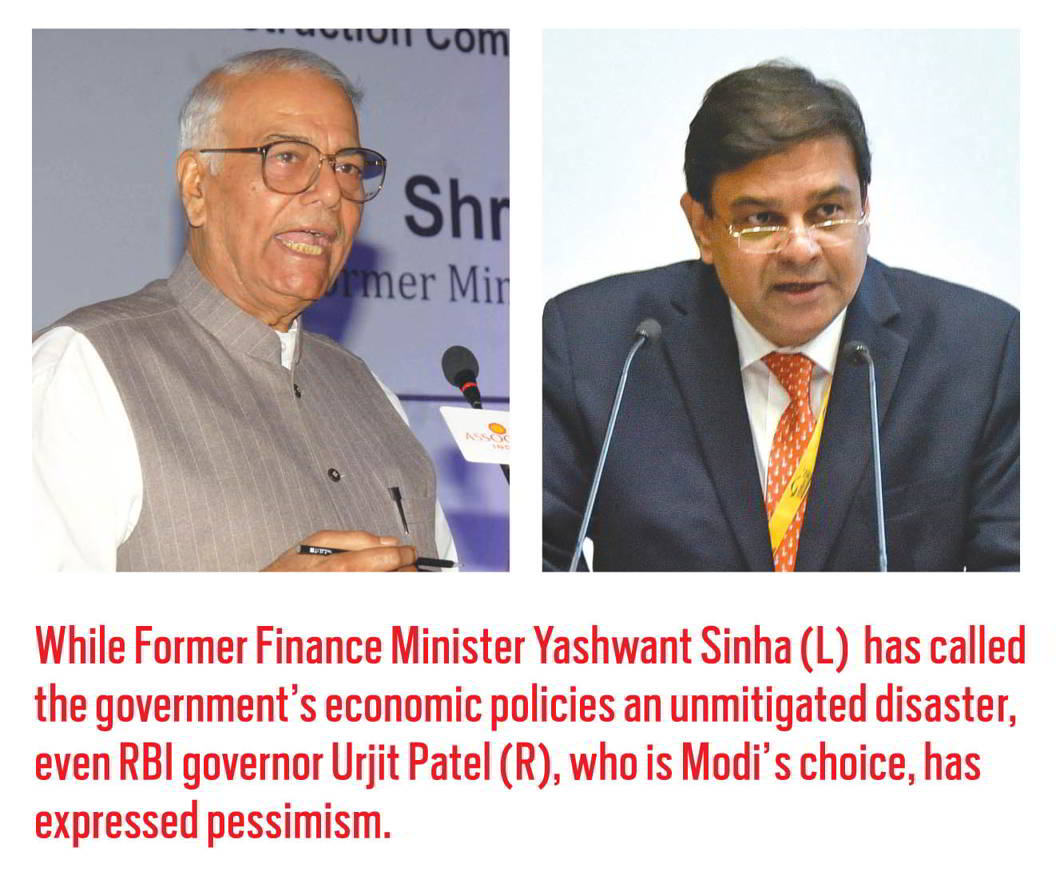 It says in no uncertain terms that while the world economy is on the upswing following the terrible recession years, the Indian economy, which was among the fastest growing in the world, has been unable to take advantage of this. Here are highlights of the report:

Being an eternal optimist, Modi recently derided his critics as “pessimists who spread despair”. But what was significant was his admission of a slight slowdown in the economy as well as glitches with the GST system

In other words, the MPC is saying that India is lagging behind because the government tried to fix something that wasn’t broken and wound up making things worse which now needs to be fixed if we are to get out of the crisis. And it pulls no punches on GST. This is not Yashwant Sinha or Shourie speaking. This is the Voice of RBI.