Home people Letter From The Editor - (Inderjit Badhwar) WILL THE NON-YES-MEN PLEASE STAND UP? 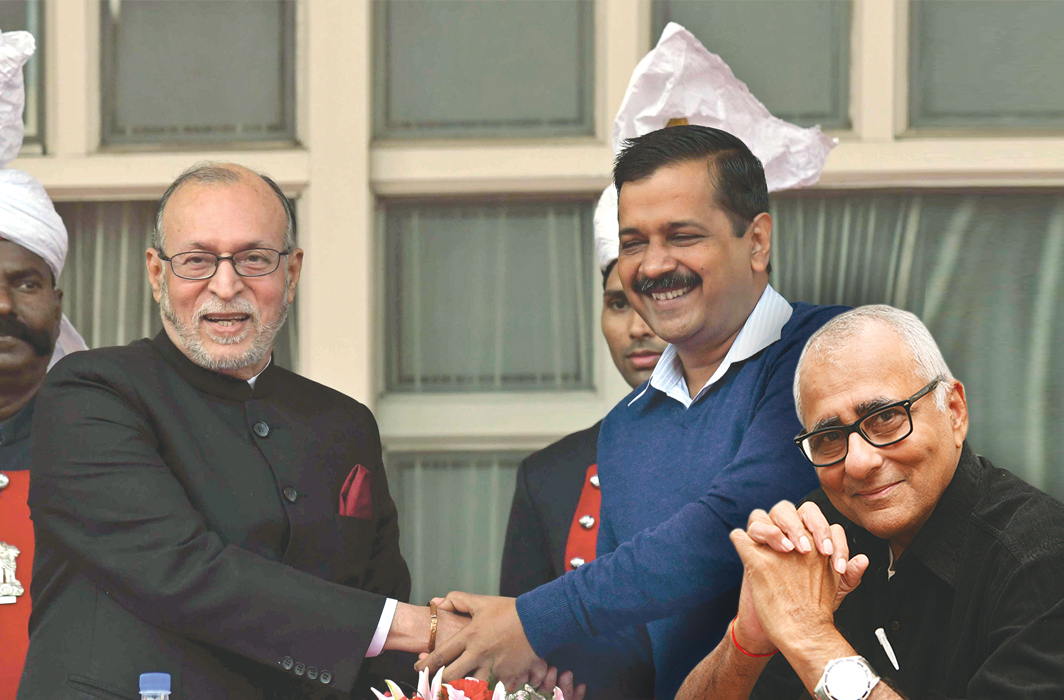 Many watching the reality show unfurling in the Delhi lieutenant governor’s waiting room, where the chief minister and three of his cabinet colleagues staged an unprecedented sit-in, found it laughable. I found it sad. That a popularly elected chief executive along with his deputy, and the ministers of public works, and rural development should be sitting on a dharna—no matter how plush the sofas may look in the widely published photographs—shows there’s something rotten in the state of Delhi.

Most worrisome is the charge made by Kejriwal that the L-G is actually aiding and abetting and encouraging a “strike” by IAS officers in charge of running Delhi, bringing the capital to an administrative standstill.

The nation’s capital has been gripped by a governmental paralysis never before seen no matter how politically surcharged the atmosphere in previous dispensations. But what is truly dangerous to the administrative jurisprudence of the nation is that the  bureaucracy—in this case the elite Indian Administrative Service (IAS)—has become, willy nilly,  a full-fledged participant in the power struggle between a democratic legislature answerable to its voters and a politically installed lieutenant governor who reports to his puppeteers in the central government.

Delhi is a hybrid state. It votes in a government exactly as do other states of the Indian Union. But while other state governments control the police and the bureaucracy within their territories in order to carry out the mandates assigned to them by the Constitution, Delhi’s chief minister must answer to the LG, a de facto and de jure viceroy.

The relationship between an L-G or a governor appointed by a rival party ruling at the centre and the party in power in states is tenuous and strained at best. In the bad old days, the centre simply or­d­ered governors to dismiss lawfully elected state governments they did not like. But in the light of court decisions and popular revulsion at this practice, this is no longer possible in the absence of a demonstrable and complete breakdown of law and order. So a hostile centre has had to find ways— such as delaying funds for projects or engineering mass defections in the assembles—in order to needle or destroy “hostile” state governments.

Why this situation has not led to national havoc for most of India’s existence as an independent country is because of the concept of delegated legislation—the power and the duty of the bureaucracy to give permanence, security and stability to the everyday life of ordinary people. That is why the babus of this country are known as the guardians of the “steel frame” which keeps India steadily moored to a well-heeled—albeit creaky and corrupt—administrative dock.

The elite corps of this system is the IAS. Government servants swear their oath of loyalty to the Indian Constitution and not to their political bosses, including the prime minister. They are mandated to carry out the laws passed by the lawmakers. They have the duty not to obey illegal orders in the higher interests of safeguarding the founding principles of the Republic and the ideals of democracy. And for this reason—so that they are not victimised by their political bosses for failing to carry out illegal orders—they have an unusual degree of job protection and grievance redress mechanisms.

Unfortunately, the bane of Indian democracy is its politicisation. For decades, loyalists have been rewarded by their political bosses, while upright officers have been excoriated as whistleblowers or transferred to bureaucratic Siberias. The Gulagisation of the non-yes-men is endemic to this system.

The hybrid nature of Delhi’s “statehood” apart, the current crisis has its roots in the “yes-men” who have become the weakest slats in the bed of India’s democracy. To change the metaphor, they are weakening the steel frame. Lieutenant governors are simply loyal supercrats. Who can deny that Prime Minister Modi reacts with the same horrified revulsion at the very mention of Arvind Kejriwal—who ended the NAMO electoral magic in Delhi in 2015—as did Inspector Clouseau’s boss in the Pink Panther? And who can deny that the suave and erudite Najeeb Jung, a former Madhavrao Scindia loyalist, danced to Modi’s tune and made political life a living hell for Kejriwal and his government? Who can deny that L-G Anil Baijal is doing anything different? Kejriwal told the press: “The PMO and the centre are unleashing the lieutenant governor, IAS officials and agencies like the CBI, ED, the income tax department and the Delhi Police on us to stall the government’s work.”

The CBI and the Anti-Corruption Branch have registered 14 cases against AAP ministers and their relatives since February 2015 when the AAP government was formed, but there hasn’t been an arrest in even one case. “Cases have been registered against me, (deputy chief minister) Manish Sisodia, (minister) Satyender Jain. I want to know what happened to all these cases. No one has been arrested in these cases. Why don’t central agencies first arrest us in such cases? The only motive is to stall the AAP government’s work,” said Kejriwal.

So Kejriwal, the showman and activist, has hit the streets again—starting from the L-G’s visitors’ room—to showcase his grievances. The IAS Officers’ Association denies they were on strike. They released pictures and shot off tweets to disprove Kejriwal’s allegations. Seeking the prime minister’s intervention to end the “strike”, Kejriwal wrote to Modi: “Due to strike, several works are being affected. As L-G is doing nothing to end IAS officers’ strike, Delhi government and the people of Delhi request you (PM) with folded hands to get the strike called off immediately so that works of Delhi can resume.”

Kejriwal, mostly treated as a political pariah because opponents considered him a holier-than-thou hypocrite, is finding not only public support, but also sustenance from unexpected quarters. In today’s surcharged atmosphere of the gathering opposition unity movement,  leaders like Akhilesh Yadav, Tejashwi Yadav, Sitaram Yechury, Sharad Yadav, Brinda Karat, Kamal Haasan and Shatrughan Sinha have tweeted in favour of him.

To compound the crisis and anarchic situation, the Delhi Government Employees Welfare Association has threatened to rally in front of chief secretary Anshu Prakash’s office to press for the restructuring of DASS (Delhi Administrative Subordinate Services) and steno cadres of the government.

In the larger interests of the nation and Delhi’s health, educational and hygiene services, this is no time to play chicken or to see who blinks first. The priority is service to the nation, and who is better equipped to offer this than the steel frame? For starters, in case some of our IAS officers are confused about their priorities or where their loyalties should lie, they need to look no farther than the revisions made in the 1968 All India Service Rules by Modi as soon as he took office as prime minister in 2014: